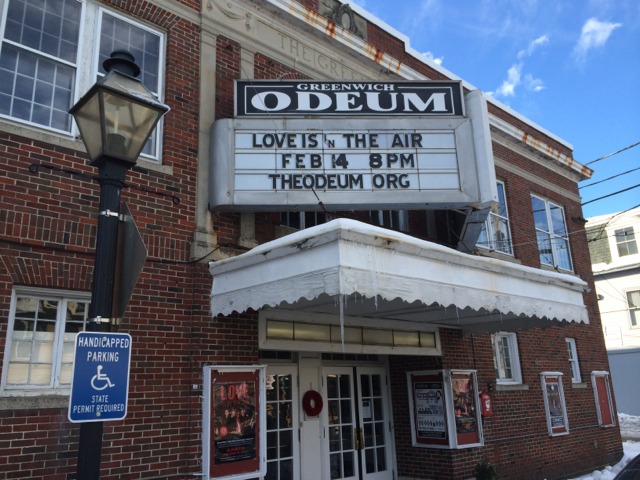 Steve Erinakes, who guided the transition of his family-owned movie theater to the Greenwich Odeum nonprofit theater it is today, is suing the Odeum over what he says is its refusal to recognize his mortgage on the building.

The lawsuit names as defendants the Odeum Corporation and Erinakes relatives Stefan Coutoulakis, Elissa Marie Coutoulakis and Kristen Juliann Coutoulakis, who retain small shares in the property according to the deed.

“The promissory note executed by the Odeum Corporation on Dec. 31, 1991, and the mortgage remain in full force and effect and the mortgage is a valid lien on the property at 59 Main St.,” the complaint asserts.

Erinakes is looking for the promissory note and mortgage to be recognized as “valid and enforceable” and for the defendants to cover attorney’s fees and “such other such relief as this Honorable Court deems appropriate.”

“Let’s go see what the judge says,” said Erinakes in an interview Tuesday. “If I’m going to lose it, I want a judge to say it, not Jeff Gladstone and Frank Prosnitz.”

Erinakes was referring to Frank Prosnitz, head of the Odeum board in July 2012 when he and board member Jeff Gladstone told the Town Council that Erinakes’s mortgage on the theater was no longer valid and that the Odeum owned the theater.

Prosnitz, who had been on the Odeum board since nearly it’s inception, was replaced as board chairman in June 2013. Gladstone resigned sometime between Nov. 2012 and June 2013.

Current Odeum President Kevin Muoio declined to comment, noting that the board had not yet been served with the complaint.

The Erinakes family owned and operated three movie theaters in East Greenwich for several decades in the 1900s, including the Hilltop drive-in on Post Road (where St. Elizabeth’s Home now sits), and the Kent and Greenwich theaters on Main Street. The Greenwich Theater, at 59 Main St., was the last to close, in 1990.

After the closure, Erinakes decided to turn the theater into a nonprofit venue for live events. It reopened in 1994 as the Greenwich Odeum but in order to acquire nonprofit status, the theater building was “sold” to the Odeum.

“It was something that was arranged 20 years ago so we could acquire nonprofit status,” Erinakes said. “My mother ended up selling it to get it out of her name and in exchange we gave her a mortgage.”

He said the reason for the mortgage was in case the Odeum failed, so the family could foreclose on it and retain the building. Blanch Erinakes, Steve’s mother, left him the mortgage when she died in 1999, he said.

Erinakes acknowledges there were never any payments made by the Odeum to Blanch Erinakes or, later, to Steve.

“It was a fun project. The money was never an issue for me. It was just a formality,” said Steve. “In a 20-year period, I never asked for a payment, never even talked it. My heart wasn’t in the money – my heart was in the program.”