End of Era: After 38 Years, Hartmans Sell Back to Basics It was the grandchildren that did it. Bob and Maryann Hartman opened Back to Basics in 1982 and have run it ever since, raising three children and moving the business three times (all on Main Street in EG) in the process.

They might have kept on running the natural foods store that is one of the oldest businesses on Main Street but then their children starting having children. Suddenly, as much as Maryann loved interacting with customers, learning new things, and sharing that knowledge, she just wanted to be able to spend more time being a grandma.

“That was it for me. I still have quite a bit of passion,” she said. “But when I look at where I want to put my hours, I can’t put 40-plus hours of work here and still give to my grandchildren.”

Bob, for his part, wanted that grandpa time too, in addition to spending more time cycling, his outdoor passion.

And running the store part-time, that wasn’t going to cut it.

“It’s tough to do it well and cut back,” said Maryann. “We’ve always put both feet into it and we’ve done it as well as we could. It’s pretty tough to just do it part time.”

So, as of Dec. 26, Back to Basics was sold to Fran and Ron Shaver. Bob and Mary Ann will still be around on a part-time basis for another month or so.

The Hartmans opened Back to Basics in 1982 at 250 Main St. (now Clementine’s Ice Cream) after getting excited about natural foods during a two-year stint in California right after they got married. Bob, an accountant, got transferred out there and it was eye-opening for the Rhode Island natives.

“We grew up very traditional,” Mary Ann said. But the healthier food options they saw in California “talked to us. It was like, oh, I like this!”

Mary Ann and Bob Hartman behind the counter at the store they built and ran for 38 years.

After two years, Bob was transferred back. Mary Ann, a middle school teacher, has left one teaching job to go to California and now left her California teaching position to return to Rhode Island. Suddenly, they wondered if  maybe Mary Ann shouldn’t try to land a third teaching job in three years. Instead, they could try to open something like they’d seen in California here in Rhode Island.

“We were living in West Warwick at the time, with Bob’s mom, and I started walking different streets looking for I wasn’t even sure, a storefront or something,” recalled Mary Ann. “I walked West Warwick, I walked Coventry. I didn’t know anything about East Greenwich. Then Bob said, why don’t you walk Main Street East Greenwich?”

Mary Ann found herself on Main Street in February. She stopped in at a cheese shop at 250 Main St. and got to talking with the owner.

A month later, they opened Back to Basics. It was trial and error at first, but then they found their groove.

“We started defining ourselves,” said Mary Ann. On the advice of a patron, Mary Ann bought a copy of “Laurel’s Kitchen,” a seminal vegetarian cookbook from the 1970s. “That was so instrumental to me because I didn’t know where to start.”

They started cooking classes in the store and carrying the items needed to make those recipes. They devoted perhaps 20 percent of floor space to a tiered table featuring all kinds of nuts and dried fruits.

“We were first, we were the pioneer in offering them fresh,” said Bob.

The Hartmans had their first child, Rob, a year after they opened. “He was pretty much brought up in the store,” said Mary Ann.

Bob was still working his “day” job, but in 1988, Bob left that job and took over at the store, while Mary Ann spent more time at home with their growing family (they had two more children, each three years apart).

They always listened to their customers, which led them to try different things. In the 1980s, they offered macrobiotic cooking classes. In the 1990s, they stocked more low-fat foods. And they started stocking a lot of vitamins. Then they noticed people coming in with food allergies.

In 1995, the Hartmans moved the business to 300 Main, but to a space next door to the store’s current home.

“That was kind of a leap of faith,” said Bob. It worked.

“We did a lot of juggling,” said Mary Ann. “We didn’t have daycare. I’d come in with the children when I could. And I’d do the cooking classes at night. I’d do what I could from home, but Bob was now the figure in the store. The years went by fast. By the time our third child went to kindergarten, I went back to the store.”

“As a general rule, we would try to leave the business here, go home and do family and community things,” said Bob.

Of course, when you have employees for decades, the way the Hartmans have, work becomes a bit like family too. Lori Frey has worked at Back to Basics since she was 15 years old – 35 years ago. Linda Lete has been with the store for 30 years and the “newcomer,” Deborah Marshall, has been there for 20 years.

“I think it speaks to the family atmosphere we’ve tried to keep in the store. We consider them part of the family,” Bob said.

The other part of that work family? The customers.

“We’ve been so involved in their lives. Even now when I’m here,” said Mary Ann, “I spend a lot of time listening to customers’ stories.”

They attribute part of their success to their location in East Greenwich.

You can still find the Hartmans at Back to Basics for a few more weeks, but you can also meet new owners Fran and Ron Shaver. 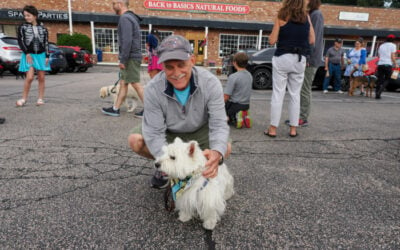 Above: Proud dog papa. Photo by Sandra Saunders.  The Dogs on Main Stroll last Thursday did not...