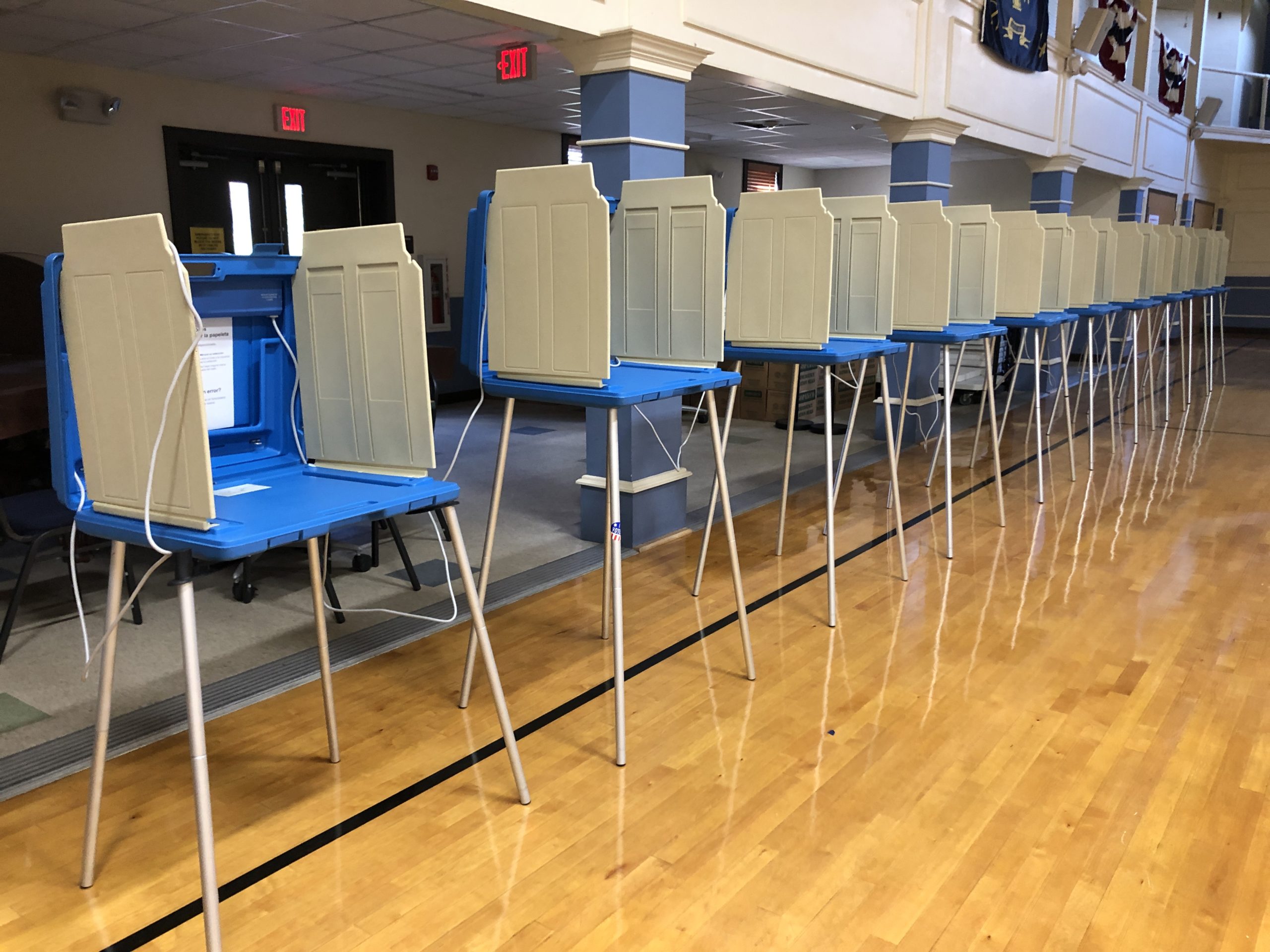 Above: Voting booths at Swift Community Center on Monday.

Election Day is finally here. Exhale. East Greenwich won’t see a big turnout Nov. 3 but that’s only because so many people have already voted. As of Monday evening, 3,127 people had cast early in-person ballots at Town Hall and 2,920 mail ballots had been received by the state, for a total of 6,047 votes so far.

That means, based on recent presidential election years, as many as three quarters of EG’s total votes have already been cast before Election Day even starts. (For context, in 2016, EG voters cast around 7,700 votes.) We’ve been hearing this from around the country, but it looks like even in little old East Greenwich, we are poised for a big turnout this year.

If you are among those who are voting on Election Day, there will be five polling stations open: Frenchtown School, EG High School, Hanaford Elementary, Cole Middle School, and Swift Community Center. If you are not sure where to go, click HERE. (If you have other questions, refer to the town website HERE.) To vote, you will need a valid ID and you are strongly encouraged to wear a face mask (those who don’t have a mask will be offered one). Polls open at 7 a.m. and close at 8 p.m. Spare a kind word or two for the poll workers – they are there for the whole time.

If you requested a mail ballot but then changed your mind, you will be able to cast a provisional ballot at Town Hall. Those ballots are checked first (to guard against double voting) before they are counted, so do not expect them to be counted Tuesday.

As for election returns, because everything is different this year, reporting out returns is too. The first results will be from Election Day voting machines. Expect those votes to be tallied by around 8:30 or 9 p.m. Then we all get to wait until 10 p.m., when cities and towns across the state will upload their early in-person ballots to the state. That will get us more than 50 percent there, but we will have to wait until 11 p.m., when the state will announce mail ballot returns (in EG, that’s more than 3,000 ballots). If everything follows the plan, most of the ballots will be tallied sometime after 11 p.m.

With an uncontested Town Council election (all five Democratic incumbents are running for re-election) and only three candidates for three seats on the School Committee since candidate Monica Mason has withdrawn, the real contests this year are House Dist. 30 and Senate Dist. 35. (In Senate Dist. 33, which comprises part of western EG, Lou Raptakis, a Democrat, is running for re-election unopposed.)

House Dist. 30 comprises all of East Greenwich and a small part of West Greenwich. The race for the seat pits incumbent Justine Caldwell (Dem.) against Anthony Giarrusso (Rep.). Both are EG residents. Two years ago, the race was flip-flopped and Caldwell went on to upset Giarrusso by a thin margin.

EG News will be reporting the results as we get them. If you are out and about Tuesday and have a photo or news tidbit to share, let us know! You can contact us at (401) 749-3115 or [email protected]