There are two bonds on the ballot on Tuesday, Nov. 5, a $5 million school bond (for a long list of school maintenance and security projects) and $4.5 million for wastewater treatment plant upgrades. There will be only one polling place: Swift Community Center.

The school bond, which would be paid off over 20 years, will be spent on security, health and safety, IT infrastructure and site projects, spread over all six schools. The high school gets the largest share (32 percent). Meadowbrook and Eldredge are in line to get the smallest amount (10 percent each). You can find the full list of projects here.

The decision to bond for capital expenses came as a result of both a state study that showed East Greenwich had $43 million of capital expense needs and a state bond approved last year that gives the state Dept. of Education money to support capital maintenance projects in every district. School facilities head Bob Wilmarth identified $5 million worth of projects of most pressing need.

In a conservative estimate, the state will reimburse 35 percent for projects planned for the $5 million bond that meet RIDE’s requirements. Reimbursement could go as high as 52 percent, depending on the project. There are a few items on the district’s list that would be eligible for no reimbursement at all, including new vehicles. But, school officials say, the majority of the projects would be eligible for RIDE reimbursement.

The list of proposed projects (find it here: Bond List ) is long and includes things like replacing bathroom original fixtures (i.e. toilets) at the high school and replacing ceiling tiles at Eldredge. There’s also a bucket of money for each school for security upgrades, the details of which are being kept confidential. 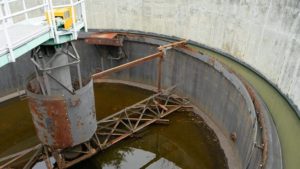 A ‘primary clarifier’ at the wastewater treatment plant that would be replaced with bond money.

School officials point out the new bond will be tax neutral, though not revenue neutral. It’s tax neutral  because debt from other town capital projects (the police station, capping of the old landfill) is starting to come off the books, giving EG a bit more debt service wiggle room.

Officials say it’s an excellent time to do it, noting that EGSD has been under-funding capital maintenance in recent lean years. The bond would help the district catch up. But RIDE is also dictating that districts build capital money into their operating budgets, or risk having their state aid be restricted to capital (right now, there are no restrictions on use).

School officials said the work would be done within a five-year time frame, with much of the work taking place over the summer months while most of the school buildings are not in use.

Here’s a video about the school bond. 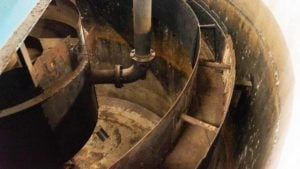 One of two gravity sludge thickeners planned for replacement if the bond passes.

The $4.5 million bond to replace aging or obsolete equipement at the sewage treatment plant, allowing the plant to continue to process waste water for the town and follow state regulations. The work would be done within about three years, according to public works director Joe Duarte. It would be paid off over 20 years.