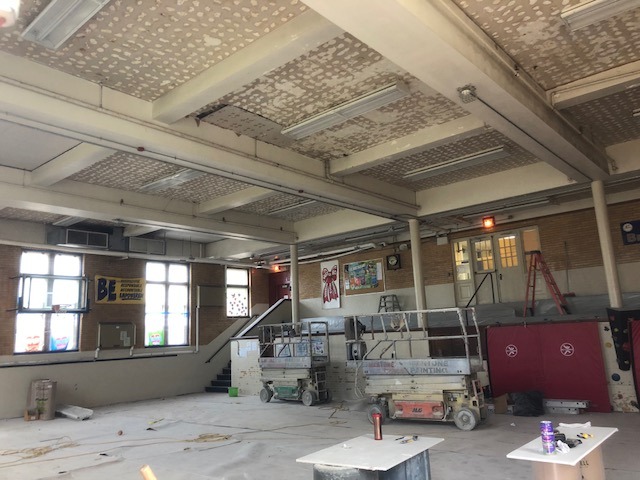 Repairs on the Eldredge Elementary School gym ceiling that partially collapsed in April are on track to be completed by the first day of school, Aug. 29, or the first week of September, Supt. Victor Mercurio told the School Committee last week. 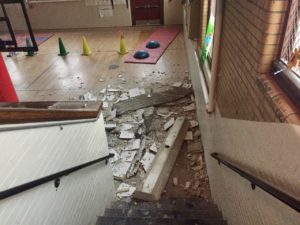 Debris left from the partial ceiling collapse at Eldredge Elementary School in April.

A section of plaster ceiling in the gymnasium at Eldredge Elementary School, including a light fixture, fell during a third grade gym class on April 10. No one was injured.

The school was closed for a complete inspection the following day, reopening on April 12 after the rest of the building was deemed sound.

The gym has been closed since the incident.

Mercurio said the work is being done by Martone Construction of Narragansett. Halliwell Engineering of East Providence did the day-after inspection of the entire school building and came up with the resolution.

However, the engineering firm did recommend “a subsequent precautionary measure, to give it another 15 years or so, that we go back and reinforce that structure as well.”

He said they would come up with a plan for how to address the rest of the building once the gym ceiling work was complete.

Mercurio also updated the committee on the Hanaford roof, which was replaced this summer.

“That project is complete,” he said. “On time and on budget, and no surprises.”