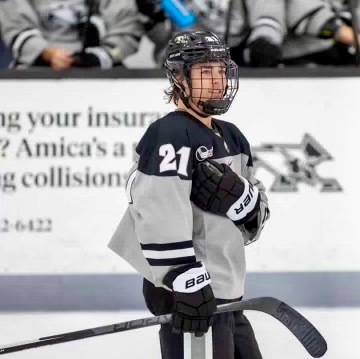 East Greenwich’s own Brett Berard is finding his groove at the collegiate level, winning the Hockey East Player of the Week award for the week of Nov. 21. The Providence College winger logged both a goal and an assist in each of back-to-back matchups against the Vermont Catamounts, including the game-winner in a 4-0 victory on Friday, Nov. 18.

“It meant a lot to me. It’s hard to get awards and recognition like that during the season, especially when the Hockey East is such a good league and any team can win on a nightly basis. For me I just try to play the way I can every game and hope the best for the team and luckily enough I was able to receive that award,” Berard said.

Brett attended school in East Greenwich all the way through his three years at Cole Middle School, before opting for Bishop Hendricken in his freshman year of high school. His brother Brady, who is a little over a year younger, was set to join him at Hendricken the following year. It was at this time that Brett received an opportunity he could not resist, an invitation to play with the United States under-17 developmental team. He verbally committed to play for Providence College at just the age of 15. This year, Brady joined the Friars as a freshman, allowing the brothers to play on the same team for the first time in their lives. David Berard, the boys’ father, became the associate athletic director for both men’s and women’s hockey at Providence College in May of last year. He had previously been the head coach at Holy Cross from 2014 to 2021.

Brett Berard, in his junior year with the Friars, currently leads the team in points with 15, scoring 6 goals and assisting 9 thus far. He is looking to achieve this impressive feat for the second straight season, he topped the team with 38 points in 2021 as well. The Hockey East conference standout was drafted by the NHL’s New York Rangers in 2020 in the fifth round, via pick number 134 in the 2020 draft.

Berard described the feeling of being drafted into the world’s premier hockey league, “It was a surreal feeling that I don’t know if I can even find the words to explain how I felt. Obviously it stunk not being there live at the draft because of COVID-19 but being at home with my mom and dad and seeing my name pop up on the TV was amazing.”

Providence College hold the #10 spot in the NCAA top-20 rankings, sporting a 9-3-5 record. November’s slate of games saw the Friars make an impressive run, winning five of their eight games, and losing just once in regulation. They have their eyes on a potential national championship run down the line, but the team knows that there is a long way to go before they reach that point of the season.

“I think we got really lucky this year with how well our team has jelled together so far. We have a pretty old group so it was easy for us to make the freshmen and younger guys feel welcomed so quickly which I think has translated to on the ice,” Berard reflected. “A big thing with our team is how we have guys that will do the little things and know their role which allows us to play together as a team, and also builds trust amongst all of us. When we work hard and play physical is when we are at our best so if we keep that identity we will have success.”

Although he still has the rest of his college career ahead of him, Berard knows that the future could hold some incredible opportunities. His main goal remains the same as most of the other players around him within the college hockey world, to play at the highest level, and on the biggest stage.

“The biggest dream for me is to play in the NHL. It has always been a dream of mine to reach the highest level and although there’s still work to do it’s something that I strive for every game and every practice.”

Brett Berard and the Providence Friars will look to continue their successful season on Saturday, December 10th, when they match up with Merrimack in the last game before the three-week holiday break.