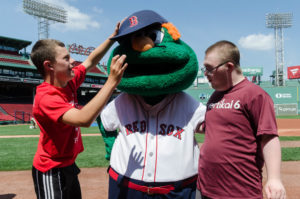 Sadly, the Red Sox season is over, but for a bunch of kids from the East Greenwich Little League Challenger baseball team, 2017 will always be a special year. That’s because it’s the year they got to take some swings at home plate at Fenway Park.

It started when team coach Howard Faunce learned that CVS and the Red Sox offer a program for Challenger teams. The Little League Challenger Division was created so young people with physical and/or developmental disabilities could play baseball with the help of peer buddies. John Sullivan got EGLL to add a Challenger team in East Greenwich in 2014. Faunce sent in a letter outlining the program and saying the team would love to participate. That’s all it took. They contacted Faunce and said, Come to Fenway. Here’s where I need to make a confession: My son James is an EGLL Challenger athlete. When we heard about the Fenway opportunity, I figured we would be one of many teams at the park that day. Instead, it turns out we were the only team. First the athletes did a little batting practice inside. I figured, well, that’s it. Nope. Then they took everyone out to the field, athletes, buddies and awed parents alike. The kids sat in the dugout, then everyone checked out the Green Monster and then it was time for on-field batting practice. One by one, the athletes were guided to home plate for a chance to swing at a few pitches. Afterwards, it was time for lunch in the dugout where the Red Sox would be hanging out just a few hours later. Following lunch, there was a tour of Fenway.

Everyone got tickets to the game that night (8/16) – Red Sox versus Cardinals (a sweet game, ending with Mookie Betts’s walk-off home run in the 9th) – and included early admission to catch the Red Sox batting practice.  It was an 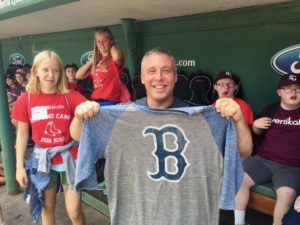 Challenger coach Howard Faunce with the Red Sox shirt given to him by the team.

“It means everything to see the smiles, the opportunity for these great kids, the buddies and the athletes, to be here for this,” said Faunce. “It’s an amazing fulfilling experience for me. The best part of it for me is just watching the kids play together.” 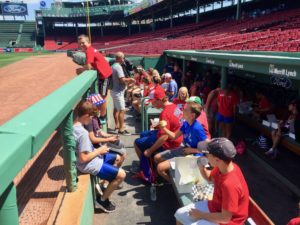 Lunch in the Red Sox dugout. 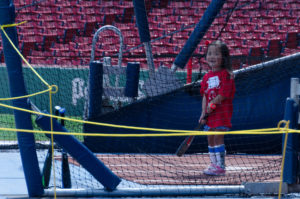 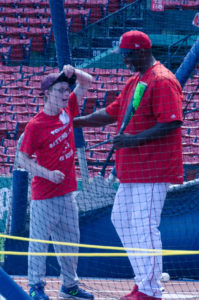 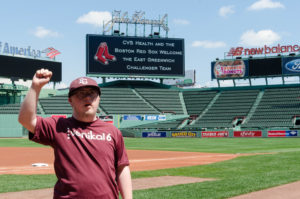