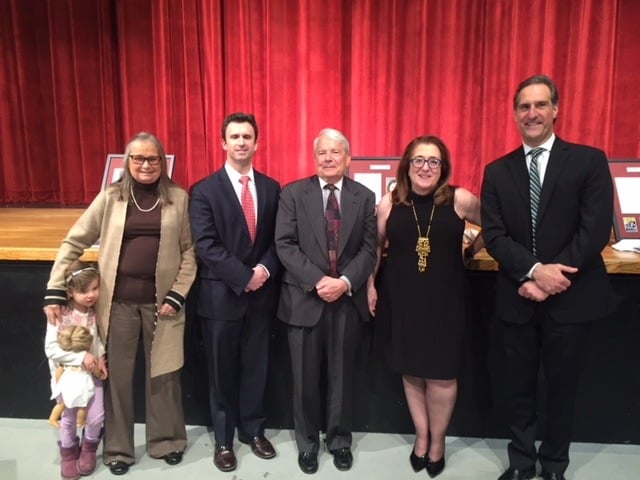 From left, Diane McDonald (with a granddaughter), Matt Plain, John Chandler, Bernice Pescosolido, and Guy Asadorian – the 2018 inductees of the EGHS Wall of Honor.

EGHS Wall of Honor inductee Bernice Pescosolido had to leave East Greenwich before she could understand the its power.

“The most important thing that EG High School and the Town of East Greenwich and – I have to say – the state of Rhode Island provides for people … is a sense of community and a sense of belonging,” said Pescosolido.

“I’m so proud to be from East Greenwich because we really were this working class community,” she said. “I had no idea that what we were was so special and so different. I’ve come to understand and believe that.”

Pescosolido graduated from the high school in 1970 and is a distinguished professor of sociology at Indiana University. (You can read more about Pescosolido and the other four inductees here.)

John Chandler, Class of 1966, lived in East Greenwich a mere five years. He spent four of them at EGHS and it made its mark. He made his mark too, serving as class president for two years, among other distinctions.

Chandler, who had an illustrious career in information technology, almost didn’t finish high school in East Greenwich. His family, after moving to EG from California before his 8th grade year, moved to Oklahoma the summer before his senior year.

He ended up staying with the Forscht family for that final year of high school.

Chandler’s life has been elsewhere ever since 1966 but Chandler’s love of EGHS came through loud and clear Wednesday.

“I feel like I’ve come  home,” he said before launching into his prepared remarks.

“I’ve been the fortunate beneficiary of an enormous amount of support from this community and love from my family for my entire life,” said Matt Plain, the youngest of the night’s honorees. He graduated in 1994.

Plain, a member of the EG School Committee, made his love of the EG schools clear, recalling all those who taught or guided him in elementary school, including the school custodian.

“Who could forget Bobby Taylor, keeping our school clean and safe for everybody to enjoy,” Plain said.

Plain started out as a teacher himself. A lawyer now, he continues to work on education issues.

Diane McDonald spoke about how she got to live out her childhood dream, riding horses and then owning her own stable (Dapper Dan). For McDonald, the daughter of teachers (her father, Norman Monks, taught and coached in East Greenwich for decades), being a horsewoman was not a given. But it was something she always wanted to do, she said.

If she could tell young people anything, she said, it would be to “follow your passion. Don’t settle for a job that’s just a job.”

“It’s that whole deep sense of community that, really, gave me the foundation to try and be successful as an adult,” he said. Asadorian works in financial services.

“I’ve done a lot of volunteer work in this town and I’m 100 percent certain that it’s that connection that I have to the community that’s really motivated me to want to give back.”

There was a sixth person honored Wednesday night, if not officially. That was Dominic Iannazzi, who died in 2017. Iannazzi was a teacher, school administrator and coach in East Greenwich from the 1950s into the late 1970s. He wanted no fanfare upon his death but Wall of Honor organizer Bruce Mastracchio recounted a couple Iannazzi stories and that seemed to prompt others.

John Chandler said before he was able to find a permanent home for his senior year (his family had moved out of state), Iannazzi actually took him in for six weeks.

Bernice Pescosolido recounted how she’d tried hard to stay off Iannazzi’s radar since her brothers were definitely ON his radar.

“I just thought if Mr. Iannazzi knew my name I would automatically be given detention,” she said.

Diane McDonald DID get detention.

She’d asked if she could take a day off school to compete in a horse show. Iannazzi said no, but she went anyway. When McDonald turned up at school the next day with a note, Iannazzi held up the newspaper announcing that she’d won a trophy at the horse show. He gave her two days detention.

If you know of someone from EGHS you think should be put on the Wall of Honor, contact Bruce Mastracchio at thebrooker23@yahoo.com.

East Greenwich News is reader supported. If you like what you’re reading, please consider making a donation. Click on the link below. Thanks!