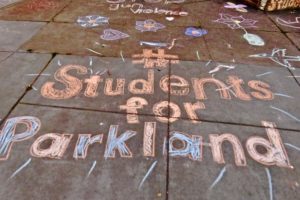 ‘If we do nothing, this will continue – not necessarily to us but to students across the country.’

East Greenwich, R.I. – To be a high school student in 2018 is to contemplate the idea that someone might come into your school to hurt people. After the shooting Feb. 14 that left 17 dead and scores wounded at Marjory Stoneman Douglas High School in Parkland, Florida, students there decided it was time to do something. That activism has spread nationwide, including to some students at East Greenwich High School who have organized a “walkout” Wednesday morning to honor those injured and killed and to encourage students to become politically active.

The organizers got permission from school Principal Michael Podraza but he would not allow them to leave the school, citing safety concerns. Instead, the plan had been for the students to walk out to the interior courtyard. Because of Tuesday’s snow, however, that has been scrapped. The students will now conduct their walkout activities in the auditorium.

Freshman Miguel Figueroa saw the walkout as a perfect opportunity to raise awareness at the high school.

“This is not a political, partisan thing. This is about the lives and the health and safety of students,” he said. “If we do nothing, this will continue – not necessarily to us but to students across the country. That’s why we’re doing this.”

“I would call myself a victim of desensitization to school shootings,” he said. “It’s never really struck me until Parkland.”

Petteruti is in favor of some gun control measures – banning “bump stocks,” raising the age to 21 to buy long guns – but he also belongs to a gun range and believes in the right of mentally healthy people to be able to own guns.

“Mental health is an issue that needs to be tackled,” said Petteruti.

“We’re not just trying to make a message and walk out of class,” said organizer Abby White, a junior. During the event, “we’ll be giving students links to register to vote and to write their opinions and email Congress. A lot of kids have strong opinions about what action should be taken.”

She said the hope was to get kids to stay politically active, whatever they believe.

“We really need to follow through and fight for what we believe in,” said White.

The walkout is optional. Sophomore Andre Gianfrocco said he plans to attend.

“Everyone has the same feeling about Parkland. It was a messed up thing. I definitely feel like they are honoring the people of Parkland,” he said, but added, “people could be putting more energy in actually securing schools more.”

Gianfrocco said he’s had a plan about what he would do if a shooter came into his school since he was in elementary school.

“I would hop out a window and run,” he said.

Junior Zing Gee will be on a field trip on Wednesday but he said he wouldn’t participate even if he was at school.

“I think school shootings are heart-breaking, horrific events that nobody should have to go through,” Zing said via email. “I wouldn’t walk out because I simply don’t agree with all of the reasons behind the walkout. Personally, I support the Second Amendment and while I agree that certain legislation such as that banning bump stocks is reasonable, I don’t support banning semi-automatic rifles, which is something many people have been calling for.”

He added, “I think increased school security can help. I also support it when news outlets don’t publish the name or photos of people who commit school shootings because these people shouldn’t be given publicity or notoriety.”

Freshman Emmy Nutting would fall into the category of wanting to ban certain weapons. If the decision was hers, she said, she would get rid of guns but she knows there’s great resistance to that. She will be taking part in the walkout.

“I’m very glad the protests are going on,” she said. “If a shooting happened, if someone I cared about got killed … if there had been any way i could have prevented it, that would weigh heavily. I’m hoping something will change. When people look back in history, I don’t want to be part of that group that just sat there. Things don’t change if people don’t act.”

The walkout is restricted to students only. Students and adults are invited to “A Call to Action” Wednesday night from 7 to 8:30 p.m. at the First Lutheran Church, 118 Division St. Speakers will include representatives from Moms Demand Action, the Rhode Island Coalition Against Gun Violence, among others. The evening is hosted by EGHS Civic Action.