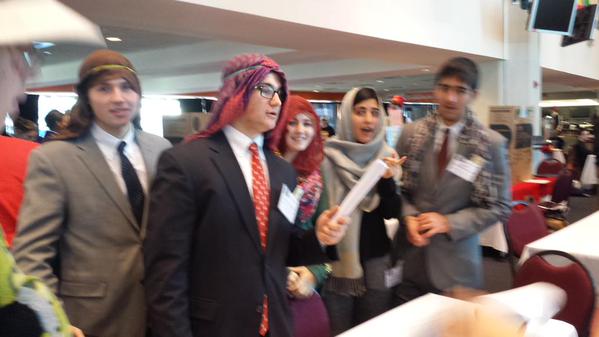 Team Bangladesh during the competition.

Bangladesh, Australia, Turkey, India, Algeria – these are faraway places and most of them are very different from the U.S., much less East Greenwich. But, last week, 28 EGHS students got a little taste of what it would be like as a leader of one of those countries, when they participated in an “International Economic Summit,” with hundreds of other high school students, at Gillette Stadium in Foxborough, Mass.

This was a first for the school, and the first year any Rhode Island schools competed. If performance is any guide, it won’t be their last.

The EGHS students were divided into five “country” teams listed above. Team Bangladesh tied for first place overall with a team from Boston Latin. That team also came in first in its category (low-GDP) and first in the debate/proposal forum. Team Turkey placed first in the mid-GDP category.

“We were invited to as the first Rhode Island high school to be part of this international economic summit,” said business teacher Patricia Page, who with social studies teacher Timothy McPartlin, helped prepare the students. “It is quite an undertaking.”

They chose students who’d taken personal finance and economics, because the goal of the summit is to raise the standard of living in your “country.” They didn’t have a lot of prep time. Page said they only found out they were participating in November, but students started meeting weekly.

“The goal is to raise the standard of living and succeed financially by using their skills in economics, finance, marketing, negotiating and creativity,” said Page. “It was an intense daylong event that had EGHS students taking on leadership roles.”

It was on-the-job training in macroeconomics.

“The day started out with us grouping into trade alliances,” explained Ryan Marshall, from Team Australia. “We took geography quizzes, personal finance and macroeconomic quizzes and there was a trading part. we went around go around to other countries to try to fill out of our trading goals.”

The countries were grouped into one of three economic classifications: low, middle and high GDP. Australia was a high-income country, with lots to trade, but also needing a lot of things. The lowest income countries, on the other hand, had less to trade but needed less, said Marshall.

“You had to go to other people and convince them that it was in their interest to trade with you,” said Max Gessman of Team Bangladesh. “It was really fun interacting with all these different people.”

He said their team did so well because things ligned , “One thing we were able to do is find a very strong alliance [with other ‘countries’] that met all our needs, so we quickly got all our import and export goals completed. After that, we invested in long-term investment projects.”

“I’m planning on studying business so I really liked the sales part of it,” said Paul Surabian of Team India. “We strategized on which countries to sell to.”

Some Massachusetts teams did not show up because the cold weather had caused some districts to cancel school for the day.

“That really forced us to think on our feet,” said Jon Colavita from Team Turkey. “It forced us to rethink our strategy.”

Zach Johnson, also with Team Turkey, said he learned a lot about negotiating – in particular, that the way it happens in movies and on TV might not be the most effective.

“Saying, ‘I won’t accept anything less!’ didn’t work,” he said. “People got defensive and didn’t want to trade.”

Being friendly and working with the people you were trying to trade with worked a lot better, Johnson said.

“This was an embedded education experience,” said Page. “They had to adapt to an evolving situation in real time.”

While Page said she’d love for students to be able to attend next year, that depends on finding a sponsor.

“This type of education experience that is truly invaluable,” said Page, “so we will have to get creative.”

Find a Storify of the day’s events here. And here are the students and their teams: