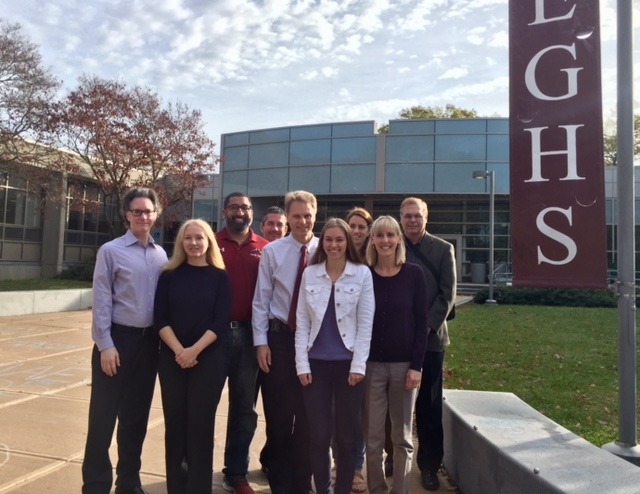 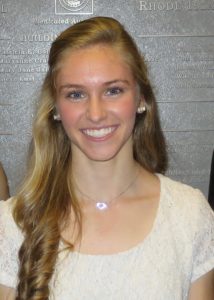 EGHS senior Laura Murphy has collected awards through her young life the way others collect sea shells. She has a new one for her collection – after being chosen as Rhode Island’s Wendy’s High School Heisman winner in October, Murphy learned Friday that she is one of five female national finalists in that elite competition. While Murphy is a strong track  athlete, the high school Heisman competition requires excellence in all areas – athletics, academics, and community service. Laura is a top student, an All State soprano and has won art and writing awards too numerous to recount here, but she also drafted a bill with state Rep. Anthony Giarrusso to make EGHS a Heart-Safe school.

A year ago, Laura’s prospects didn’t look so rosy. A virus rendered Laura Murphy’s left vocal cord paralyzed, which can sometimes be caused by a tumor. Extensive tests ruled out any tumors but the cord paralysis left her with a whisper of a voice that doctors were unsure would ever return.

Throughout the ordeal, Laura ran, wrote poetry and drew, activities that helped her cope. She’d torn her hamstring the year before and had to sit out the indoor track season as well as half of the outdoor season, so Laura had learned patience. But the possibility she would never be able to sing again was tough.

“That was the first time she was really sad,” said Laura’s mom, Margie Murphy.

Then, after a bad cold in December, Laura’s voice seemed to strengthen. She returned to the doctors. This time, instead of the flat line doctors saw when they looked at her vocal cord in three months earlier, there was movement. Her vocal cord was coming back.

Laura’s voice did return and she was even able to sing in the high school’s talent show last March.

“You don’t know when you’re facing those obstacles that it will turn out all right,” Laura said after school officials, coaches and family members surprised her in the middle of Mr. Brocato’s Creative Writing class Friday morning. “The fact that it’s turned out this way would seem unimaginable.”

Murphy started running only after her EGSA soccer coach, Stephanie Gloria, noticed how fast she ran and suggested she try track. Her mom took her to a track practice at North Kingstown High School and the then-10-year-old said, “Oh, the track’s orange!” her mom recalled Friday. But Murphy didn’t stay a novice long. She ended up qualifying that year for the national youth Hershey Track & Field meet where she met track giants like Carl Lewis. She was hooked after that and returned to Hershey three more years. 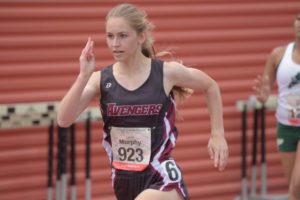 “Laura is a quiet leader. She’s all about the team and kids follow her,” Thomas said Friday. “You see how hard she works in the classroom, in all her 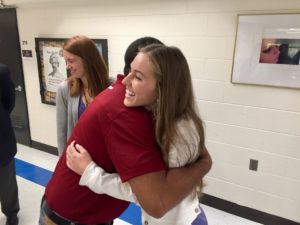 other activities and in track. She’s fun to coach because she’s good at everything and she’ll try, even if it doesn’t work. She keeps plugging away.”

Remarkably, this is the second time in four years that an EGHS student has been named a Wendy’s High School Heisman finalist. in 2013, it was Andrew Miner, star quarterback, top student, accomplished writer and musician. Miner went on to win the whole thing – the first Rhode Islander to achieve that. Now in his senior year at Harvard, Miner sent a video message to Laura, congratulating her.

Laura and the other finalists will travel to New York City for the Wendy’s Heisman Banquet in December, where the actual college football Heisman winner will be announced along with the boy and girl high school Heisman winners. As a national finalist, Laura will receive a $5,000 college scholarship and a $100 Wendy’s gift card.

Right after Principal Michael Podraza announced that Murphy was a national finalist, he asked if she wanted to say anything.

“Obviously, I couldn’t have gotten to where I am now without the support of all of you, every single one has played such a crucial role,” she said looking around the room. “I can’t thank you enough.”