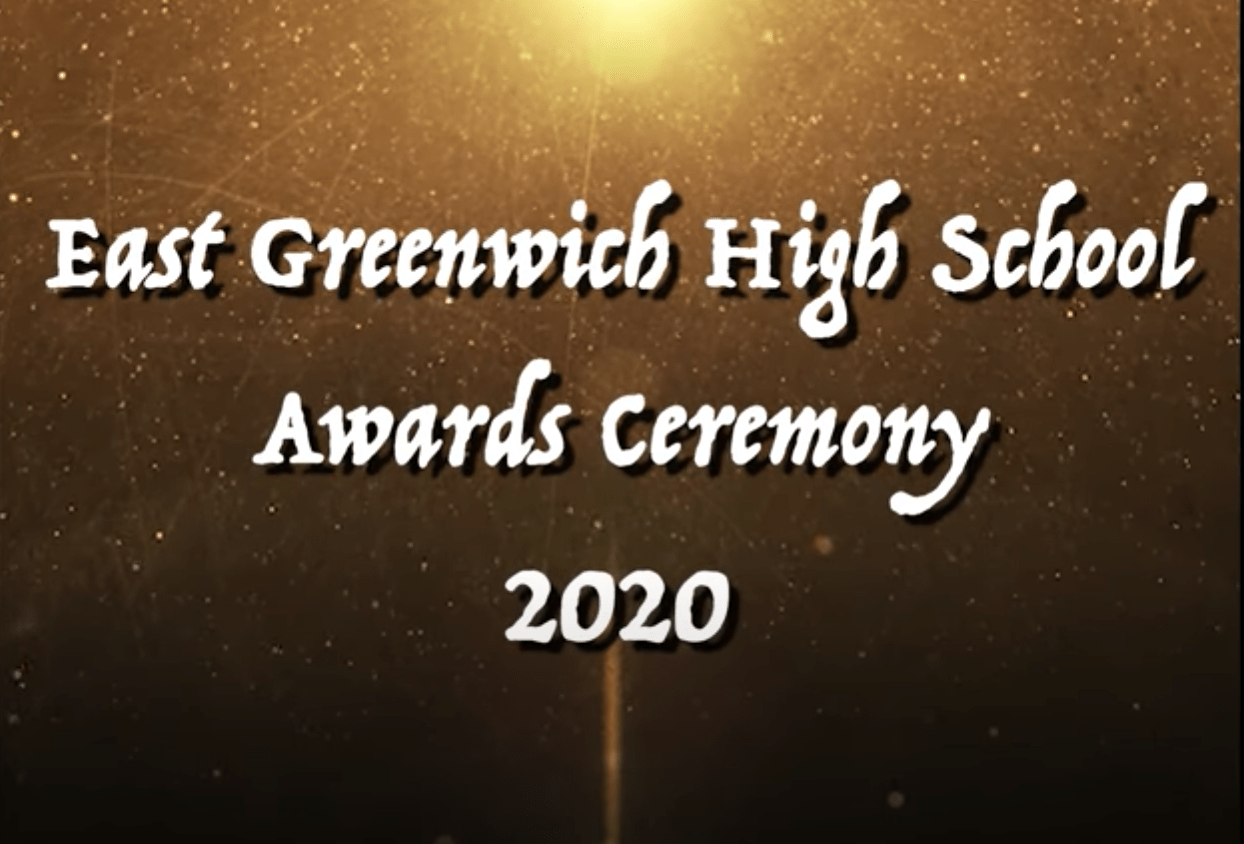 Despite the pandemic, East Greenwich High School has found yet another way to honor the Class of 2020– this time through a YouTube premiere, coordinated by Dr. Heath, teachers, and community members. In the hour-long video, awards were distributed to members of both the junior and senior class.

Beginning with the book awards, several juniors and one senior were recognized for their academic, extracurricular, and community-minded efforts. Madeline Curnow kicked off the sequence by winning the Brandeis University book award, followed shortly by Liam Scott for Bryant and Olivia Nippe-Jenkins for George Washington. Jessica Caterson then took the Harvard University book award – an award that her sister also won in years prior. Holland Lopez then won the University of Rhode Island award, Rebecca Xu took the University of Virginia Club Jefferson one, and Sophia Patti rounded it out with the Yale University award.

In the Music Department, both Sam Delong and Elizabeth Stitt were recognized for their efforts in band and orchestra. Eva Bianco and Tyler Caroppoli were recognized by the English Department. Jordan Kalinsky won the Pell Medal in history, and Chris Teng took home the Mario Regini Social Studies award.

The World Language Department recognized Jordan Kalinsky as the Junior Ambassador for World Languages, and then singled out Sophie Johnson, Claudia Smith, and Jack Holmgren for their efforts in French, Latin, and Spanish, respectively. The Math

Department also took care to recognize multiple seniors, selecting Suraj Sait* for the Department Award. Andrew Babb was also recognized for excellence in computer science, and Morgan Prior was recognized for her efforts in both fields.

The Health and Business Departments also chimed in to wrap up the Departmental Awards. Mr. Downey selected Justin Chen and Sabrina Neimark as the recipients, and Mrs. Page took chose Jack Gecawich for the General Treasurer’s Leadership Award and Morgan Prior for the Financial Capability Award.

Of course, no ceremony is complete without Mr. Petrucci, who immediately took to announcing the Theater Awards. The Jim Metcalf Drama Award went to Noelle Salisbury and Jack Larson, while the Rhode Island Youth Theater Award went to Lily Mollicone. Also, Rylie Paull, Joe Kulik, and Alexandra Russo took home the Mike Hyde Tech Awards, while Caleb Gupta also received the Pit Orchestra Award. Not to mention both Matthew Tactacan and Catherine Zarrella, who both took home the Avenger Spotlight on Talent Awards.

Following those announcements, Mr. Heath announced Suraj Sait had been named a U.S. Presidential Scholar Semi-Finalist (1 of 621 in the nation), and also announced the Principal’s Awards for Academic Excellence, to Sait as valedictorian and Brant Wei as salutatorian.

Congrats to all awardees! The entire ceremony can be seen below: