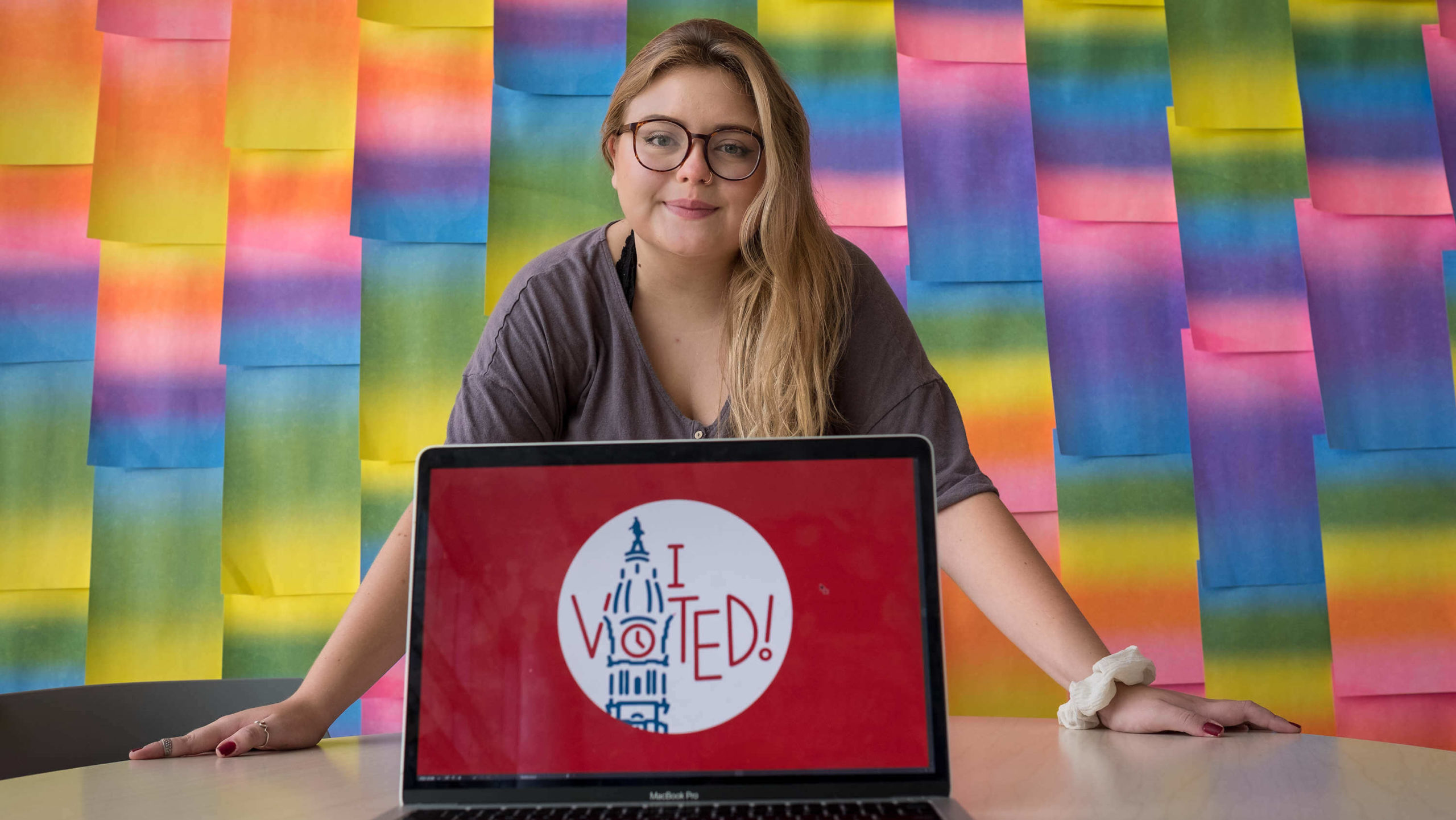 After turning in their ballots, people around the nation will be receiving “I Voted” stickers on Election Day this year. However, the people of Philadelphia won’t be given the standard, oval shaped sticker with the American flag and Times New Roman lettering. The City of Brotherly Love’s design depicts the iconic Philadelphia City Hall with the “O” of  “I Voted” cleverly hidden as the circle of the clock. The sticker as a whole has a playful quality with doodle style lettering and light colors. The mastermind behind the design is Katie Fish, who won a competition for the new sticker in March and just happens to hail from East Greenwich.

Philadelphia’s I Voted Sticker for 2020, designed by EG’s Katie Fish!

Although her art will be shining on Philly’s streets this November, Fish’s art education did not begin there, but rather right here in EG. At East Greenwich High School (Class of 2017), her love of art grew as she tried out the different classes the art department has to offer. Never one to be afraid of experimenting with new mediums of art, Fish tried out printmaking, sketching, painting, and ceramics. Ironically, she had her doubts during high school about electronic mediums of art, specifically her now major, graphic design.

“I knew I wanted to do some form of art,” she said, “Up until senior year, I was really scared of digital mediums because I didn’t know how to do anything on the computer. I was like, ‘I’m gonna do fine art, draw, and paint, and that’s gonna be it,’ but then Mrs. Agresti kinda got me into digital art.”

Specifically, it was Deanna Agresti’s class, Introduction to Adobe Illustrator. The class taught her about Adobe programs that Fish still uses in college today.

When she entered Temple University in Philadelphia, Fish had to take classes on various types of art, including sculpture, woodshop, and printmaking. Graphic design was once again a class on her schedule and she ended up declaring it as her major. In hindsight, this makes a lot of sense to her.

“I’ve been kinda designing my whole life without knowing what graphic design was,” noted Fish, “When I went to Eldredge, I would design the talent show pamphlet covers. In middle school, Mrs. O’Neil had us make an article pretending like we were writing for our textbook. So I went into Microsoft Word and I made it look like the layout of our textbook. I didn’t know I was doing it then but I’ve been doing it forever.”

In addition to projects through elementary school and middle school, she also participated in many art events and competitions in high school. Like working with Mrs. Agresti to create SnapChat filters for the school’s annual Ivy Day, printmaking in Mrs. Roger’s class, and designing talent show brochures for Mrs. Champagne, all helped her to prepare for the hands-on college classes to come.

In her junior year at Temple, Fish took a class called Hatchery. The goal of the class is to give students the opportunity to design for real-world projects and work with clients. At the beginning of the semester, students were assigned a “warm-up project” of designing an “I Voted” sticker for the City of Philadelphia. The winning design of the competition, which was voted on by average citizens of the city, would be used in the upcoming election. The project was a bit of a time crunch, giving students only two weeks to create their design and submit it.

“I start out with a few sketches on Procreate. Then I bring them into the class since critique is such a huge part of anything in design,” Fish explained, “The whole class will critique it and the professor will critique it and then you will kinda settle on two or three that you want to move forward with. That’s when I bring it into [Adobe] Illustrator and trace over my design there, do another critique, and finish up the final details before you’re all done.”

Though the method Fish used to create her sticker can be taught in class, finding the inspiration can be a lot trickier. It just so happened the weekend the project was assigned coincided with a visit from her parents. While they were there, they walked all around the city and did all the “touristy” things the city had to offer. The weekend of fun with her parents provided the inspiration she needed for her final design.

After entering the sticker into the competition Fish was shocked to learn she was a finalist for the competition. In the end, she had received 18.48 percent of the vote out of nine finalists, winning the first place spot.

“I didn’t win anything physical, but it’s a huge statement for my career and my resume,” she said.

Come Election Day, Fish said it will probably feel “surreal” seeing people wearing her design. “I’ve done freelance work before but never anything to this scale,” she said. “It’s such an honor to be a part of the election process.”

Fish is in her senior year at Temple. After she graduates in this upcoming year, she hopes to stay in Philadelphia and pursue a career at a design firm.