EGHS Gets Its Spirit On With Bonfire, Cornhole Tourney 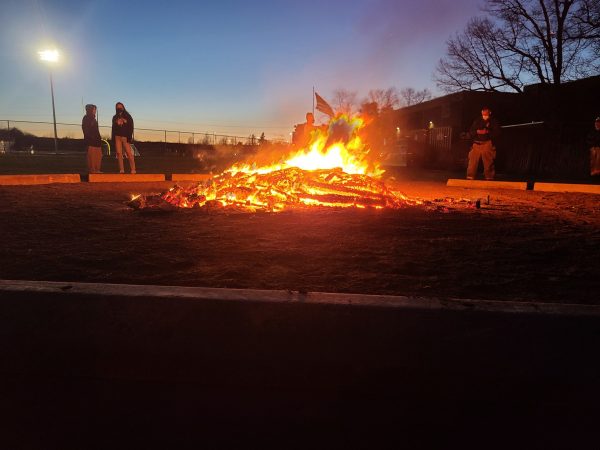 East Greenwich High School held its first-ever cornhole tournament and bonfire earlier this month as part of homecoming festivities pushed to the spring because of COVID-19 restrictions last fall. It was an attempt to foster the school spirit that typically surrounds the week of homecoming on the evening before the homecoming football game and included food trucks as well.

The bonfire was lit in a freshly dug fire pit in a field next to Carcieri stadium, using wooden pallets donated by members of the community. EGFD firefighters, Principal Ken Hopkins, and Vice Principal Johnathan Mendelson kept a close eye on the bonfire, with students at a safe distance experiencing the warm glow.

The cornhole tournament took place on the football field with 20 teams of 2 students a piece. Each team brought their own cornhole board and thanks to the nature of the game, partners were easily able to maintain a distance of 6 feet from their opponents during the match. The winners were juniors Emma Bernett-Testa and Christian Stange.

Stange and Bernett-Testa had been cornhole opponents over the summer and decided to be a team because they were matched in their capabilities.

“I think I’m pretty good but I didn’t expect to win the entire thing,” said Bernett-Testa. “It was honestly surprising. My dad is definitely better than me but I’m second best.”

The duo hopes to play again next year and take on some new opponents.

Additionally, two food trucks – Baby BoneTown BBQ and Poppy’s Waffles – were parked nearby with the scent of fried dough and barbeque sauce within smelling distance from the main festivities. The event also included speeches from the football team and their coach, John George. The girl’s volleyball team, whose season was also moved to the spring due to the pandemic, was also honored that night. Cheers from the volleyball match against Cranston East taking place in the high school gymnasium could be heard from outside.

With the prospect of students returning to full in-person school after April break, the bonfire and cornhole tourney were just one of the events the school is planning this spring. The Avenger theater club just concluded a musical retrospective of the last several years of EGHS musicals, and coming up are the annual talent show, Airband, and Senior Week activities.