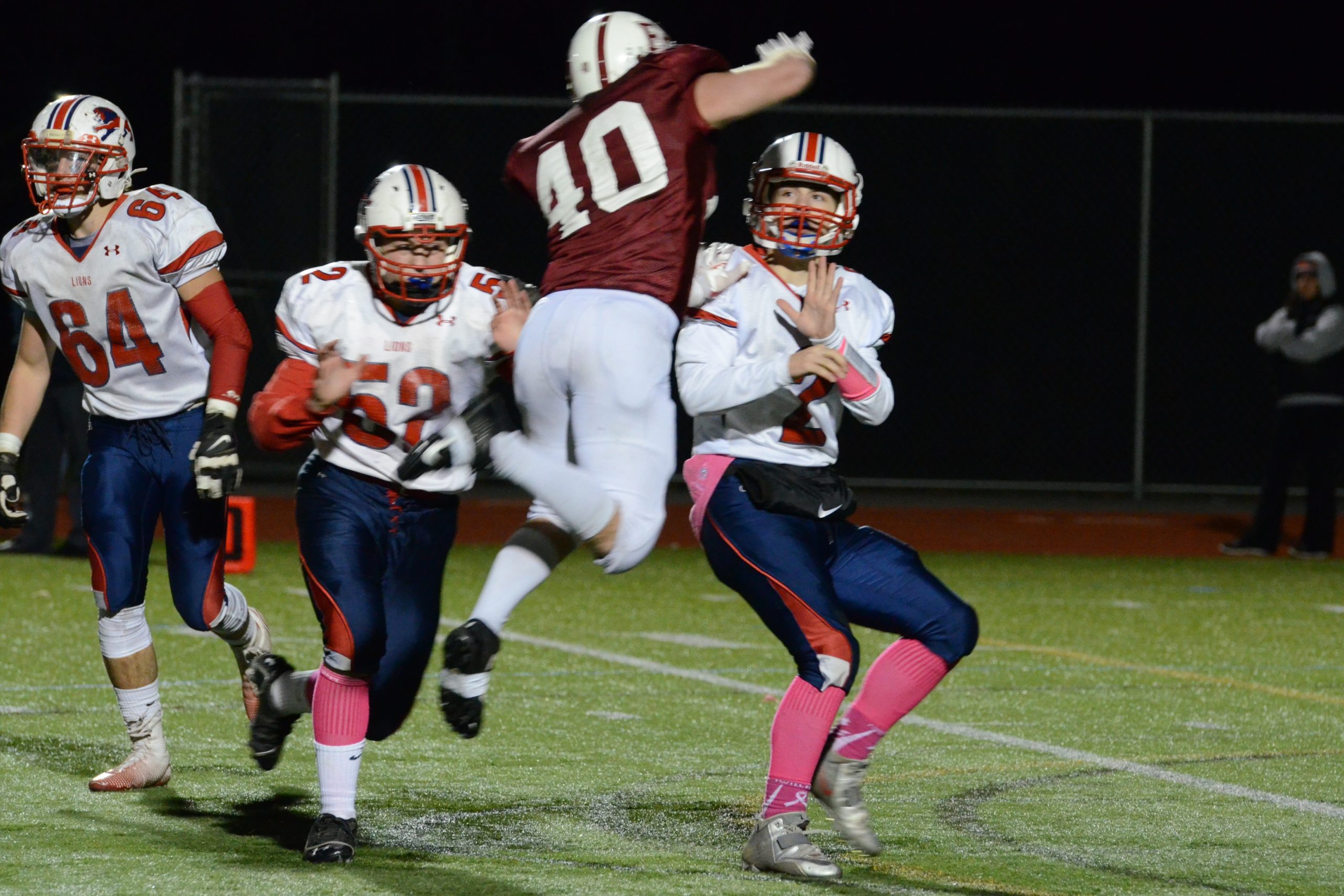 The East Greenwich High School football team solidified their playoff hopes by beating the Lincoln High School Lions 26-12 at Carcieri Field on Friday night. The Avengers capitalized on two Lincoln turnovers in the second quarter to take a commanding lead and never looked back.  Senior Dillan White had two touchdowns for East Greenwich.

After a scoreless first quarter in which neither team could get their offenses established, the Avengers took control early in the second quarter with a sustained drive capped off by an 18-yard strike from junior quarterback Nick Andreozzi to his classmate Egan Reale, who was seeing his first game action in three weeks because of injury.  The drive included a 29-yard pass from Andreozzi to senior Quin Sullivan, two 10-yard completions to Reale and a 15 yard face mask before the touchdown throw. Owen Hains kicked the extra point to make the score 7-0.

Hayden Margolis, a junior, recovered a fumble on the ensuing kickoff to provide East Greenwich great field position. The drive appeared to stall after a 13-yard connection from Andreozzi to Sullivan but the quarterback converted on a 4th and 15, running the ball 38 yards for the touchdown. After a failed extra point the Avenger lead had expanded to 13-0.

During the Lions’ following drive, junior Brian Gemma intercepted his sixth pass of the season and the East Greenwich offense was on the move again with 4:30 left in the first half. Although the drive almost stalled, Andreozzi hit Sullivan again on 3rd and four for a 15-yard gain to keep the it moving and then threw a strike to Reale for a 19-yard gain to the Lions 16 yard line. Dillan White capped off the drive with a strong second effort from the two yard line. Hainse hit the extra point to make it 20-0 at halftime.

Neither side could do much at the beginning of the third quarter and the play became ragged on both sides of the ball. Lincoln switched to a wildcat formation to get the ball in the hands of running back Nathan Fay, who was the bright spot for the Lions all night. They could not, however, get the ball deep into Avenger territory. East Greenwich completed their scoring on a sustained drive that ended with White bulling his way into the end zone from the one yard line with an assist/push from the offensive line.  That drive featured a 23-yard pass to Sullivan and a 14 yard pass to Hayden Margolis.

AJ Turchetta advocates for the Avengers with an official.

In the fourth quarter, Lincoln tried to make it interesting by intercepting a pass at their own goal line and returning it for a touchdown. The Lions then recovered their onside kick with less than three minutes remaining in the game and moved the ball down field with Nathan Fay scampering for the touchdown with no time left on the clock to make the final margin 26-12.

The Avengers, now 4-1 in the division travel to Providence for a noon game against Hope next Saturday. They then return home Nov. 7 for Senior Night against Ponaganset. Good seats are still available.