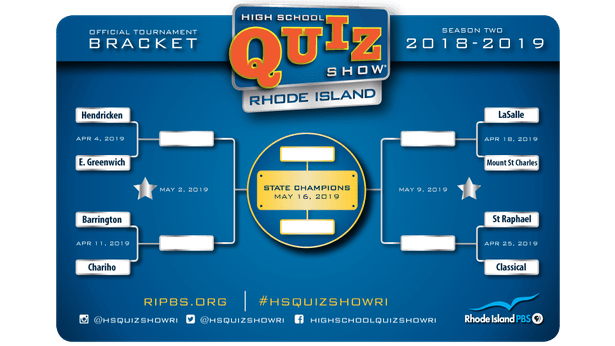 Teams from eight Rhode Island schools qualified for this year’s Quiz Show. In addition to EGHS and Hendricken, the teams are Barrington, Chariho, La Salle, Mount St. Charles, St. Raphael, and Classical. Barrington was last year’s champion, beating Hendricken in the final round. East Greenwich did not compete.

This year, Principal Michael Podraza asked if any teachers would be interested in getting a team together for the quiz show. Latin teacher Ben Revkin decided to ask the Academic Decathlon team, which he advises.

“There were no criteria for who can be on the team. We took it as an opportunity to try something new and get mentally prepared for our main event, Acadeca,” said Revkin. (The EGHS Acadeca team went on to place second last month.)

The quiz team team is made up of four students with one alternate: Brant Wei, Kavana Girish, Laurel Koehler, and Ana Karabots, with Talin Calikyan as the alternate.

“Unlike Acadeca, there are no study materials and the topics are random. It is similar to pub trivia or Jeopardy, and is televised,” said Revkin.

The shows were filmed in November. They will be shown weekly starting Thursday. Revkin declined to say how the EGHS team fared. We will just have to tune in on Thursday and find out!

Here are all the air dates and match ups. Click here for more information: