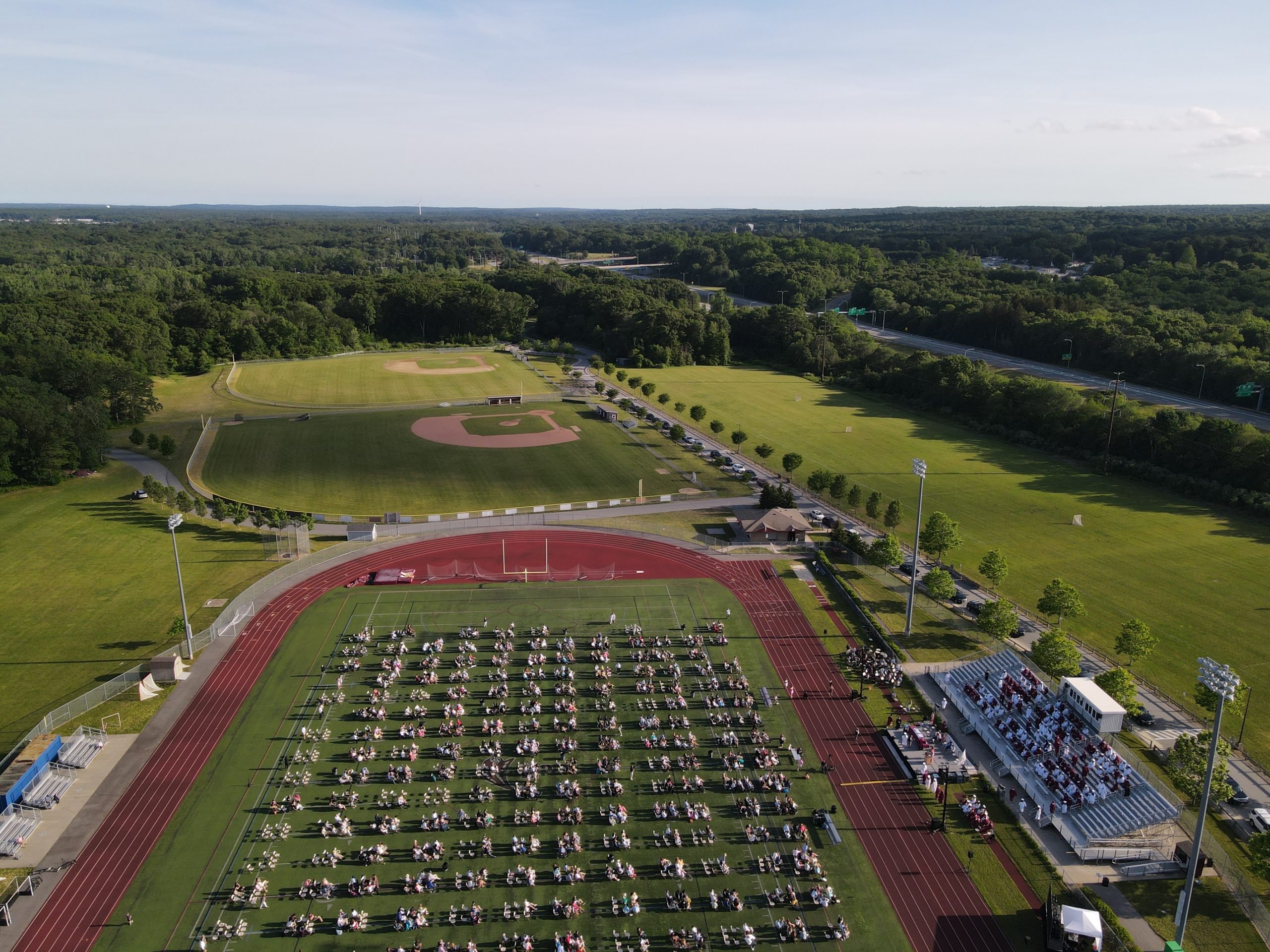 Above: Carcieri Field was the graduation location for the EGHS Class of 2021 June 12. Photos by Chuck Nadeau (find more photos at chuckn.com).

On Saturday, the graduating class of 2021 filled the bleachers of the East Greenwich High School track with a unified sea of maroon and white. After family and friends shuffled into their seats, marked by flags designed by the school’s art department, the school’s band performed as graduating senior, Victoria Duke, EGHS principal, Kenneth Hopkins, and the senior class advisors, Amanda Meredith and Patricia Balles led the class to their seats.

After an introduction by Hopkins, Jake Barron and Victoria Duke, the class presidents, gave a welcoming speech filled with many memories both funny and sincere. Some highlights included mass student outrage over someone’s neglect of bathroom hygiene and an anonymous Instagram account posting photos of the back of classmates’ heads.

However, the class hasn’t treated its high school career as just fun and games.

“Again, the theme of giving back is not lost on Rebecca as she gave her time to make a boot camp for the Young Entrepreneurs of Providence program,” explained DePetro, “This would be difficult in any year but in the current circumstances with covid Rebecca had to do this completely virtual. Rebecca puts her best foot forward and has shown this in school and in our community with her leadership skills, her hard-working attitude, and her adaptability to mold to whatever the current situation is.”

Rebecca Xu continued with her speech, focusing on lessons she had learned from her dance studio on persevering past the seemingly impossible. Like so many other students though, she still struggled to remember that, especially with how unbelievable high school can be at times.

“Throughout my high school career, I’ve probably said the word can’t more times than Dr. Mendelssohn reminded us to fill out the lunch contact tracing form,” she quipped, invoking some laughs.

Her counterpart, Jordan Kalinsky, the class’s valedictorian, opened her speech with the meaning of commencement across the ages. Its definition, having changed from the beginning of something to the end, is much like the goodbyes and fresh start the seniors face.

“Thirteen years ago we began a chapter that would change the course of our lives,” reminisced Kalinsky, “and here we sit at the end of the novel, and guess what, you get to write the sequel all by yourself. You see, commencement is not only the farewell card of an era, but it is the bow that sits atop the gift of your future.”

Next up to the podium, Maya Barnes and Madeleine Brooks showed appreciation to their class’s advisors, Amanda Meredith, a Spanish teacher, and Patricia Balles, the school’s office secretary, and thanked them for all the work they had put into planning events for the seniors, including this year’s graduation. Even with the uncertainty of this year, both advisors were able to organize senior week trips, a graduation walk, and prom for the class.

As grads made their way across the stage to collect their diplomas, 30 students received seals of biliteracy, given to those who showed fluency in a second language, and 137 Rhode Island Department Education Commissioners seals, recognizing proficiency in state assessments. With that, the class of 2021 was asked by Principal Hopkins to switch their tassels as the class stepped down from the bleachers and into a new future. 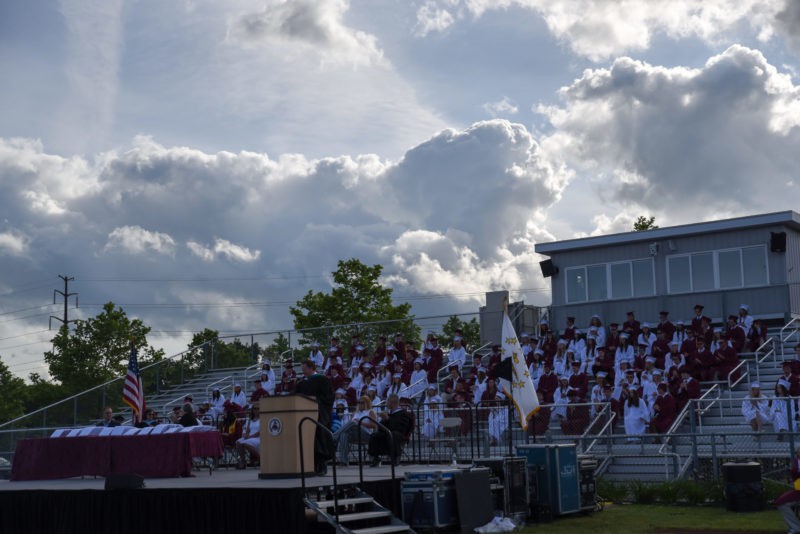 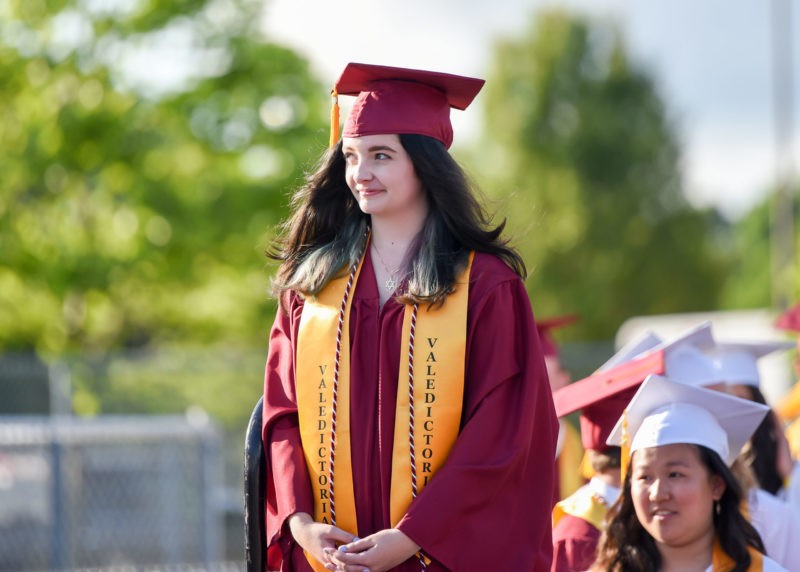 Valedictorian Jordan Kalinsky in line to get her diploma. 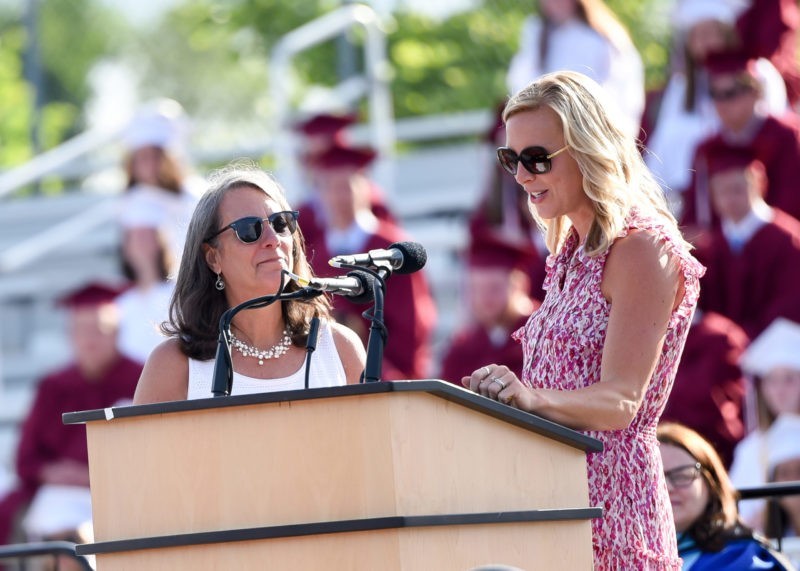 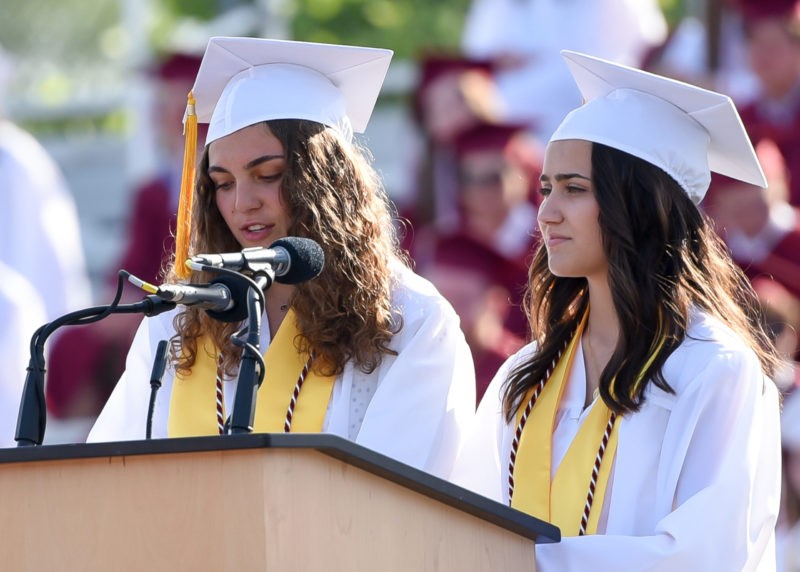 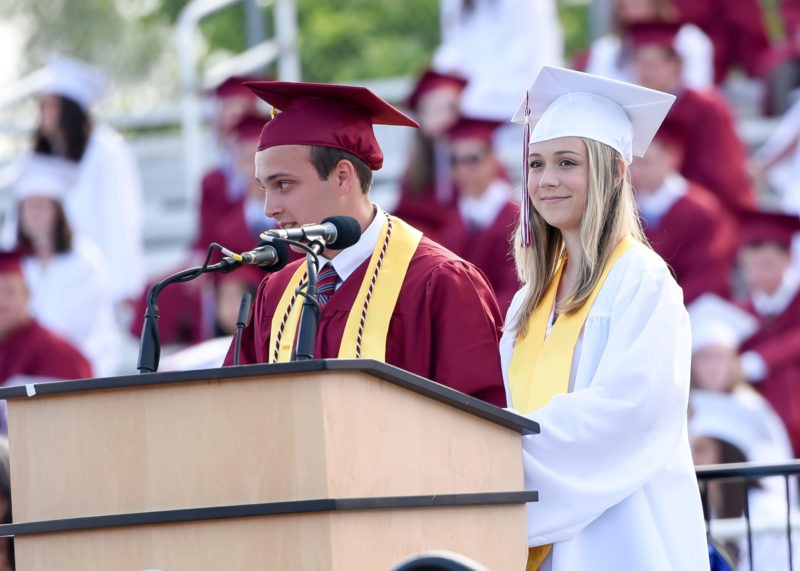 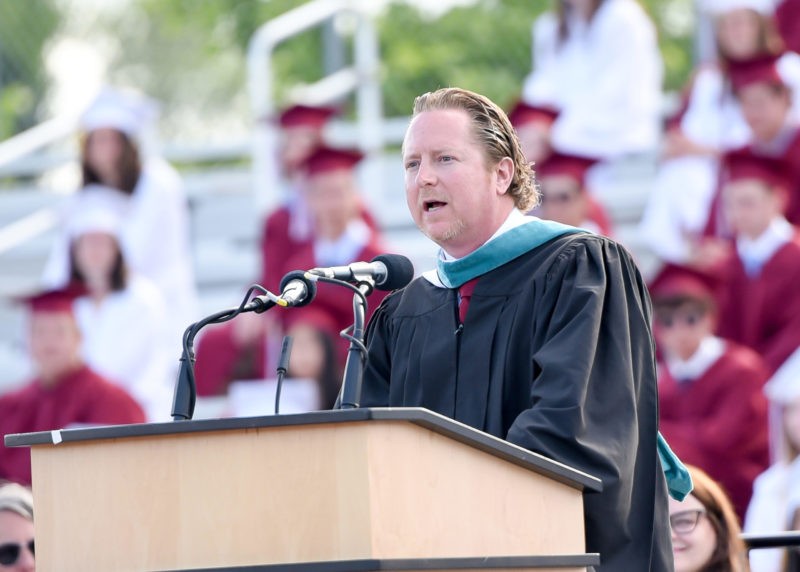 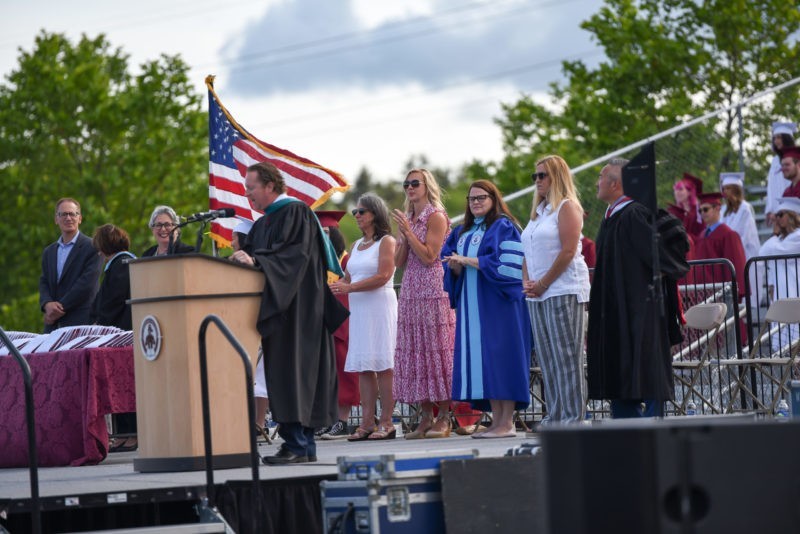 The graduation begins with an introduction by Principal Ken Hopkins.