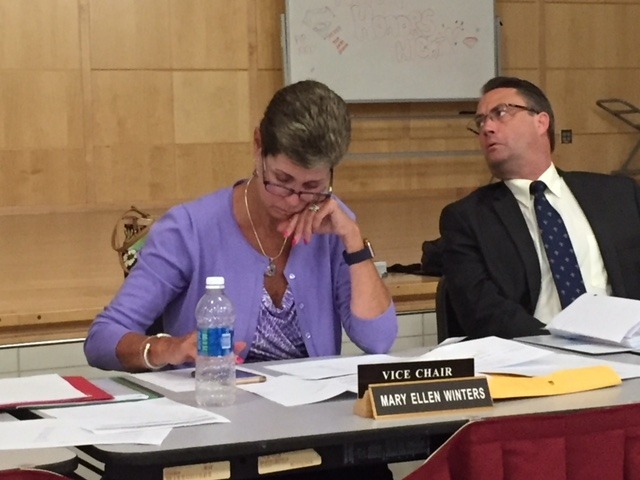 The School Committee voted to approve a $38.9 million budget Tuesday night, cutting $250,000 from capital (i.e. facilities), $80,000 for a new elementary school reading program, $49,700 for a part-time (.6) music teacher at the high school and $68,600 for an IT systems administrator – a position that was vacated last July and remains unfilled, and one third ($49,000) from a computer refresh at Cole Middle School.

Among the budget items that were saved were the school nurse-teacher, the addition of a director of teaching and learning (i.e. curriculum director), two-thirds of that computer refresh at Cole, $62,000 for athletics, and a part-time teacher (.2) to support the advanced course network at the high school.

The School Committee passed a budget in April that sought an additional $1.3 million from the town. The Town Council passed its budget June 6, giving the schools $612,000. 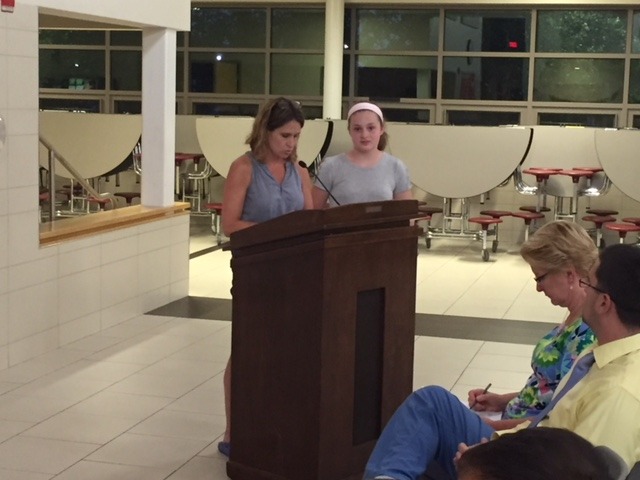 Sharon Siedliski and her daughter Madison, a 7th grader at Cole, talk Tuesday night about the importance of adding back the choral program at the high school.

Last year, a similar budget discussion prompted a full house at the Cole cafetorium. Tuesday night, the crowd was sparse.

Still, there were several impassioned voices seeking the restoration of the choral program at the high school. The choral teacher (a .2 position) was cut a year ago. The School Committee had hoped to restore that position and supplement it with a .6 position. For a time during the meeting, it looked like the School Committee was going to use more money out of its fund balance to make that and the reading program happen. Then the panel’s lawyer, Matt Oliverio, spoke up. “You have to conform your budget to the appropriation,” he said, referring to the budget appropriation passed by the Town Council June 6 which was based on what the School Committee originally requested. In that budget, the committee said it would rely on $67,000 out of its fund balance. A proposal from Committeeman Jeff Dronzek Tuesday would have proposed a $180,000 dip into fund balance.

“I know the public doesn’t want to hear it, but I think you need to adopt what the superintendent Is recommending,” said Oliverio.

Earlier in the meeting, Finance Director Linda Dykeman told the committee she thought they could take up to another $40,000 out of fund balance. From Oliverio’s standpoint, that was as far as the committee should go. The school department has been taking money out of its fund balance for the past several years, first urged on by the Town Council. This year (FY2018), it had budgeted taking $350,000 from fund balance. But with a newly announced about $400,000 deficit from last year (FY2017), the committee now has to take around $750,000 out of its fund balance – that’s more than the Town Council agreed to give the district for the fiscal year that starts July 1 (the council is giving the schools $612,000 in additional funds for FY2019). According to Dykeman, that leaves around half a million in the school district’s fund balance going into the new fiscal year.

To go for $180,000 out of fund balance would be a “bad move,” Oliverio said after the meeting. “Anybody’s going to look at that and say, you know, you’re exacerbating your structural deficit. You’re supposed to be cutting back. Let the other process take place – we need to make a compelling case to the town that they underfunded us. You don’t do that by saying, let’s just wipe out our surplus on the advice of the finance director that you shouldn’t do that.”

The “compelling case” Oliverio was referring to is the program audit the School Committee voted to undertake in May. The result of the audit, which will look at both program offerings and the budget, should provide hard evidence as to whether or not the school district is being properly funded. The audit should be done by August, according to Supt. Victor Mercurio.

“I understand they want to have all the programs,” said Oliverio. “But let us prove that – that’s why we’re doing the audit. Let the audit unfold and take its course.”

His argument persuaded the committee to accept Mercurio’s leaner budget. Not that they were happy about it.

Committee member Lori McEwen referred to words Dykeman had used earlier in the meeting, that any cuts were “at the pleasure” of the committee. McEwen said while she didn’t suppose Dykeman quite meant her words to be taken literally, she wanted the public to be sure to know, “We take no pleasure right now” in making these cuts.

After the meeting, Committee Chair Carolyn Mark said she hoped the choral program at the high school would be restored next year.

“We will need to decide early in next year’s budget process (before course selections are made), but my hope is that we add that position in for next year and get the choral program back on track.”