EGHS Chorus Fights to Be Heard 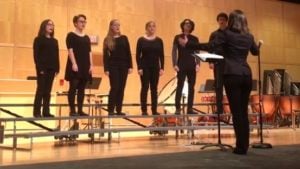 One of the casualties of the School Committee’s challenging budget decisions last June was the part-time choral instructor at East Greenwich High School. In recent years, chorus was offered as a class but with a paid teacher, most recently Jennifer Armstrong (who still teaches chorus at Cole Middle School). When choral students learned that chorus would not be offered at the high school earlier this fall, a few of them decided to form a chorus club.

They recently performed at the Cole Middle School December concert and the response from the audience was so positive that they’ve decided to publicize their plight.

“It was powerful to perform at the middle school concert because all of the eighth grade choral students won’t have a teacher next year,” said Abby White, an EGHS junior. White directs the chorus with help from seniors Lev Simon and Laura Murphy. They needed an adult advisor to form a chorus club, so they asked Bob Houghtaling, the town’s drug counselor. Houghtaling freely admits he is no singer, but he took on the post to support the students.

“It’s the easiest job I’ve ever had,” said Houghtaling. “It’s great being around determined and enthusiastic people. Basically, all I’m doing is giving them an opportunity.”

The group practices once a week for just an hour during the Wednesday Advisory period. Because of their limited practice time together, members must learn the music on their own. The group size has fluctuated between 10 and 15 students.

Ironically, they meet in the library, which also suffered during the June budget cuts. The EGHS librarian position was eliminated so the library is, essentially, just a meeting or study space.

For the December concert, the club performed two songs: “Child of Peace” by David Waggoner, and “Give Us Hope,” by Jim Papoulis.

“It’s about the power of music – it’s universal and a force that we all can participate in and enjoy together,” White said.

“Music is my way to express myself,” said member Kristen Choiniere.

“The chorus community is very supportive. Singing with great people boosts my confidence and also is a lot of fun,” said member Maaike Calvin.

The club has had the benefit of White’s extensive musical background, including a conducting class she took last summer at the prestigious Westminster Choir College in Princeton, N.J. White is also a member of both the Providence Singers and the Rhode Island Children’s Choir.

Before the group performed at the Cole concert last week, White told the audience how they had lost their instructor and had decided to keep singing anyway. After they finished, the audience rose to their feet, giving the singers a standing ovation. White said she was overcome with emotion.

Their success at the concert however, did not deter the group from seeking restored funding for a chorus teacher.

“In terms of having a certified teacher to teach a class at the high school, it’s absolutely necessary for the choral program to survive,” White said. She said more students would participate if there was a teacher and they could receive course credit.

School Committee Chairwoman Carolyn Mark said she applauded the students’ initiative even as she acknowledged the financial challenges facing the district.

“I’m always thrilled when I see our kids stepping up and advocating on their behalf,” she said.

White has taken to Facebook to spread the word, since, she said, most people don’t even realize chorus was cut. In a recent post, she took aim at the Town Council, which is responsible for funding the schools (but not for deciding how that funding is spent) and gave the schools $700,000 less than it requested for the current fiscal year.

The chorus will get a chance to bring its message of music directly before the Town Council on Monday, Dec. 18, when they will perform for the panel (it’s a joint session with the School Committee). They are performing at Shoreside Apartments this week and may have an opportunity to sing this month at Barnes & Noble.