That leaves both tops spots at the high school vacant 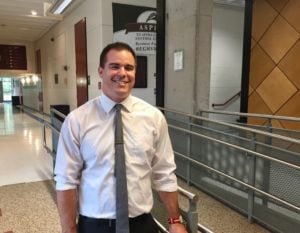 “This was really one of the most difficult professional choices I’ve ever had to make,” Heath said in a farewell video to the students. “But in my heart of hearts, I know it’s what’s best for me and my family.”

Heath lives in Portsmouth with his young family. He has been at EGHS as vice principal since 2017.

Supt. Alexis Meyer said Heath was a “positive leader” at the high school and that he would be missed. She acknowledged having to fill the two top spots the high school is not ideal, especially during this pandemic year. But she said summer gives the district a little cushion and, of course, Mike Podraza is intimately acquainted with the operation of the high school so he will be able to help cover things during the hiring process.

“I have every confidence we will find excellent administrators for our high school,” Meyer said. “I’m not concerned about that.”

In his farewell video, Heath concluded by saying, “Continue to strive for greatness and do the good work the world so desperately needs right now. I’ll miss you Avengers. See you on the other side of the bridge.”