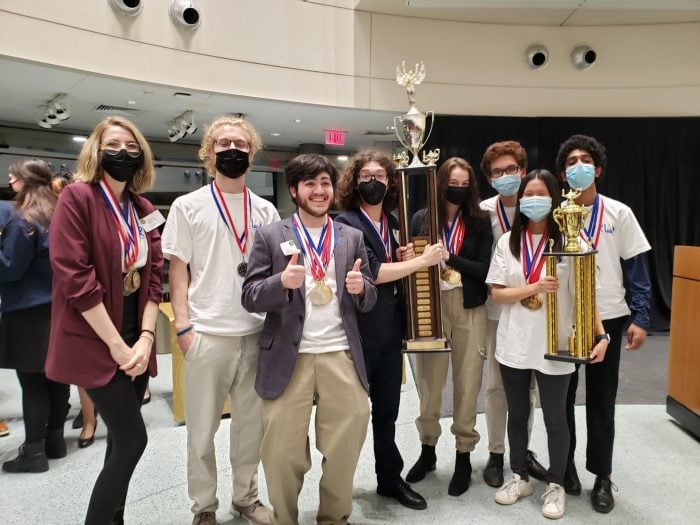 The East Greenwich High School Academic Decathlon team placed first in the state earlier this month, for the first time since 2010. It was a good feeling, especially since the EGHS team has been among the top three finishers for several years.

Acadeca, as it is often called, works to include students across the grade divide. There are three levels of competition: honors, scholastic and varsity, which equate roughly to grade levels, with honors being students with an A average, and so on.

That’s part of the challenge. A competition like this can easily attract honors students. Those with lower grades might not realize they too can compete and, in fact, are needed.

It’s not a small commitment.

The team starts meeting once a week for two hours in October. “It’s very dense reading – almost like an extra class,” Revkin said. “I emphasize their speech writing; and their interview skills – the soft skills that we can practice quite a bit.”

This year the state competition was in-person again – last year’s was virtual – and that meant students got to meet other students.

“The tests are the same in either case but it was a lot of fun to be in a group setting,” Bassen-Alexander said.

Having won states, the EG team moves on to the nationals in early April, which will be virtual again this year. That’s a disappointment but, for Revkin anyway, a bit of a relief, since he would have had to organize a significant trip in just a few weeks.

Regardless of what happens next, it was exciting to win states.

“We got second last year but this year we really stepped it up,” said Bassen-Alexander.