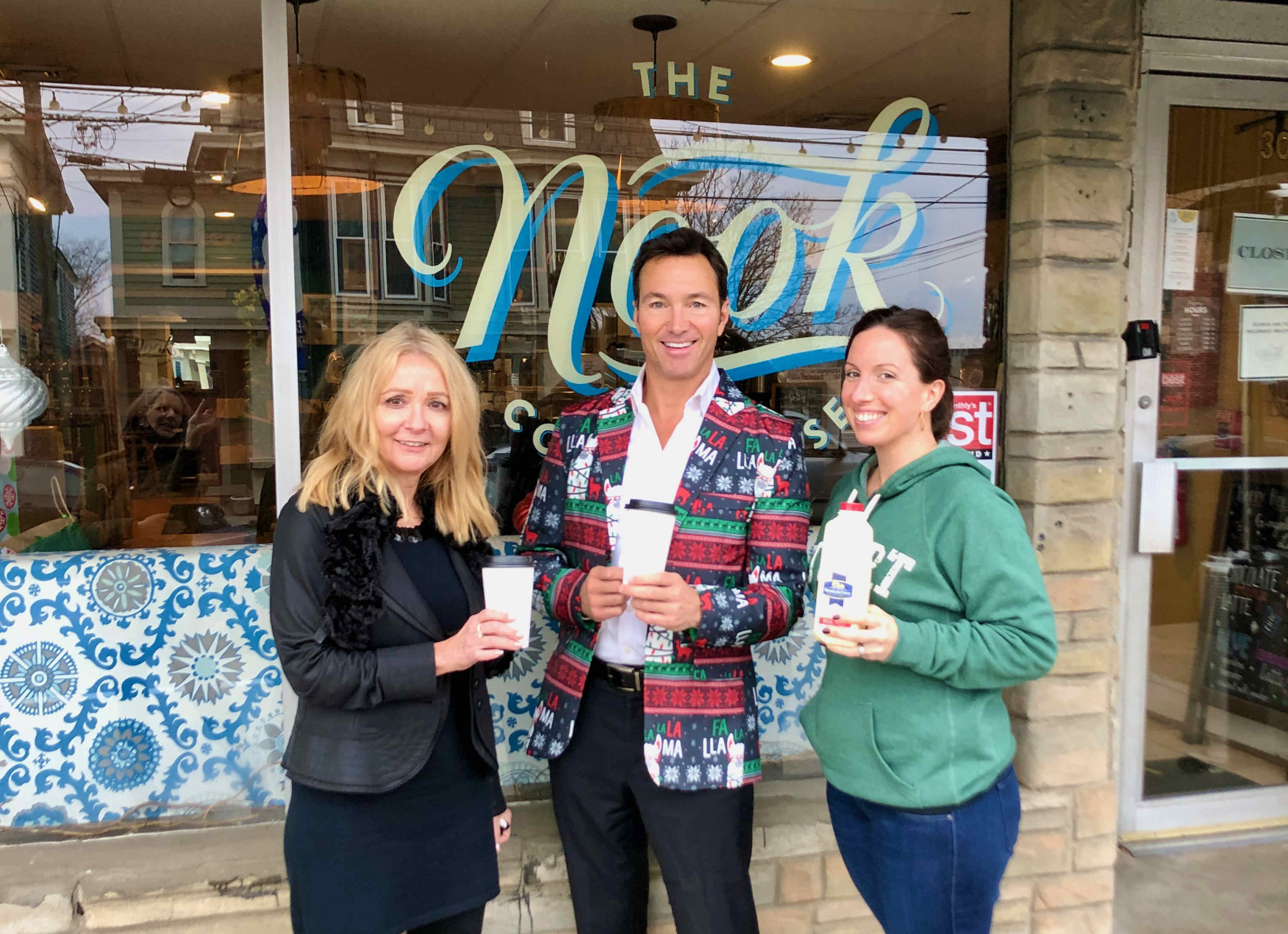 Above: From left, Susan Caito and Jim Joly of Greenwich Bay Wealth Management, and Shannon Wylie Vincelette of The Nook.

Jim Joly takes December seriously. He kind of has to … the spirit is in his name (minus one ‘l’). So, perhaps it’s not surprising that he’s fond of eggnog lattes. So fond, in fact, that earlier this month he suggested Shannon Wylie Vincelette add it to The Nook’s December drink menu.

Joly’s financial management company’s office is a block down Main Street from The Nook, which is owned by Wylie. Joly’s a regular.

“What better way to celebrate the holiday than with a latte?” he said. Especially if buying one could benefit a local charity.

Wylie liked the idea and they started to brainstorm how to offset some of the costs and what local charity to support.

In his travels, Joly had learned of eggnog from Mountain Dairy in Storrs, Conn., and something clicked. Joly is a graduate of UConn and ate his fair share of Mountain Dairy ice cream during his time there, he recalled. His colleague Susan Caito decided to reach out to the dairy to see if they would want to donate some ‘nog to the venture.

“I called over to the dairy and they were wonderful,” said Caito. She mentioned Joly’s connection to UConn and her own to Connecticut state schools and the dairy was “more than happy to help,” she said. Caito lives in Connecticut so she picked up 50 quarts – the dairy has offered another 50 to the program – and The Nook has been selling eggnog lattes over the past 12 days – more than 110 lattes so far.

The local beneficiary is The Academy Foundation, run by Bob Houghtaling, which supports mental health and substance abuse issues. Houghtaling was thrilled when he heard.

“It’s fantastic that the community is supporting things like mental health and substance abuse issues,” Houghtaling said. “The Nook’s generous support during a time when people are struggling with the COVID crisis is wonderful.”

You can get your eggnog latte fix at The Nook for the rest of the month, knowing you are benefitting a good local cause and bringing a little more jolly into the world.