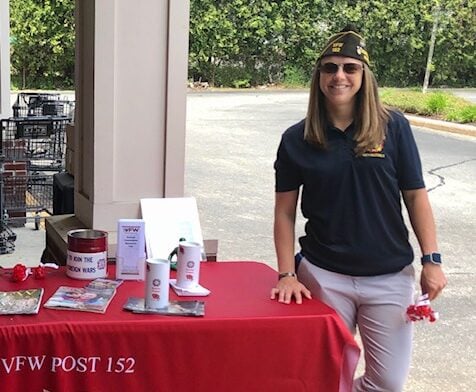 Above: Sarah Cavanaugh in 2021, before her indictment. Photo courtesy of VFW Post 152, North Kingstown.

Sarah Cavanaugh had started working as a social worker again

East Greenwich resident Sarah Cavanaugh, who pleaded guilty this week in U.S. District Court in Providence to a raft of fraud charges for posing as a Marine veteran to gain access more than $250,000 from veteran-related charities, has also been prohibited from seeking work as a social worker. This came about after she was found to have served as a therapist as recently as July 21, weeks after she agreed to plead guilty to charges related to her work as a social worker.

Cavanaugh, 31, pleaded guilty before U.S. District Court Judge John J. McConnell Jr. Tuesday to forgery, aggravated identity theft, fraud, and fraudulent use of military medals – all activities that stemmed from her employment as a social worker with military veterans.

According to court records, starting in 2015, Cavanaugh used her position as a licensed social worker at the Rhode Island Department of Veterans Affairs to gain access to documents, personal information, and medical records of a Navy veteran who had cancer and a Marine veteran. She used those documents to create documents showing she was a Marine veteran with cancer, then went on to use that story with 10 veteran-supporting nonprofits and 2 government employee benefits programs to gain at least $250,000.

In addition, Cavanaugh portrayed herself as a wounded veteran and a recipient of a Purple Heart and the Bronze Star, replicas of which she bought and wore on a Marine uniform she wore at public events, including the East Greenwich High School graduation ceremony on Carcieri Field in June 2021.

When she was first indicted this past March, she was ordered by the court to “continually or actively seek employment” and there were no restrictions based on that employment. Through her lawyer, Cavanaugh said she found work at places including Dunkin Donuts, Lowe’s, and Petro as well as AIDS Care Ocean State and Northeast Family Services, but that she was fired from all of them after the employers learned of her then-pending criminal charges.

But Cavanaugh was hired by a Providence-based therapeutic service practice at some point during this time and was working as a therapist even after she agreed to plead guilty July 12.

This came to light when a client had a counseling session with Cavanaugh on July 21. The session had gone well and the client had given Cavanaugh financial information to pay for the session. The client, thinking of continuing therapy with Cavanaugh, decided to do some research on her to see if she would be a good “long-term fit,” according to court documents. That’s when the client learned of Cavanaugh’s guilty plea. At that point, the client contacted the U.S. Attorney’s office and expressed her shock that Cavanaugh could be working as a therapist considering the charges to which she’d already agreed to plead guilty.

In a phone interview, the client said she was particularly upset because she was seeking therapy as a past victim of fraud.

“I told this lady my entire life story and shared with her in detail my previous history of fraud,” she said. A representative of the company that had employed Cavanaugh told the client they had been unaware of the criminal charges.

The court also learned Cavanaugh, using her married name of Sarah Bregler, registered “Stet Therapeutic Services LLC” with the R.I. Secretary of State in June, listing herself as the agent for the business and listing what is believed to be a family member’s address as the agent’s address. She also created a website (stettherapeuticservices.com), offering counseling services under the name “Sarah B.” and including a payment portal.

Based on all of this information, the court modified the employment condition on July 26, according to court documents, “prohibiting her from being employed in any position as a licensed independent clinical social worker in which she has access to patient identifying information, medical information, or financial information. Further, defendant should be prohibited from holding herself out as a freelance or self-employed independent clinical social worker available for therapeutic consultation in any capacity that would enable her to access said patient information.”

The court took further action July 31, prohibiting Cavanaugh from seeking employment as a social worker “in any capacity outside of the State of Rhode Island.” Additionally, she is required to disclose her criminal case history to current or prospective employers and she may not work in any position in which she had “unmonitored or unsupervised access to the means of identification of others, or the medical or military records or information of others.”

Cavanaugh will be sentenced Nov. 10. Coincidentally, that is the anniversary of the founding of the U.S. Marine Corps and the day before Veterans Day. 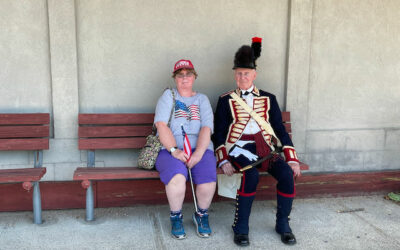 Photos are such a powerful way to convey a story. Most of these photos were taken with an iPhone –...