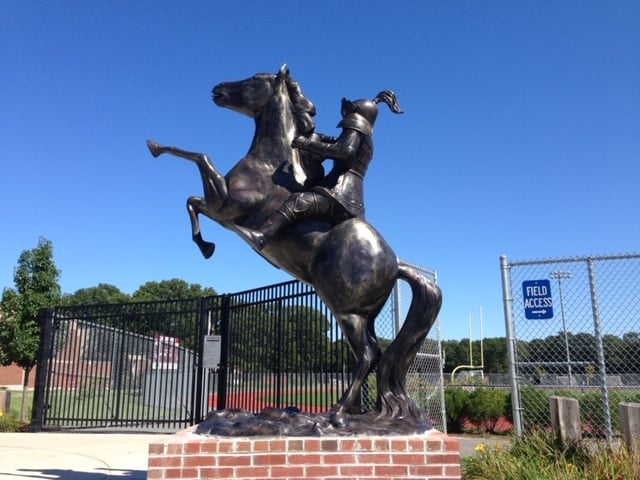 The winter sports season at East Greenwich High School is just getting into full swing. With an exciting fall season now behind us, a new set of sports are on the horizon. These include hockey, basketball, indoor track, wrestling, and swimming.

After an initial loss to Mount Saint Charles, 3-0, the Avengers’ Hockey team has been on fire, winning games against Barrington and North Kingstown 8-1 and 4-0 respectively. Seniors Sonny Arsenault, captain Michael Healey, PJ Casey, Peter Doorley, and Cael Dunwoody will look to run the show. Arsenault has provided a team-leading five goals through the first three games. Last season, the Avengers put together an incredible 19-7-1 record in Division 1, before ultimately being defeated in the Rhode Island State Championship by Bishop Hendricken. The Avengers are looking to return to the state final this season.

The Girls Coop Hockey team (made up of athletes from EG, Cranston West and Cranston East) has had a rough start, with three losses.

The Boy’s Basketball season kicked off on Thursday, Dec. 8, in a tough loss against the Coventry Oakers, with a final score of 71-60. Their current record sits at 2-4, with double-digit wins against both South Kingstown and Narragansett. Last season, the Avengers finished with a 4-16 record overall. The team will lean on the likes of seniors Luke Pedro, Ryan Marcantonio, Grogan O’Brien, Will Erickson, and Ethan Faunce, as well as standout sophomore Rees Maccarone. Their next games will take place as a part of the holiday tournament Dec. 27-28, hosted by Cranston East High School.

Girl’s Basketball began their season on Dec. 14, in a home win against Cumberland High School, 57-31. They also beat Woonsocket in a blowout, allowing just 10 total points in a 67-10 victory. The team is 2-2 going into the Holiday Classic tournament next week. Alex Mega, who hit the career 1,000 point mark last season, will look to continue her success this season, alongside fellow seniors Faith Basler and Meghan Pagliaro.

Starting with Boys Indoor Track, Bates College commit Evan Berthiaume finished in first place in the 300 meter event at the Metropolitan and Suburban Dual Meet, running an impressive 37.93. Robert Brooks was not far behind, clocking a 39.34 in the race. The 55 meter sprint was led by Borys Carrison for East Greenwich, who finished in 12th place with a time of 6.94 seconds. Standout long-distance performances came from Nick Martin and Justin Distefano. Martin ended in second place overall in the 600m, while Distefano came fifth in the 1000m event. Additionally, East Greenwich’s own Thomas Speltz of Moses Brown, and soon Colby College, finished in the second overall positions in both of his events, the 1000m and 3000m races.

For Girls Indoor Track, Providence College’s new recruit Reese Fahys won the 3000 meter by a whopping 20 seconds in the first meet of the season. Fahys registered a time of 10:31. Meanwhile, UMass Amherst commit Rylee Shunney was a close second in the 1000m, with a time of 3:09. The EGHS relay teams also put up a respectable performance, ending the meet in fifth place in the 4×400, and sixth in the 4×200 relay.

East Greenwich High School’s Wrestling team is an extremely young one this year, with not a single senior on the roster. As a result, they got off to a rough start in their first meet against Tolman High School, but came back to defeat Central Falls 42-12 in their second match. Freshman Jordan Lally has won all three of his matchups so far this season. The team is captained by junior Darius Anvar.

The final sport at East Greenwich High School this winter is Girls and Boys Swimming. Swimming is unique in that the scheduled season does not start until the new calendar year. This season, the team will be captained by Madison Siedliski and Owen Thibodeau. Other seniors boys on the team include Robert Sprague, Aaron Stange, and Matt Carosotto. Senior girls include Jessika Finger, Megan Huntley, and Lauren Reikhrud. The first meet for the team will take place on Jan. 11 against Barrington.