EG to Start Vaccinating People 75 & Up 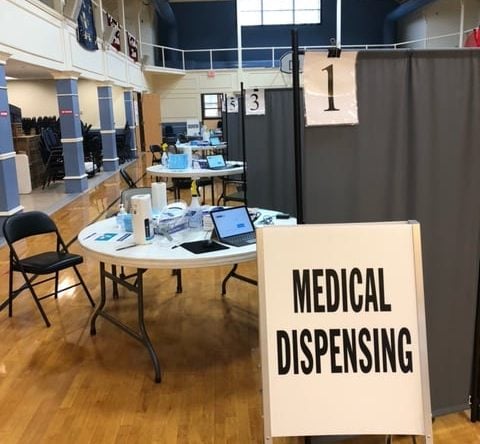 The town has only 70 doses initially; the state is also ending restaurant curfew

By Elizabeth McNamara and Laura Weick

First order of business: Vaccination for the general public is here! But, it will be slow going and, in East Greenwich, the town will reach out to you if you are one of those to receive a dose.

The state announced this week it is releasing 5,170 vaccine doses for the general public – the first such distribution – and 70 of those doses are going to residents of East Greenwich, Town Manager Andy Nota said Thursday.

The clinic already established at Swift Community Center will serve as the place of distribution (POD) for these additional vaccinations starting Monday afternoon. The clinic will receive 1,230 total doses of vaccine for the seven communities it serves. (You can see how the distribution breaks down in the graphic below left.)

Each community will handle sign ups for their allotments. In EG, Nota said they’ve decided to start with names and phone numbers the town already has. Specifically, they will draw from the list of residents who use the Senior Center, starting with the oldest residents on that list – which, Nota said, has more than 70 people age 75 and older on it.

Town employees are reaching out to those people right now to get them signed up for a slot either Monday or Tuesday afternoon or sometime on Wednesday (Feb. 1-3). All those who get the vaccine next week will be signed up to receive their second dose March 1, 2 and 3.

Second order of business: The town is also setting up phone lines for all residents age 65 and up to call and give their contact information so the town can build a contact list for future public vaccine clinics. We will provide the phone number to call as soon as it becomes available – probably by Friday (1/29) so check back. (Important: This is NOT a signup for a vaccine appointment, but rather so the town can reach you WHEN they have a vaccine dose for you.)

“Everything is happening fast,” Nota said. While he anticipates the vaccine will be allotted in relatively small batches, the contact list will allow the town to reach out quickly as soon as a new allotment is announced.

“We want to be prepared with immediate information,” Nota said. He issued this statement Thursday night:

Beginning, Friday 1/29/21 the Town is requesting that all East Greenwich residents, age 65 and older to call or email to provide your contact information for our records.   This information will be held until sufficient vaccine supply is available for you to be contacted and registered at a future East Greenwich clinic.  At that time, the call list will be exercised from the oldest to the youngest on the list, this is not a first come first served process.  You will be requested to provide your name, address, age, phone and email.  At this stage, the Town is not anticipating large quantities of vaccine to arrive for many weeks, although in case that schedule should change our goal is to have a comprehensive contact list established over the next few weeks.

Other communities are doing things differently. In Warwick, they opened up the phone lines for people to register for one of their 390 vaccine slots at 2 p.m. Thursday – all the slots were filled by 2:31 p.m. The City of Warwick is saying to monitor its website – warwickri.gov/vaccine – and news reports for information about more vaccine signups.

Also on Thursday, the state Dept. of Health released its overall vaccine plan, with the caveat that this was an “estimated” timeline. See graphic below. 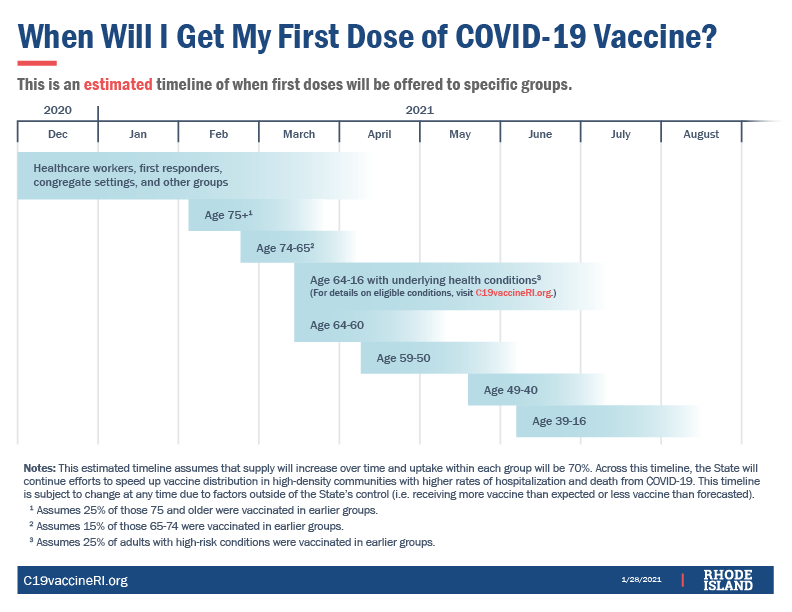 During the weekly COVID-19 press conference, RIDOH Director Nicole Alexander-Scott said she expects the vaccine to become available to those over the age of 65 by mid-February, but how quickly the process goes depends on vaccine availability.

Since December, groups like health care workers, first responders and nursing home staff and residents were able to receive the vaccine. As of Thursday, 86,315 vaccine doses have been administered in Rhode Island, which includes 64,435 first doses and 21,880 second doses.

“Keep in mind that many older adults will have already been vaccinated,” Alexander-Scott explained. “We have been vaccinating in nursing homes and assisted living facilities for weeks, and vaccinating will start soon for people who are 75 years of age and older and that availability will continue. Going forward, age will continue to be the primary consideration as more people become eligible for the vaccine.”

According to Alexander-Scott, people between the ages of 60 and 64 are expected to receive the vaccine in March; those between 50 and 59 beginning in April;  those between 49 and 40 beginning May and those 39 years or younger in June.

Beginning in March, those between the ages of 16 and 64 with underlying health conditions including kidney disease, heart disease, lung disease, diabetes or are immunocompromised will be able to receive the vaccine if they have not already done so, according to Alexander-Scott

Geography will also be considered when prioritizing the vaccine, Alexander-Scott said. She said vaccine distribution will be accelerated in communities including Central Falls, Pawtucket, Providence, Cranston and parts of North Providence because they have been hit the hardest by the pandemic.

“People in certain communities are at greater risk,” Alexander-Scott reiterated. “It’s not because of genetics, it’s not because of anything particular to those individuals, it is connected to the environments and the conditions in those environments. Unfortunately we have the example that the hospitalization rate in Central Falls is 67 percent higher than the statewide average. The hospitalization rate in Providence is 58 percent higher than the statewide average, Getting people in harder hit communities vaccinated quickly is the right thing to do.”

No occupations are prioritized during the remainder of the vaccine rollout, including teachers, who have asked for priority. Alexander-Scott said that teachers since 58 percent of the state’s teachers are 55 years or older, live in a hard-hit community or have a high-risk condition, making them eligible for early vaccination anyway.

Alexander-Scott also said the state will lift the early closure advisory on restaurants in the state effective Sunday. Since November, restaurants had to close at 10 p.m. on weekdays and 10:30 p.m. on weekends. She explained that this would help “ease the burden” on the struggling hospitality industry and that the state’s waning test-positive rate made it safe for them to remain open. All other guidelines such as social distancing and mask-wearing will be required in restaurants, and bar areas must remain closed.

Yesterday, the state reported 618 new cases out of 18,678 tests, making for a 3.3 percent test-positive rate. The weekly test-positive rate is 4.1 percent, down from last week’s 5 percent. Additional Rhode Island COVID-19 statistics can be found here.

Gov. Gina Raimondo once again did not attend this week’s press conference. Lt. Gov. Dan McKee, who is expected to take over as governor if Raimondo is confirmed as Secretary of Commerce under President Joe Biden, did attend.

McKee did not speak until the question and answer part of the briefing, when reporters peppered him with questions on his transition – moving as expected – selection of a new lieutenant governor – by the end of February – and if there will be cuts to the state budget – too early to tell.

“[I’m] certainly anticipating that the [national] stimulus is going to be very aggressive based on a new president in Washington so until you have those numbers, you’re not going to speculate on those outcomes,” McKee said.