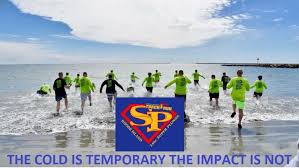 Cole science teacher Adam Scott has become the face of Unified Sports at Cole Middle School, first as coach of the Unified Basketball team, then establishing a Unified Cross Country team at the middle school and now as coach of the EGHS Unified Basketball team. Under Scott’s leadership, Cole Middle School was Rhode Island’s first (and still only) middle school to be named a Special Olympics Unified Champion Schools Banner School. Cole was also named to ESPN’s inaugural 2018 National Honor Roll for its Unified Sports program.

While most plungers will run into the ocean March 22 and dunk themselves once, a hardy crew of 16, including Scott, have vowed to plunge every hour for 24 hours. That’s 24 plunges into the decidedly chilly Atlantic, daytime through nighttime and back into daytime.

The super plungers at Salty Brine State Beach will make their first plunge at 1 p.m., March 21. The crew pledges to plunge hourly regardless of weather conditions and temperature. The final plunge, #24, will take place on Sunday, March 22, at noon as part of the 13th Annual Torch Run Plunge.

It’s all about raising money to support Rhode Island Special Olympics and Unified Sports. You can support Mr. Scott’s endeavor by clicking here.