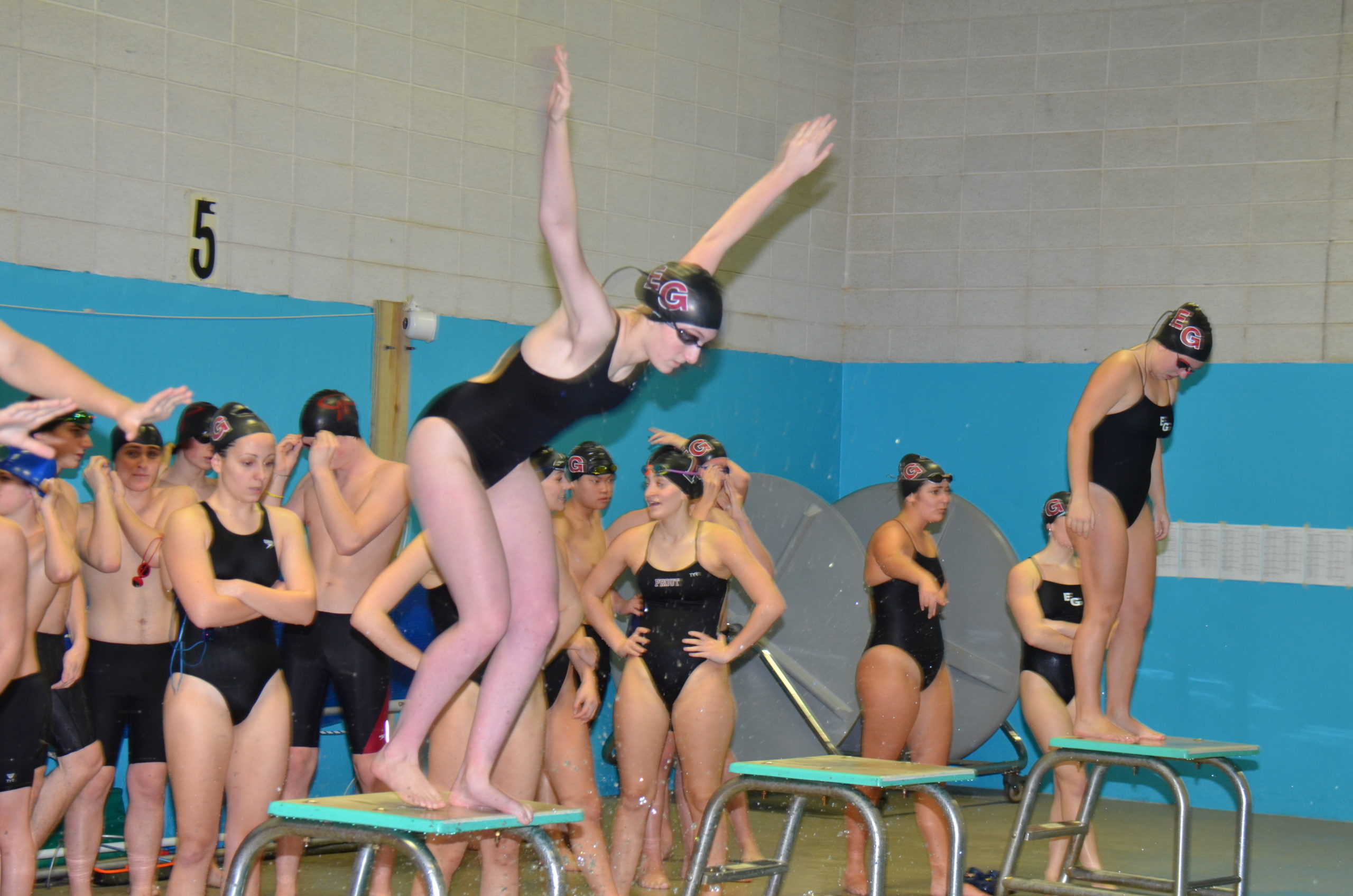 Above: Senior Natalia Oganesian at the start of a her leg of a relay.

Sophomore Nick Brita, one of the best swimmers in the state, has been plugged into a variety of races.

The EGHS boys and girls swim teams are chock full of young swimmers getting ample opportunity to develop their skills, even if the teams’ win records don’t reflect that. Girls Swim is 3-4 on the season and Boys Swim is 0-6.

“We graduated 14 girls over the past two years, all really competitive swimmers,” said Coach Gina Hand, now in her eighth year guiding the Avengers. Because of that, “this has been a different season for them.”

She credited senior Ana Karabots (the lone senior on the team) and junior Bella Petito as co-captains, for “showing a lot of leadership and bringing the younger swimmers along.”

Karabots has been important for the Avengers in butterfly, middle distance free and relays, Hand said. Petito has been strong in 100 free, 100 breast and swimming backstroke in IM relays.

In general, said Hand, the juniors have really come through this year. In particular, she noted Grace Sheridan and Genevieve Cava as utility swimmers, Katie Moran in breaststroke, Natalia Oganesian as a distance swimmer.

Hand also noted sophomore Audrey Kling as another of those swimmers who can fill in and do well wherever she is placed.

A number of freshman have stepped up as well, Hand said, in particular, Jessika Finger, who was named freshman swimmer at the Bay View Invitational and has been strong in the 200 IM and 100 backstroke all season.

For the boys, “there’s a lot of potential,” said Hand. “We have a good number of freshman boys with enthusiasm and eagerness.”

While it’s been a tough couple of seasons for Boys Swim, this year’s team has been competitive in every meet, said Hand.

Co-captains and seniors CJ Perrone and Justin Chen have been team leaders for the young team as well as top scorers. Perrone has been a sprinter this year and Chen is the team’s best breast stroker, while also helping out in butterfly. Senior Anthony Morganti has been working in tandem with Perrone on the 50 and 100 sprint freestyle events as well as in the relays.

Nick Brita, a sophomore, has been the team’s highest scorer. One of the top swimmers in the state, Brita is starting to show real leadership on the team, Hand said.

She said the freshmen are also scoring points for the team.

The team has had more than its share of injuries and illness but is nearly back to full strength.

Junior Katie Moran has been a strong breaststroke swimmer for the team.

Junior Grace Sheridan has been able to compete in various strokes, including breaststroke, as seen here.

Cheering on fellow swimmers at a meet against Prout last week.