Above: Justine Caldwell signs the certificate making her officially a state representative.

New East Greenwich state Representative Justine Caldwell, and Senator Bridget Valverde were sworn in at the State House Tuesday, along with returning state Senator Lou Raptakis, in a day full of pomp, circumstance and some protest. All three are Democrats. Caldwell beat incumbent Anthony Giarrusso; Valverde won the seat vacated by Mark Gee.

“It was an incredibly humbling experience to be sworn in to the Rhode Island House of Reps today,” said Caldwell via email. “To be in the chamber as an elected official – rather than being there to lobby one! – reminded me of the hard work it took to get there and to not take a single moment in there for granted.”

Caldwell, who represents EG and part of West Greenwich, said Tuesday was “a day to look forward at what’s possible for Rhode Islanders and how I can be a part of that movement.” Bridget Valverde is sworn in as state senator for Dist. 35 on the opening day of the session, Jan. 1, 2019.

Valverde, who represents most of EG and parts of NK, SK, and Narragansett, said she also was familiar with the State House, but that Tuesday was different.

“It was definitely interesting to be sitting in the chamber in one of those seats, seeing it from that perspective,” she said. Valverde voted in favor of Senate President Dominic Ruggiero, Democrat, who won reelection easily, 36-2.

In the state rep chamber, Speaker Nicholas Mattiello also won reelection 47-9, but Caldwell joined 18 others in abstaining from the vote. Outside that chamber, a few dozen people protested Mattiello, calling for a new speaker and reforms in the way business there is conducted. Caldwell and family at the in the chamber Tuesday: husband David Caldwell, and children Luna and Escher.

But the festivity of the day won out, with lots of family and friends crowded into the chamber with the newly sworn in officials.

Both Caldwell and Valverde spoke of their hopes for the session. Caldwell said she was looking to pass the Safe Schools and Reproductive Health Care acts, as well as focus on jobs, education and the opioid crisis.

Valverde said she also was looking to pass bills “affecting women and families,” including an increase of the minimum wage, pay equity for women and sexual harassment and environmental legislation.

She said it was really nice to see her niece, Chloe, 7, experience the moment, especially as Governor Gina Raimondo and Secretary of State Nellie Gorbea passed by, shaking the young girl’s hand. Women now hold 16 out of 38 seats in the state Senate. 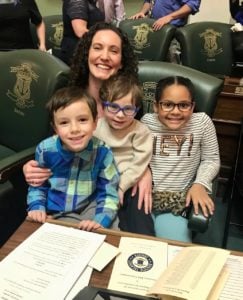 Bridget Valderde in the Senate chamber with her sons, Oscar and Elliot, and her niece, Chloe.

Caldwell also commented on the rise of women in government roles.

“My biggest hope is this,” she said, “that the young women and girls who watch what happens at the State House, who followed the campaigns of the record number of women who gained seats in our House and Senate, will see a State House that is a safe, welcoming environment for them and they won’t think it’s a place where they don’t belong, but a place where they will be sitting someday.”

Sen. Lou Raptakis, Dist. 33, (Coventry, EG) has served at the State House almost continually since 1993, first in the House (1993 to 1997), then in the Senate (1997-2011; 2013-to present). He said Tuesday his priorities remain giving the governor line-item veto power, and protecting against drunk drivers and people who leave children in vehicles. While he’s personally pro-life, Raptakis said he supports the abortion rights enshrined in 1973 by Roe vs. Wade and would support legislation making that state law, but would not want any kind of expansion.

Wednesday marks the first full day of business at the State House.