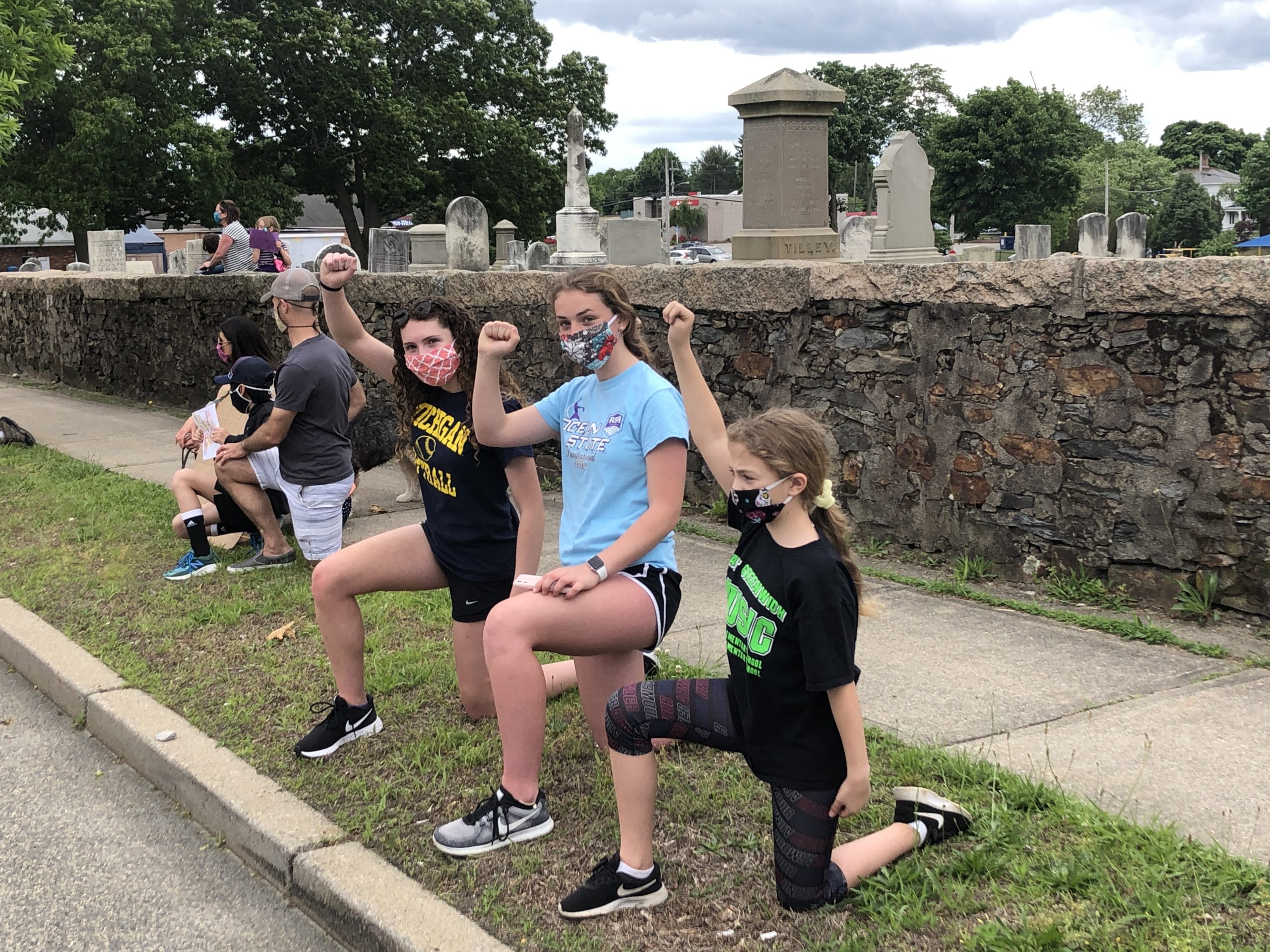 More than 250 people turned out Sunday.

Kneeling for 8 minutes and 46 seconds.

It started Tuesday, with two people, a sign on a stick in a bucket of cement, and a passion for justice. On Sunday, those same two people were joined by hundreds of others, all to support justice for “all Americans,” as the original sign said, and to proclaim that “Black Lives Matter.”

The protesters were of all ages and different colors, though the vast majority of attendees were white.

For Trevor Alves, a black man who lives in East Greenwich who attended the protest with his family, it felt good to see everyone there.

“We felt it was important to show our support and it feels good to know that everybody’s come out to show some support for us, as well,” said Alves.

Lucy Eldridge, 16, of Warwick, was there with her cousin, Chloe, 14, a student at Cole Middle School. Eldridge attended the protest in Providence Friday night and wanted to bring some of that energy to East Greenwich. She ended up leading several of the chants, including a chant in which she listed the names of several black men and women who died at the hands of police.

For Karim Khanbhai of East Greenwich, a pediatrician, enough was enough. “This affects us all,” he said, recalling the image of now-former Minneapolis police officer Derek Chauvin with his knee on the back of George Floyd’s neck for 8 minutes and 46 seconds, long after Floyd lost consciousness. Floyd died soon after. “If not now, then when?” Khanbhai said.

“We live in a town that looks mostly like me. But that does not mean we can’t affect change, “ Caldwell said. “When George Floyd … called out to his mom, that was a call to all of us.”

She called for an overhaul to the Police Officers Bill of Rights, a state law that grants police officers extensive protections.

“I came out to support a system I think it not really working. And I came out to lend my support that [George Floyd] gets his justice that he deserves,” said Callanan, a Republican.

Some in the crowd were heartened by the gathering.

“I’m just so glad to see white-bread East Greenwich come out like this,” said Millie Lukens. “It’s about time.”

Matt Lukens, who turned 18 in the tumultuous year 1968, said, “We thought we did a lot to change things. It hasn’t changed.”

Meanwhile, the chants went on.

For the original organizers, Harry and Isabelle, the Sunday protest was beyond what they had hoped.

“What a tremendous outpouring of support,” said Harry, an EG native who has been here during the COVID-19 pandemic but will return with his partner Isabelle to New York. He said people have asked how they can get involved. Because they will be returning to New York, Harry said he hoped someone or a group would step up to take the movement over. (They can contact [email protected] if interested.)

“It would be sad to end it here,” said Isabelle. She recounted what one participate had said to her earlier in the afternoon. “You have no idea what this means to me as a person of color in this town,” the woman told Isabelle. “That’s why we wanted to do it,” Isabelle said. “It’s not about us. We’re here for the cause.”

EG News knows this is a challenging time. If you are able, consider supporting local news with a donation. Use the Donate button below or send a check to EG News, 18 Prospect St., EG, RI 02818. And if you need some help, let us know: contact [email protected]. Together we are stronger.