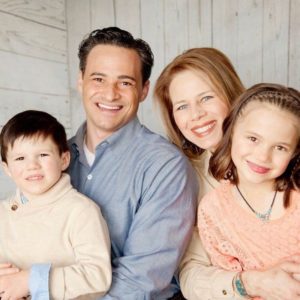 Mike and Laura Bottaro with their children, Dustin and Mia.

Mike and Laura Bottaro make it look easy. They are a good looking couple with two beautiful children and a thriving business. You kind of want to hate them. But when you talk to them, they make it clear: marriage can be great but it’s also tough.

They met in law school at the University of Colorado at Boulder.

Mike was in the library one day during third year – NOT his usual haunt, he emphasized – when he spied Laura.

“My scheme was to ask her to be my partner on the moot court team. I thought that was a pretty good way to get an in with her. She flatly rejected me,” Mike said.

But he kept asking. Finally, Mike called early one morning and asked Laura to lunch.

“I thought, well, if someone is persistent enough to call me first thing in the morning … I thought, yeah, I’ll give this a shot,” said Laura.

That first date led to another and another. Soon they were a couple.

“She liked to play pool and she liked to drink beer,” Mike said, smiling.

After graduation in 2000, they moved to Denver and started working.

“It felt like we were playing dress up,” Laura said.

They were enjoying the young and unencumbered life. But after 9/11 and, later, when Mike’s mother began ill, they began to think seriously about moving closer to family. They ended up in Rhode Island but it took them a few more years to find East Greenwich. That happened in 2009. And suddenly they felt settled for the first time in Rhode Island.

“We bought a house, we had a child and we became part of the community,” said Laura.

And they both work for the personal injury firm Mike founded in 2010, Bottaro Law Firm.

It’s a busy life so making time for each other has been key.

“I think what has worked in the last few years is being intentional about trying to spend time to talk,” said Mike. A little over a year ago, they started a Wednesday morning coffee hour just for them. At 5:30 a.m.

“We know midweek that we have space and the kids aren’t awake and it’s quiet,” Mike said.

They both make it clear, though: they are not perfect.

He said the book “The 5 Love Languages” has helped them to understand  how people give and receive love. What works for Mike, for instance, hearing, “You look great today!” doesn’t really work for Laura, who would much rather have Mike express his love by cleaning up after dinner.

They’ve found mentors in family but also through church. They are active members of Christ Church.

“I think one of the reasons we’ve endured so well is we’re both so determined,” said Laura. “Neither of us give up on anything. We just keep saying, we’re not going to give up.… When things aren’t perfect, you have to think about the long game. You can’t get caught up in the daily swings of when things are high or really low.”

She added, “You have to think about getting through and what the real ultimate goal is, which is our family and our love for each other and being together for the long term.”