EG Love Stories 2018: A Match Made at the Grange Hall 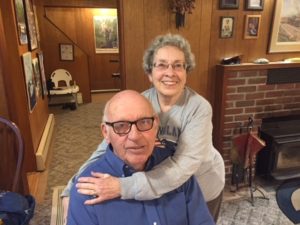 “She puts up with me,” is how Art Stenberg describes how he and Judy Stenberg have survived – and thrived – through 55 years of marriage.

Judy says it comes down to trust – trusting each other.

They were from separate parts of the state in the days when that meant more than it does now. Judy grew up in Riverside and Art in Glocester. But their families’ social lives revolved around grange halls (while grange halls still exist today, they played a more central civic function in the 1940s and ‘50s). 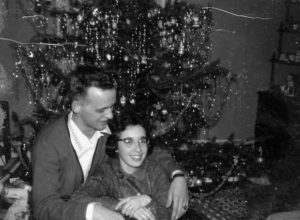 Art and Judy met at a grange youth conference when they were 16 years old and dated on and off for the next few years, before marrying in 1963. Their son, Andy, came along soon after and the young family settled in East Greenwich in 1965.

By then, Judy was teaching at Hanaford. She moved over to Meadowbrook when that school opened in 1970. Art worked in a variety of jobs over the years, mainly in sales.

Art had always enjoyed painting but began painting in earnest after he retired. His scenes of East Greenwich have been featured in art shows at the library and he’s sold his work during Main Street Strolls. Art also became an avid cyclist, completing the MS 150 three times. More recently, he was a member of the “Old Spokes” cycling group.

They both love East Greenwich.

Judy and Art laugh easily together and, Judy says, they help each other a lot. If one isn’t feeling well, the other will make dinner.

Differences remain. For instance, Art loves city life and Judy prefers the country. But maybe those differences are the glue that binds them together.

“We don’t try to live each other’s life,” said Art.

This is one in a series of East Greenwich love stories we will be featuring during February in conjunction with our February matching donation drive. Find out more about the drive here. And, if you have a love story you’d like to share – anything from a story about best friends or a child and their pet to love of a special place or business in East Greenwich – email [email protected].