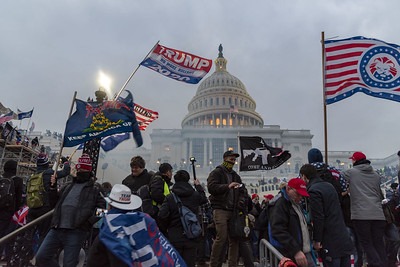 The two state senators and one representative who represent East Greenwich in the Rhode Island General Assembly all voiced support for a resolution calling for President Donald Trump to be removed from office.

On Tuesday, the Rhode Island State Senate overwhelmingly approved a resolution condemning the storming of the U.S. Capitol last week, in which a mob of President Trump supporters attempted to disrupt Congress’s certification of the presidential election results. Five people died in the riot. The resolution called for Trump to be removed from office through either the 25th Amendment or congressional impeachment, claiming that his rhetoric and refusal to concede incited the violence. The Rhode Island House of Representatives will vote on the measure next Tuesday.

“The strength of America’s democracy is in our ability to come together during times of strife and peril,” the resolution’s text read. “The day of calculated destruction will not change our destiny or our confidence that there are brighter days ahead.”

State Senators Leonidas Raptakis and Bridget Valverde, Democrats representing District 33 and District 35, respectively, both supported the resolution. They both argued that Trump played an active role in inciting violence by denying the election results and encouraging supporters to work to overturn them.

“[Trump is] operating out of an authoritarian playbook,” Raptakis said. “The events and his reactions were unacceptable and it’s sad to see this. It’s unpresidential, number one, and to not even recognize the election of Joe Biden, it’s appalling to the respect of the U.S. Constitution and our democracy. Nobody would have expected the actions of Trump to venture down that path. It’s a tragedy in American history that future Americans will look at as one of the darkest hours in U.S. history.”

District 30 Rep. Justine Caldwell, also a Democrat, plans to support the resolution in the House next week. She explained that as elected officiasl, she and her peers take their positions of power seriously, but she feels that Trump and other politicians have not respected their offices.

“There’s no question Trump had a huge role in inciting these riots as well as some other Republicans in Congress,” Caldwell said. “I don’t believe they should be able to keep their seats, and I think it’s important to take a stand when things like this happen and be on the right side of history.”

State Rep. Justin Price, a Republican representing District 39 in Richmond, Hopkinton and Exeter, has received criticism and calls to resign due to his attendance at the protest. Price said on his Twitter account that he marched to the capitol with “1 million peaceful patriots,” but claimed that Black Lives Matter and Antifa activists infiltrated the protest and made it violent. There is no evidence that either of these groups were involved in the capitol siege. No evidence has yet surfaced that Price was among those who stormed the capitol.

Caldwell said Price has refused to wear a face mask in the chamber during the COVID-19 pandemic, which greatly concerns her. Caldwell argued that Price, who serves on the powerful Finance Committee, is hurting his constituents through falsehoods regarding the coronavirus and elections.

“Though I find it a very unlikely possibility, I think that Rep. Price should resign,” Caldwell said. “Not only did he attend that rally as he refers to it, he claimed afterwards that it was Antifa who actually broke into the capital. I don’t think he has a connection to reality that serves his constituents.”

Valverde and Raptakis were critical of Price’s involvement in the march, but said that the House of Representatives should decide his fate.

Nothing but congratulations for Raimondo, McKee

“We’re really proud of Gov. Raimondo for the work she’s done in Rhode Island and that she’s been recognized as a national leader,” Valverde said. “I look forward to working with [Lt. Gov. Dan McKee] and getting to know him and his priorities. I’m hopeful the transition will go smoothly, we really need that right now especially.”

If Raimondo is confirmed, McKee will serve as governor.

According to Caldwell, McKee met with Rhode Island House Speaker Joe Shekarchi and Senate Majority Leader Dominick Ruggerio this weekend. She said she was glad that McKee plans to keep much of Raimondo’s COVID-19 response team in place.

Raptakis was also optimistic regarding McKee.

“I think Dan McKee’s going to be a great governor,” Raptakis said. “He’s been elected twice as lieutenant governor and he’s done a great job for small businesses. There’s a lot of important small businesses in East Greenwich, and it’s the backbone of Main Street. He’s done a very good job of pushing for loans from the Department of Commerce.”

Going into her second term as a state representative, Caldwell hopes to pass bills banning the sale of assault weapons and banning high capacity magazines. She also wishes to sponsor legislation to help special education students get more services, since she has heard from parents that many of these students have struggled during distance learning.

“I have some more optimism about [these bills’] passage with the new leadership in the House than I did previously,” Caldwell said. She was referring to the new House’s new speaker, Joe Shekarchi.

Valverde, who is also entering her second term in the General Assembly, has a legislative agenda that includes sponsoring a bill to remove the ban on state health insurance from covering abortion, as well as a bottle bill to increase recycling in the state. She said that two of her biggest priorities overall are creating affordable health care and housing opportunities.

Raptakis has represented District 33 since 2013 but previously held the seat from 2003 to 2011. Prior to that, he represented District 20 in the Senate, and District 31 in the House. Raptakis spoke about potentially raising the state’s minimum wage, but he was concerned that raising it too much would result in businesses moving out-of-state due to a higher cost of employment. He also said a sudden raise could cause a rise in prices.

“I’ve been pushing for a study commission to find out what should be the minimum wage in Rhode Island,” Raptakis said. “We’d invite small businesses, invite unions. Let’s get the facts. We’re not Massachusetts, not Connecticut, not New Hampshire. I think jumping to $15 an hour would be a huge jump. Let’s tailor a minimum wage. A minimum wage is not a living wage. We can’t pay a 16 year old with no experience $15 an hour.”