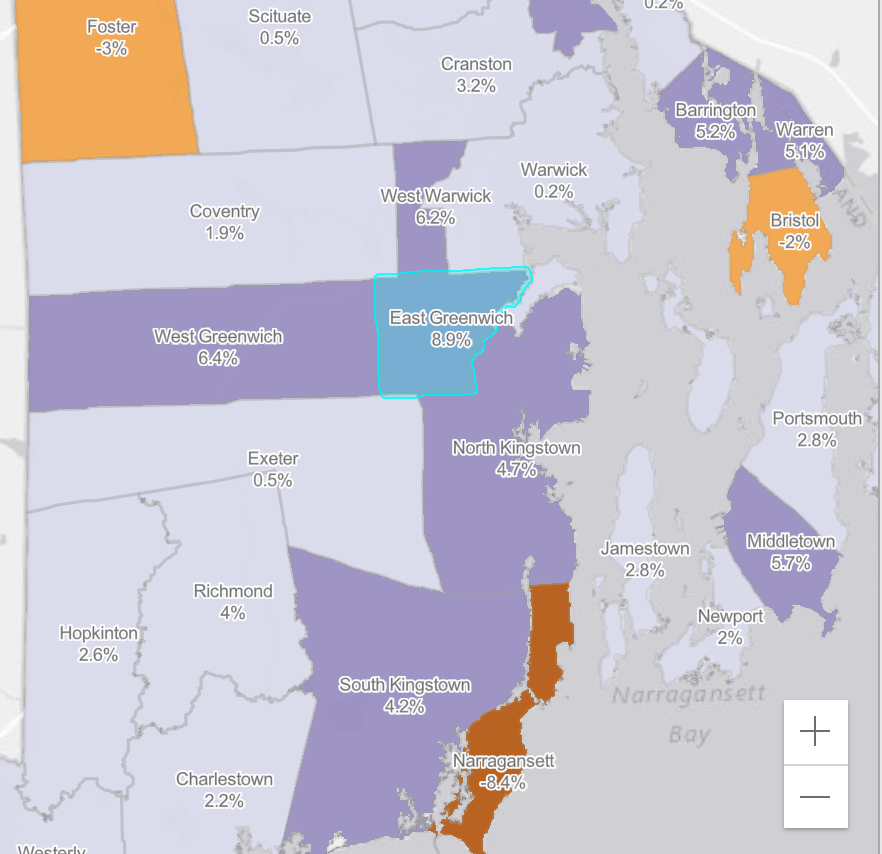 Statewide, Block Island had the biggest jump in population (34.2 percent), with Central Falls next (16.6 percent), then EG, followed by Cumberland (8.7 percent) and Providence (7.2 percent).

The state as a whole grew too (by 4.26 percent) – enough so that Rhode Island will retain two Congressional seats, a welcome surprise to many state officials. (You can find all the data on the state’s data hub HERE.)

While the state overall dropped from 76 percent to 69 percent “non-Hispanic white,” as the census says, East Greenwich is still largely white – 84.7 percent. That’s down from 91.9 percent in 2010. We didn’t “lose” white residents (we actually gained 41 white residents) but we gained other categories at higher rates. Non-Hispanic Asians, Hispanic/Latinos and non-Hispanic/2 or more races made the largest gains; the number of non-Hispanic Black residents increased slightly as well. Find the data below:

Town Planner Lisa Bourbonnais said she was not surprised by the new data.

“There will be people who are surprised but I think that we in this department are not,” said Bourbonnais, referring to the town’s Planning Department. They have been working on updating the impact fee structure and part of the work done by consultants had to do with population projections.

Bourbonnais said there is more data to come – on income, for instance. But with at least two larger-scale projects not yet occupied – 96 units on South County Trail and 68 units on Main Street just north of the Greenwich Village complex – as well as a number of smaller unit-count projects, it seems in the short term anyway, East Greenwich will continue to see growth.

Here’s the history of population in East Greenwich from 1800, from the state’s data hub: