EG Has ‘Long Way to Go’ to Fight Systemic Racism 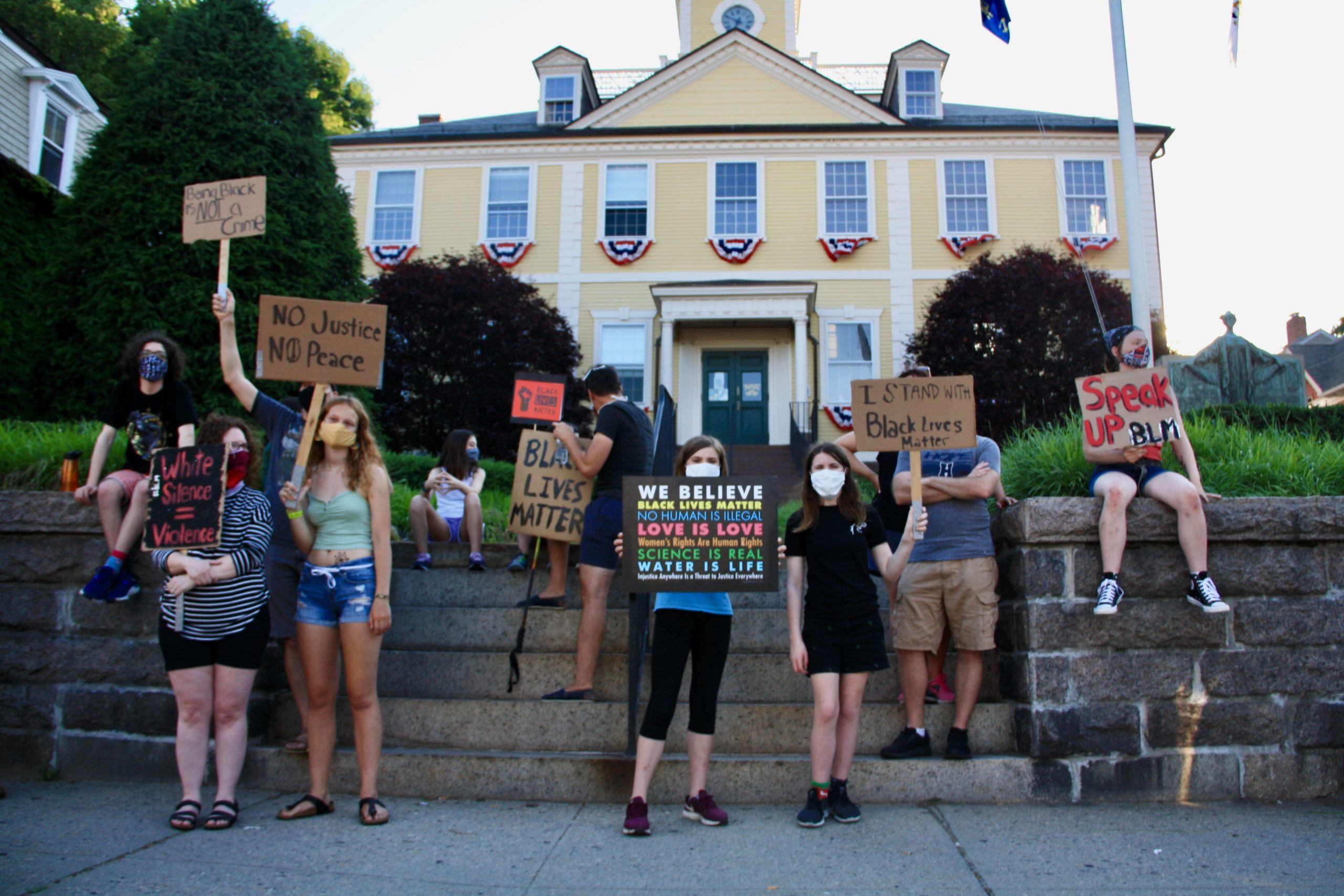 The Town Council got an update last week on efforts the town making to address systemic racism, including in the police department.

This follows three local demonstrations last June in response to the deaths of George Floyd in Minneapolis, Breonna Taylor in Louisville, Ky., and numerous other Black Americans’ at the hands of police over the years.

Protesters on First Avenue during a silent vigil for George Floyd in June.

Last year, the East Greenwich Police Department and 47 other police departments across the state signed the “20 for 2020” pledge, which lists 20 principles that police departments need to uphold to combat systemic racism. Among the principles are the addition of body and cruiser cameras, implicit bias training, and a commitment to diverse hiring.

“It’s not an initiative that has a beginning and an end, it’s one that just continues,” Town Manager Andy Nota said at the Town Council’s Jan. 25 virtual meeting. “And I think what I can say to you this evening is that we have an awfully long way to go. So I’m not really here tonight to report out that we’ve accomplished something – a fait accompli and we’re wrapping up our efforts. You know I think we’ve really only just started to scratch the surface.”

Police Chief Stephen Brown reviewed seven aspects of the pledge the department is working on. The first, transparency and public concerns, was addressed by adding a transparency tab to the police website. This includes the police’s use of force policy and a way to easily file complaints or concerns regarding police. The next item, adding body cameras, is waiting on the Rhode Island Police Chiefs Association securing a vendor for a statewide bid for the cameras. The Rhode Island Attorney General’s Office is also working to find a way to fund the program.

“The department is excited and ready to implement this program,” Brown said after the meeting.

Brown said he was optimistic the department will reach the third item, full accreditation under the Rhode Island In-State Accreditation Commission, this year. The idea behind accreditation is to align practices and procedures with national standards. For the EGPD, it’s been a several-years’ effort.

Brown said he’s also looking to bring in speakers from outside, as has been done in the past with the help of Substance Abuse Coordinator Bob Houghtaling, who past programs for the police included the topics of non-violence and race.

Finally, Chief Brown noted the statewide task force’s recommendations for changes to the state’s Law Enforcement Officers’ Bill of Rights. The Bill of Rights law protects officers accused of misconduct, sometimes making it hard to fire a rogue officer even after repeated incidents of misconduct. It also allows an officer’s employment to be determined by a panel of current or former police officers. Brown said that the task force has issued its recommendations to the General Assembly, which could lead to changes in the law.

Bob Houghtaling also addressed the council Jan. 25. According to the U.S. Census Bureau, nearly 90 percent of East Greenwich residents identify as white, a point Houghtaling emphasized. He added there were other groups of residents to consider in addition to racial minorities, including people with disabilities, people living in poverty and LGBTQ+ people. Over the years, he said, various people and organizations have worked to highlight and solve problems faced by minority groups.

“We have some good pieces, but I think again like Town Manager Nota was saying, we have a lot of work to do, we have some holes in our game,” Houghtaling said. “But I think that we’re going into decent directions – at the very least we’re willing to talk about it, starting that discussion and do some soul-searching and reflection.”

During public comment on the issue, resident Nicole Bucka said many victims of police brutality had intersectional identities – they belonged to multiple marginalized groups. For example, Bucka said, many victims were Black as well as low-income, or they had a disability that impacted how officers interpreted their behavior. She added that, as a white person, she’d never had to think critically about her race until recently, when she undertook an “anti-racist challenge.”

“There’s no Black person that doesn’t know what it means to be Black,” Bucka said. “And these are the kinds of ‘aha’ moments I had in this challenge that have really helped me…. Regardless of what programs and relationships and one-hour trainings we might have for our police and anybody in our community, if we don’t look inward first, if we don’t first recognize what ethnicities and identities and races and abilities we represent, then we really can’t do better by other people.”

Johann Patlak, who organized one of the Black Lives Matter protests in East Greenwich last summer, said that ultimately the town needs to consider the historical origins of racial inequity in order to move forward.

“People are saying that the diversity we have here is along many lines but not so much along matters of race,” Patlak said. “So the question is, is that truly an accident or is that a coincidence or other historic structural reasons why East Greenwich looks different from Warwick and Cranston and Providence? And I think it behooves the town as an entity to look into what those reasons are and whether there are things that the town can do now today to offset some of those historic drivers of inequity.”

This story has been amended since it originally posted.