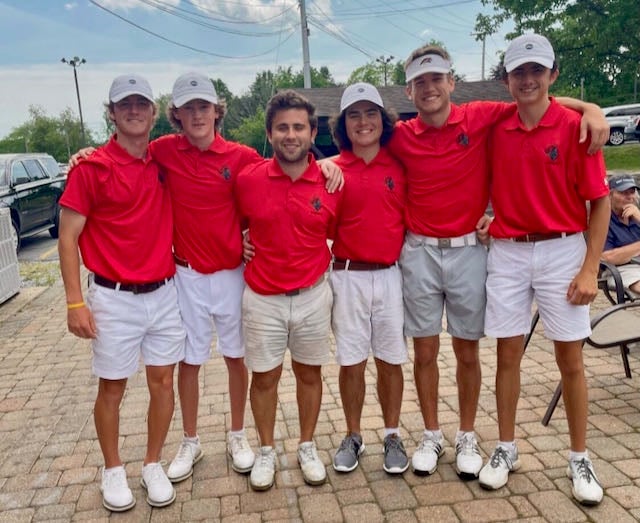 In the lead by a point after the first day of the state golf tournament, EG’s hopes were riding very high going into Day 2 of the state tournament. It’s been nearly 30 years since the Avengers captured a state title (in 1993) and this looked like it could be the year.

But EG lost by six points to perennial rival Bishop Hendricken, a team they had beaten in the regular season.

“Obviously I cannot be too displeased with a second-place finish, but gutted for the boys overall,” said Coach Marc Brocato via email. “I think they were a little disappointed with the Day 2 play.”

“We gave it our all,” said team Captain Mike Quattromani. “Hendricken had a great [second] day. They just looked like the better prepared team.”

Quattromani said it was almost easier to lose by 6 points instead of just one, “because then there would have been a lot of second guessing.”

He noted EGHS was the only public school to finish in the top five.

All three of the team’s seniors – Quattromani, Jake Barron and Jack McMullen – scored for the team, with McMullen scoring both days (with back-to-back 74s). That detail is particularly remarkable because this was McMullen’s first match with the EG team. He was on the EG Football team, which played in the early spring because of COVID concerns last fall.

“I really thought this was the group that could get it done because they prepared well, took on so many challenges, and truly were not afraid of the moment,” Brocato said. “But, as sports can be, there are no guarantees. They did everything they possibly could do and just came up a little short. It’s ultimately about the journey and the process, and theirs was perfect in every way. Next time in that position, they will be a little more comfortable and it might make the difference between first and second.”