After a first-game loss against New Jersey Saturday, the East Greenwich U-12 Girls Softball team has found their groove. First, they beat Vermont, 12-1, on Sunday. (Find the write up of those first two games here.) Then the girls bested Delaware, 6-3, on Monday, and dominated Massachusetts, 11-1, Tuesday to make it to the semifinals Wednesday.

Against Delaware, the EG girls fell behind early. From two singles and a walk, the Delaware team took an early 2-0 lead in the first inning.

Delaware then tacked on another run in the third, slamming a triple into right field and stealing home on a wild pitch to widen their lead to 3-0.

At that point, EG’s bats came alive. Brooke Fairbanks led EG off in the top of the 4th with a single, and then, with two outs, Teaghan Bristol drilled a line drive into right field for a triple, as well as the first RI score. After that, another single by Layla Cameron brought Teaghan home, making the score 3-2.

This score necessitated a strong defensive performance, and pitcher Ava Fairbanks delivered. By striking out two and forcing a ground-out in the bottom of the fourth, Fairbanks retired the Delaware side. 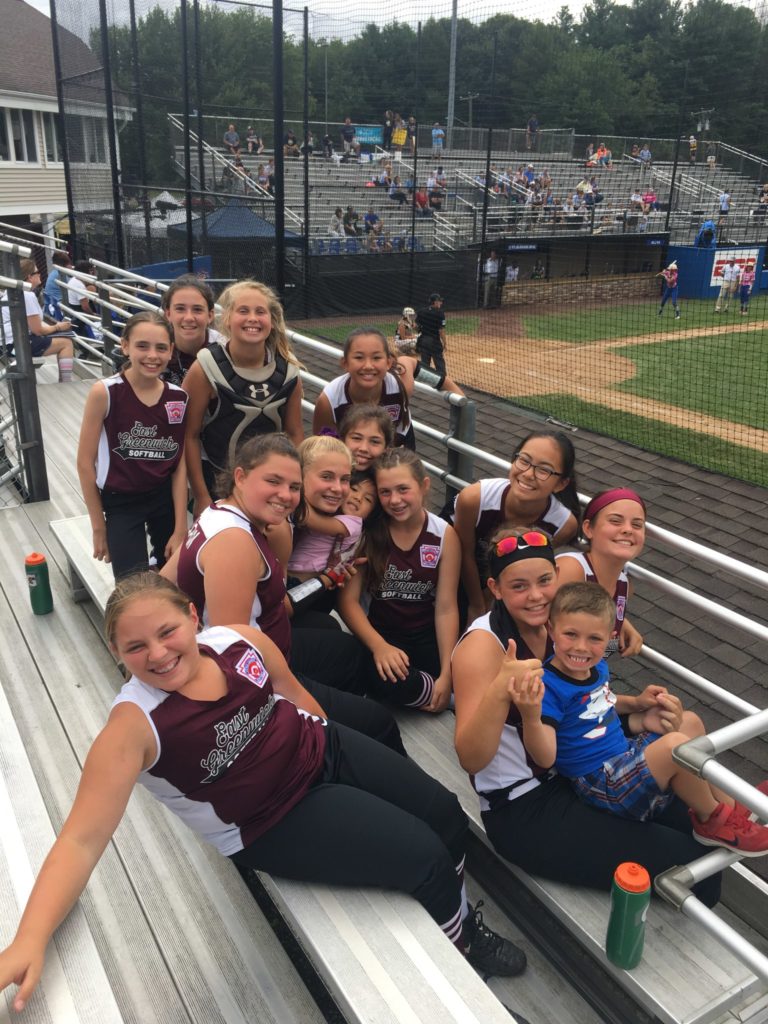 The EG Girls U12 softball team takes a break during regionals in Bristol, Conn.

In the fifth, EG finally took the lead. Emma Manzo led off the inning with a single. That single, combined with Ava Fairbank’s, put EG in position to take the lead. With another single by Margaret Neville, EG did just that, as both Ava and Emma crossed the plate. Another pair of singles by Brooke Fairbanks and Alivia Ring helped widen the lead to 6-3.

Ava Fairbanks struck out three in the bottom of the sixth to put the game away, cementing Rhode Island’s second win of the tournament.

Following this win, the EG girls took on Massachusetts, a perennial powerhouse. The stakes were familiar for this EG team: win or go home.

Massachusetts struck early, a pair of singles notching them a run on the scoreboard. However, the EG girls were unfazed. That same inning, Margaret Neville stole home on a wild pitch to score Rhode Island’s first run of the game. Then, her sister Cat hit a single, driving in Brooke Fairbanks as well. With that run, the EG girls captured the lead, 2-1.

From then on, the EG girls dominated, both in the field and at bat. Though unable to score in the second inning, the EG girls piled on two more, beginning with a double by Brooke Fairbanks and a single by Teaghan Bristol, in the third. Then, a series of walks brought both Brooke and Teaghan home for EG’s third and fourth runs, respectively.

in the bottom of the 5th inning, the EG girls went on a tear. Walks for both Sachi Chan and Emma Manzo placed runners on base, and then a single by Ava Fairbanks drove in Sachi. Margaret Fairbanks then drilled another single, driving in both Emma and her sister, Ava.

Four consecutive walks, a single by Layla Cameron, and another walk drove in the eleventh and final run of the game. Because of mercy rule, the game was prematurely ended. The final score was 11-1.

The team faces New Jersey, the team that handed them that first-game loss, in the regional semi-finals Wednesday at 1 p.m. Catch the action on ESPN+.