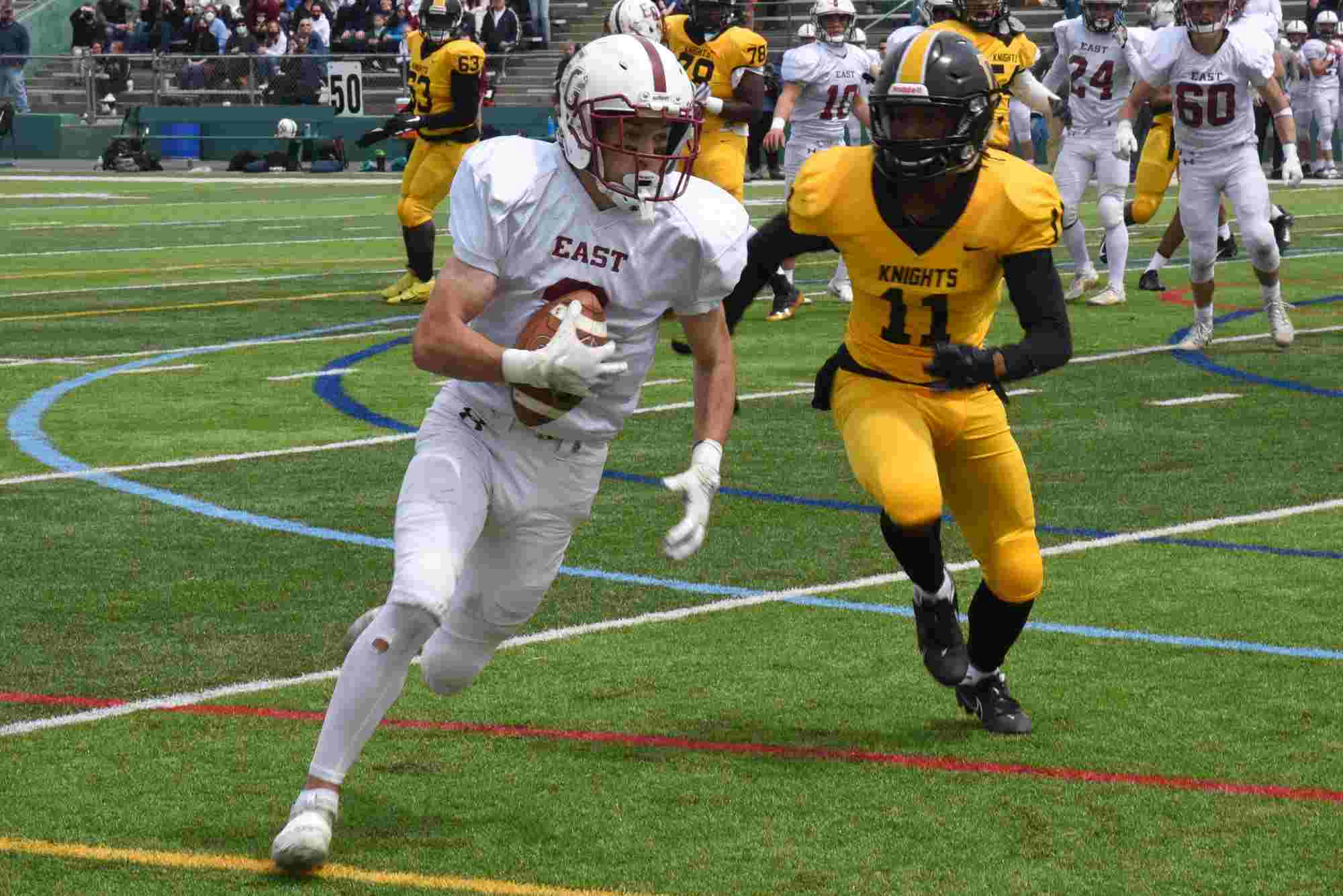 The team loses to Central in the D1 state championship, 13-12

In their first visit to the Division 1 Super Bowl in their first year in that division, the East Greenwich Avengers made a heroic effort that fell just short against the Central High School Knights, losing 13-12 at the Cranston Stadium.

The game started on a high note for the Avengers when EG appeared to take a lead on a 40-yard touchdown run by Jonah Hill around the left end. Unfortunately, the play came back as a result of a holding penalty. The drive subsequently stalled with an interception of a long Parke Hardesky pass that essentially acted as a punt on third down. The teams then traded abbreviated drives in what was beginning to look like a defensive struggle.
Central began its first scoring drive with an interception by Central linebacker Prince Kweh. E.G quarterback Parke Hardesky delayed a touchdown when he shoved Kweh out of bounds at the Avenger 20-yard line. It looked like the E.G. defense would escape when they stopped the run on third down but Central converted with a quarterback keeper on 4th down to give them a first-and-goal from the 8-yard line. Senior fullback Eber Jallah carried the ball around left end for the first Central touchdown with 1:14 remaining in the first quarter. Their conversion attempt failed.

East Greenwich would respond by literally stealing the ball back on an interception by Jonah Hill where he fought Central receiver Ranado McCay for the ball at the E.G. 39. With 9:28 remaining in the half Hardesky hit receiver Andrew Plympton in stride for a 15-yard gain followed by a short run by Jonah Hill and a nifty jump pass to tight end Tim Votta on 4th and 3, which left the Avengers with a 1st and 10 at the Central 17. After a Central illegal hands-to-the-face penalty put the ball on the 8-yard line, Hardesky targeted Jack McMullen who made a spectacular one-handed grab and came down inside the pylon for an East Greenwich touchdown. In what would come back to haunt the Avengers later, the kick failed and the score was tied 6-6.

Central responded immediately with a sustained drive behind their massive offensive line.  Running backs McCay, Jallah, and Emmanuel Kayee took turns running mostly around end, breaking off large chunks of yards. Eventually, Kayee ran around the right end for an 11-yard touchdown. This time, the Knights kicked the extra point and took a 13-6 lead into the locker room.

In the second half the East Greenwich defense came up big early, forcing Central to punt from their own 8. A fumble on the return resulted in Central keeping the ball and the Avenger offense off the field. Later in the second half the E.G. defense caused Central to turn the ball over on downs inside the E.G. 20-yard line with 10:42 in the fourth. The teams then held tough until East Greenwich started what was almost a magical finish after Central missed what would have been a 22-yard field goal with 4:35 left remaining in the game.

Hardesky and the Avengers started the drive at their own 20 after the missed field goal. After Hardesky completed a 6-yard pass to Andrew Plympton,  Jack McMullen made a spectacular one-handed grab at the 50 and tacked on 5 more after the catch. After a short pass to Chad Coppola to the 32, Parke Hardesky executed a perfect quarterback draw which ended in a late hit by Central and placement on the 9-yard line. After three unsuccessful runs the Avenger were left with a 4th and goal from the 5. After dueling timeouts, Hardesky found Plympton in the end zone to bring the score to 13-12 Central. Coach George opted to go for the win with the 2-point play but Jack McMullen was stopped just short of the goal line.

Although the Avengers did get the ball back with 1.8 seconds remaining Hardesky was unable to connect with Aydin Kocak in the end zone and the flag for interference that the E.G. faithful desired was not thrown, resulting in the 13-12 final and Central celebrating its first championship since it won the 1992 Division 3 Championship. 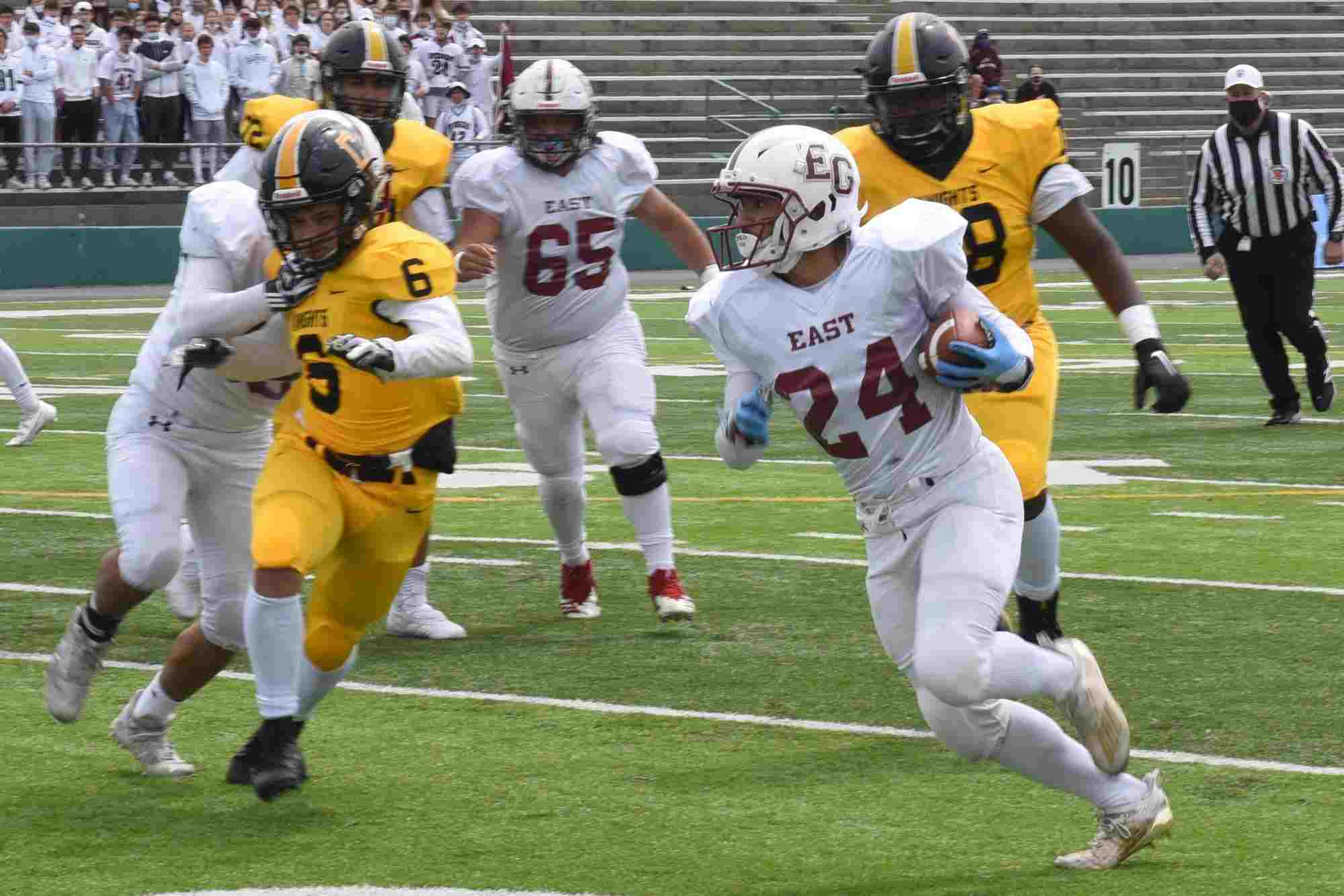 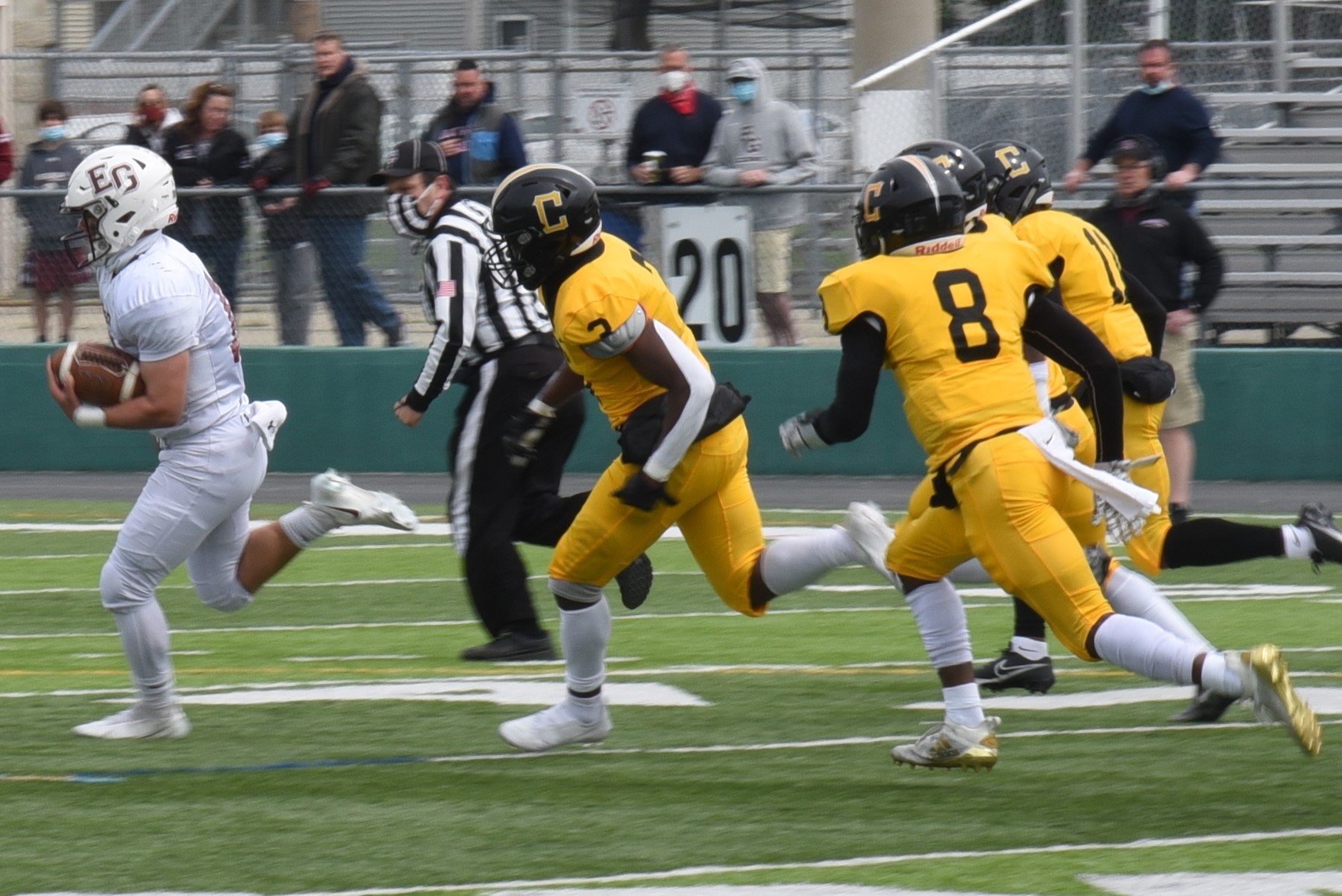 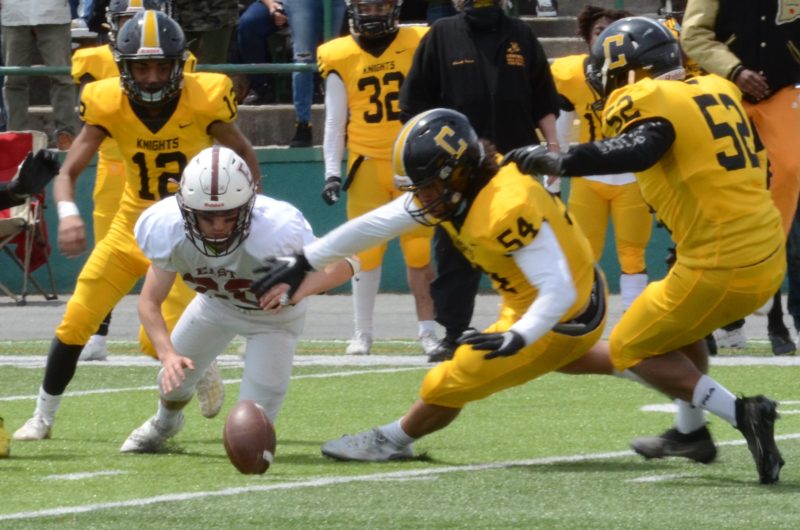 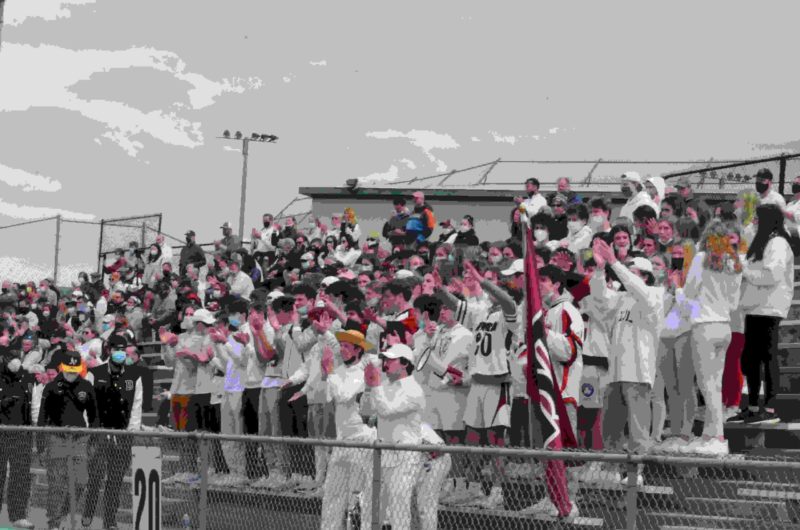 EG fans on their feet at Cranston Stadium.