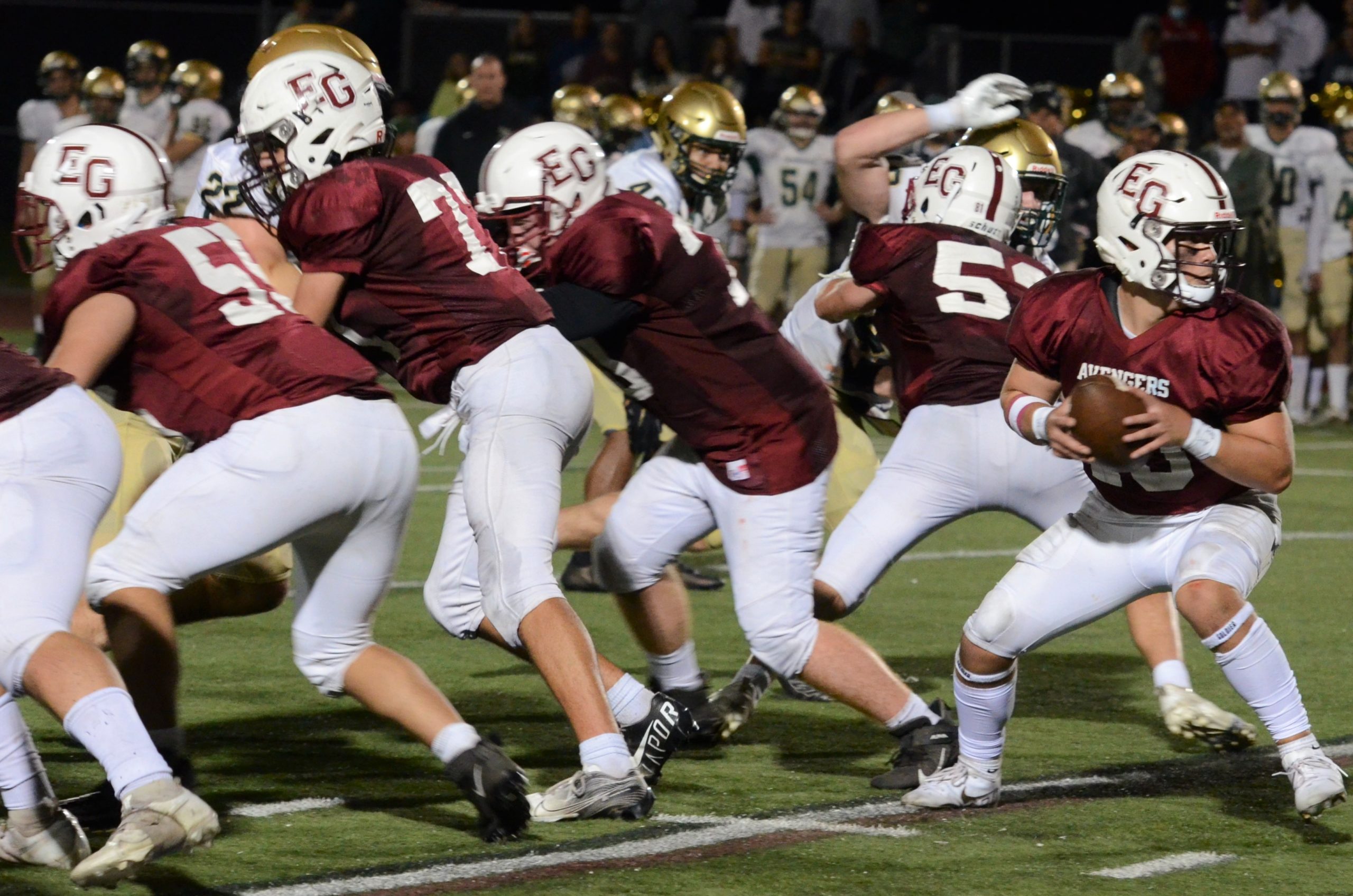 For the last 11 years the Bishop Hendricken Hawks have been the yardstick by which all other Rhode Island Interscholastic football teams have been measured. The East Greenwich Avengers had their opportunity to compare last night at Carcieri field and came out knowing they still have a way to go. Hendricken is big. Hendricken is strong. Hendricken is fast. Despite numerous miscues and personal fouls, the Hawks overwhelmed the Avengers to prevail 42-7.

The evening began with a bit of optimism as quarterback Parke Hardesky connected with Chad Coppola to the 49. Unfortunately, Coppolla injured his leg on the play and would not return. The Avengers continue to drive the ball to the Hendricken 15 with a quarterback draw by Hardesky, short passes to Tim Pavilonis and Jack Farrelly, and a roughing-the-passer penalty. The drive ended with an interception in the end zone by Hawk’s corner Peter Bibby.

The Hawks marched methodically down field with a drive that included a 35-yard strike from quarterback David Lynch to Andrew Noland and ended with a 5-yard scamper by Brandyn Durand. That made it 7-0 and the Hawks never looked back. The Hawks scored on a Lynch keeper from the 9-yard line with 3:06 left and then another short run by Durand to make it 21-0 with 10:08 in the second quarter. The Avneger’s Ryan Sheerer slowed the rampage when he intercepted Lynch’s pass to the end zone.

The reprieve was short lived, however, as Hendricken partially blocked the E.G. punt on the ensuing possession and recovered at the E.G. 26 yard line. Hendricken’s Teighan Jeremy ran it in from the 4 yard line to put Hendricken up 28-0 with 3:52 left. E.G. again went three and out on the following possession but had issues once more on the punt resulting in Hendricken receiving the ball at the E.G. 15. The time expired in the first half without another Hawk score.

The Hawks switched quarterbacks for the second half with first Avani Rodrigues and then Jayden Falcone taking the reins. Although the Hawks were able to push the ball down field, the first drive ended in a fumbler and the second drive stalled, resulting in an attempted field goal.  The Avengers were able to block the kick and Cade Thomas returned it to the EG 35 yard line.  Hardesky then connected with Jack Farrelly for a long completion to the Hendricken 10 and then the pair connected again for the Avenger’s lone touchdown with 9:08 in the game to make it 28-7.

The Hawks went almost exclusively to the ground for the remainder of the game. Ronjai Francis had a number of chunk plays resulting in a keeper by Avani Rodrigues with 5:15 left and then Jayden Falcone ran it 85 yards for the final score with 1 minute  remaining.

Although the Avengers fought until the end, they were playing a much bigger and faster team.  Hardesky was under attack all night and even with a game plan that featured a short crisp passing attack, it was hard to get in sync. Coupled with an inability to establish any type of meaningful  running attack because of the size of the Hendricken defensive front, the Avengers needed a near perfect game to compete. It doesn’t get much easier for the Avengers as they face Woonsocket at 7 p.m. next Friday. 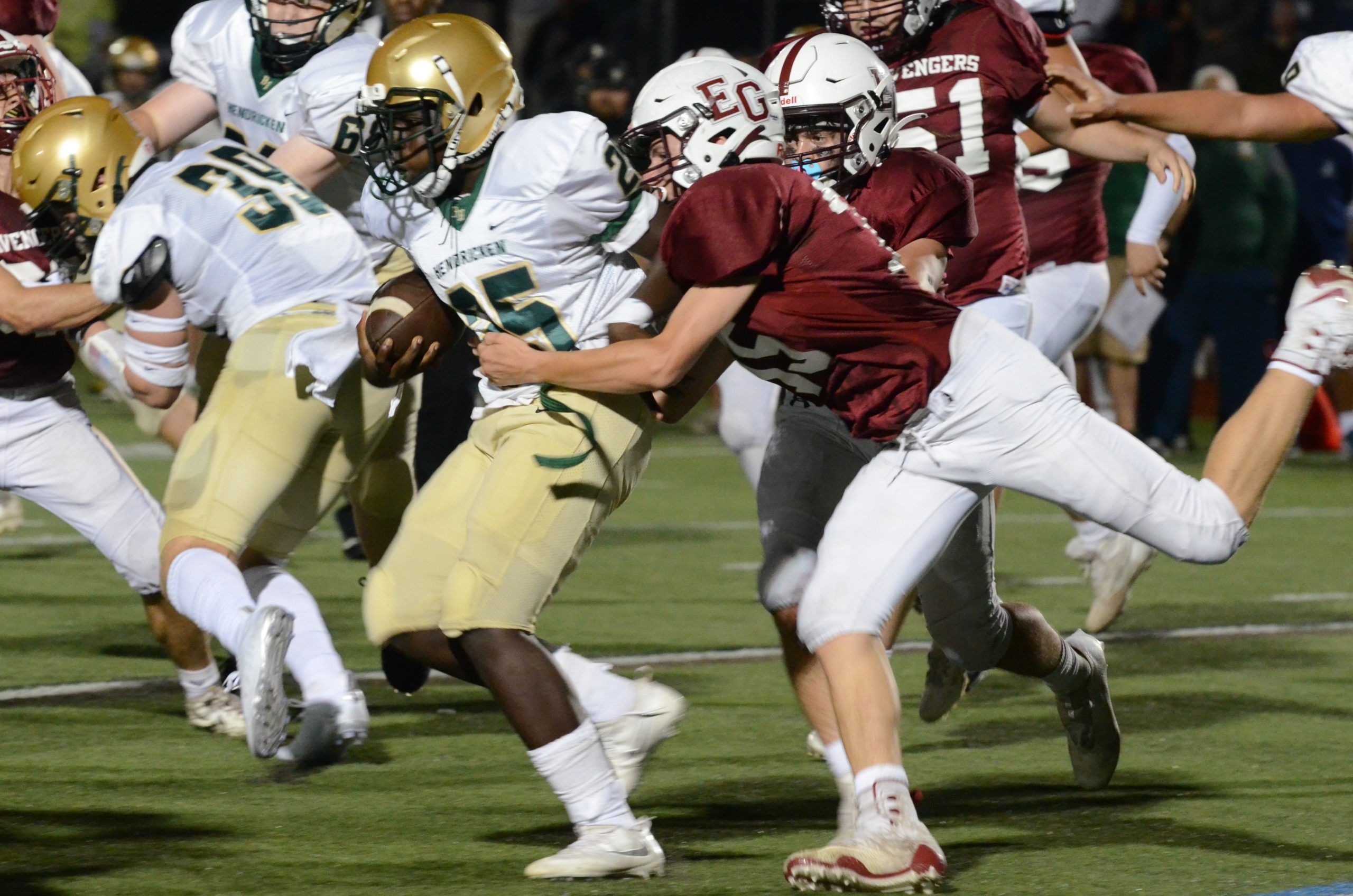 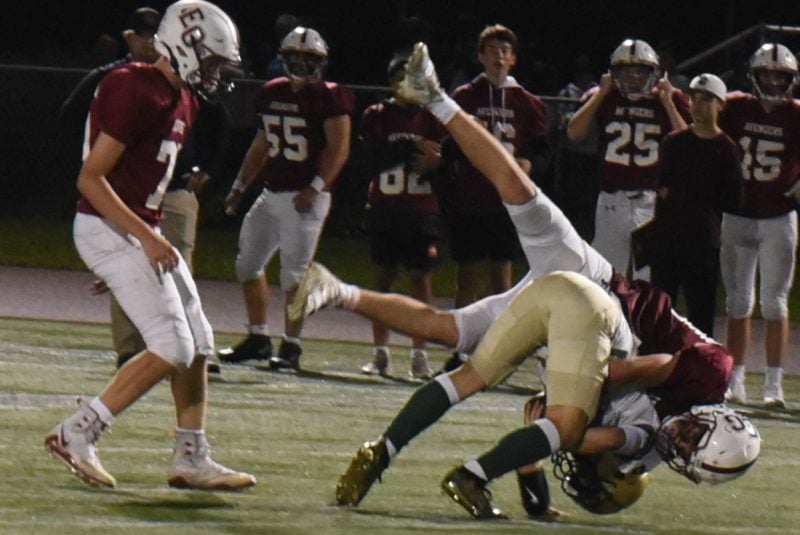 Leap by Jack Farrelly (7) results in only Avenger touchdown. Photo by Mary MacIntosh