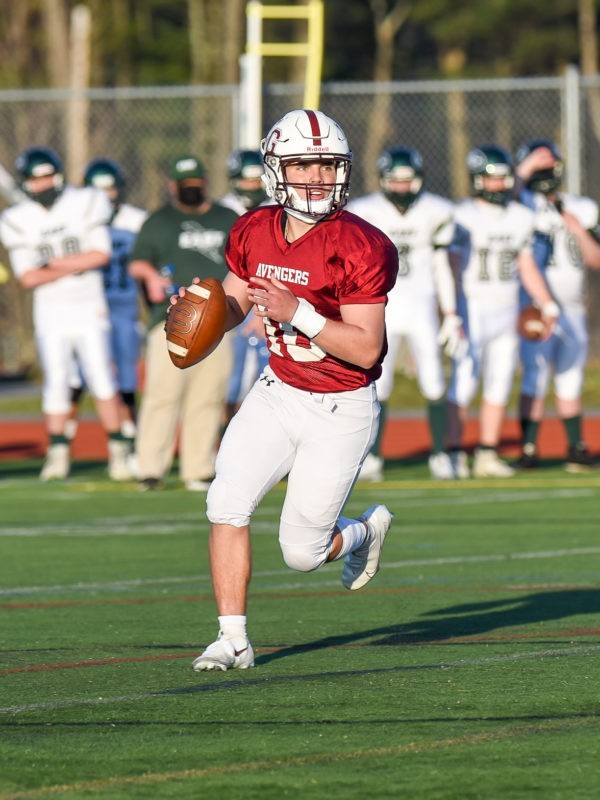 Photos by Chuck Nadeau. Find all his photos at chuckn.com.

The Avengers had no problem finding their footing for a spring season, if their first outing is any indication – they rolled past the Cranston East Thunderbolts 37-0 in the season-opener at Carcieri Field Friday as well as their debut in Division I.

New starting quarterback Parke Hardesky, a junior, took to the role easily, throwing four touchdown passes; he threw a total of 167 yards. Among his targets were Jack Mullen and Andrew Plympton in the first half and Chad Coppola and Tim Votta in the second. Jonah Hill also scored for EG, with a 9-yard touchdown run in the first quarter.

“Parke played very well in his first and the protection he got from the offensive line was excellent,” said Coach John George. “We played really well on both sides of the ball. I was very pleased with our effort and our execution.”

McMullen also scored a field goal for the Avengers, as well as extra points for four out of the five touchdowns.

EG’s next game is Friday, against Cranston West, away. Full stats here: EG vs. Cranston East 3/26/21.

Running for a touchdown.