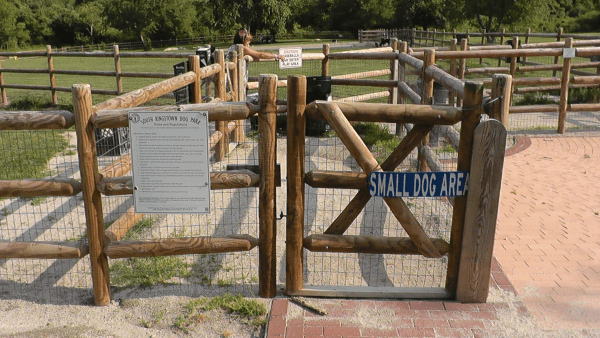 The South Kingstown Dog Park, which has separate sections for small and large dogs.
Resident Steve Bartlett thinks it’s time for East Greenwich to have its own dog park, a place where dog owners can bring their dogs to run free and frolic with other dogs. Warwick has one. North Kingstown has one. Coventry it in the process of getting one. It’s time, he says.
He started his campaign earlier this year, in hopes the Town Council would budget some money for the project. But the council was not ready to pay for a dog park, at an estimated cost of $8,000 to $10,000, according to Bartlett.
Instead, Town Council President Michael Isaacs said the town would be willing to let a dog park be built on a parcel of town-owned land where it made sense. And there are a number of smaller, town-owned parcels located all over the town.
One of the first that was mentioned for a dog park was Scalloptown Park, which has become a default “dog park” for some dog owners already. But that’s not possible, according to Joe Duarte, head of Public Works. Scalloptown Park sits on top of the old town dump. It was capped in 2010 and one of the restrictions is that the barrier layer between the surface and the dump cannot be penetrated. So, no fencing could be set up there.
Then there’s the rarely-used exercise course next to Franklin Road, at the entrance of the River Farm neighborhood. But it sits on the Hunt River Aquifer – lots of dog droppings would be a no-no. There’s a pick-up-after-your-dog law, but …
“I believe that if the town would identify a site and propose it to the Town, we would have no trouble raising the money to build it,” Bartlett wrote to supporters last week. The next step is for dog park supporters to meet with Town Manager Tom Coyle and other town staff to discuss sites.
If you are interested in learning more or helping out, contact Steve Bartlett at [email protected]
Sign up for the EG News newsletter  here. You can like us on Facebook  here, or follow us on Twitter (@egreenwichnews)  here.