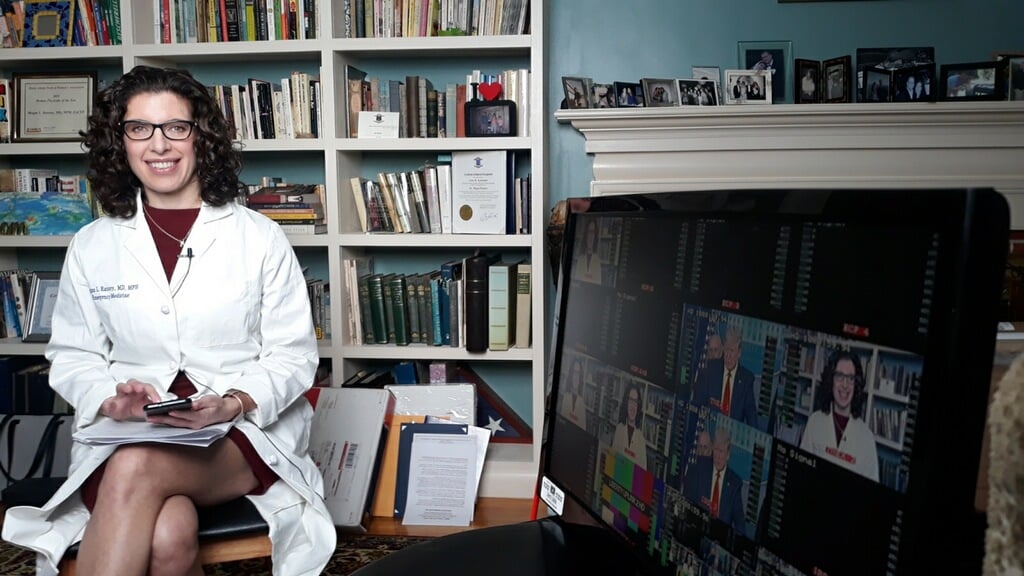 Above: Megan Ranney has been interviewed on several national news programs … all from her East Greenwich living room.

East Greenwich, R.I. – Megan Ranney had already become a national figure before the coronavirus, social distancing, and a world shutdown. As an ER doctor at Rhode Island Hospital, she’d seen first hand the carnage guns can cause and she began to speak out about the need to consider guns as a public health issue.

But when the COVID-19 pandemic crashed into the United States and it became clear the country didn’t have enough masks, gloves, gowns and face shields for health care workers – enough personal protective equipment, or PPE – Ranney realized she needed to speak up.

“My colleagues and my hospital needed me,” she said. Lifespan, which owns RIH, has been proactive compared to other hospital systems, said Ranney, but with nearly every country in the world looking for supplies, it’s a battle.

“We do not have great resources to replenish supplies. We’re actively looking to identify sources and doing our best to conserve what we have,” she said.

This is not the norm for hospitals, where reuse and recycle have traditionally been dirty words. But in many hospitals today, health care workers are told to use one mask for an entire shift or even for days.

“Usually it would all be disposable,” Ranney said. “That’s just not the reality in the U.S. right now.”

Signs left in the Ranneys front yard, thanking Megan Ranney for her work.

The urgent issue of not enough PPE galvanized Ranney and others – including Shuhan He, a doctor at Massachusetts General Hospital – to found GetUsPPE.org last month (actually just three weeks ago). Ranney played a key role, recruiting Brown students to get an online petition up and running. Already, GetUsPPE.org has become a national grassroots effort to match donors and sources of PPE with health care workers. Find out more HERE.

Ranney has become one of the faces of the organization, appearing on national news programs and news websites.

When EG News caught up with Ranney recently, she was walking in her neighborhood, her first time outside in days, she said. She has been working as much as 18 to 20 hours some days.

Ranney’s grateful for her husband, Chuck Ranney, who works from home and is able to be there with their two school-age children when she’s at the hospital.

“I’ve got a great husband,” she said. He’s even been able to help out with Ranney’s TV appearances. With everyone at home, many people are interviewed via Skype, but Chuck owns a TV broadcast services company, allowing him to set up a home studio for his wife’s appearances.

Like every other families of K-12 students in Rhode Island, the Ranneys are dealing with the challenges of distance learning. So far, things have been positive. Ranney recalled the first day of distance learning, when her son’s Meadowbrook teacher was on the computer at 9:30 a.m. “Watching these kids’ faces light up as they did their morning character pledge” was inspiring, she said.

Usually a fan of limits on social media, Ranney sees it has a big role in this moment helping children stay connected.

Her children have been able to continue activities like theater classes and gymnastics virtually.

“I think it’s things like that that help. It’s also us as parents holding strong.”

She’d heard about a Zoom Bingo night – “We’re finding new ways to do this.”

She said she tells her children, who are going pretty stir crazy, that by staying home now they will be able to get back to school sooner.

As for what we here in East Greenwich can do to help, Ranney’s answer is simple: “Stay at home.”