Above: The Fort Wayne Daisies in 1952. Wilma Briggs is in the lower right corner.

“Who are these people?” a 7-year-old EG Parks & Rec camper wonders, inspecting the photographs lining the lobby walls of East Greenwich High School. She slowly travels down the hall, taking notice of each individual memorialized on the EGHS Wall of Honor. As a newly minted EGHS graduate myself, I too have studied these photographs, reading the long list of achievements for each honoree. I’ve had that same look of bewilderment and intrigue and I quickly motioned the camper to one specific photo.

“Wilma Briggs,” she reads slowly, still sounding each letter out.

“I’ve met her,” I say and I excitedly begin to tell the camper about a life worthy of a Hollywood movie (perhaps one directed by Penny Marshall and starring Geena Davis and Tom Hanks). 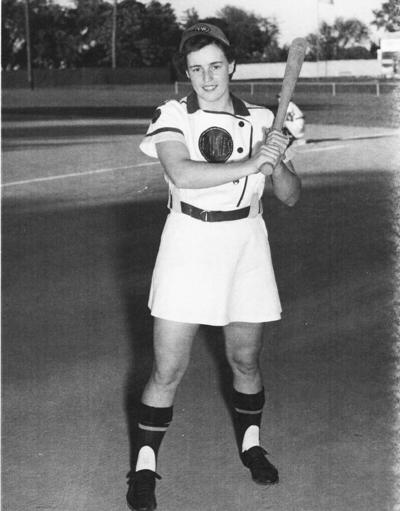 Briggs as a member of the Fort Wayne Daisies.

Briggs was born in 1930 and raised in East Greenwich, living on a family farm off Middle Road with her 10 brothers and sisters. It was on this dairy farm where she first developed a love for baseball, fielding ground balls as she played with her father and two older brothers after a long day of work. To Fred Briggs, himself a semi-pro baseball player, since Wilma worked on the farm with her brothers – “milking cows, cleaning the barn, feeding the cows, helping baling hay, working in the garden” – she should be able to play with them too. Briggs recalls playing for hours a day, her father hitting ground balls with impeccable accuracy. Despite all that was to come, her time playing on the farm, she said, was her “fondest moment of baseball.”

“He never missed,” she remarked, regarding her father’s skill. She and her brothers would beg him to hit.

Fred Briggs was quick to recognize his daughter’s talent, allowing her to play on his community team, the Frenchtown Farmers. While Wilma never started, Fred Briggs would always get her into the game for at least one at bat.

Nicola Carcieri, famed East Greenwich coach (and the “Carcieri” of EGHS’s Carcieri Field), pitched for the Frenchtown Farmers and encouraged Briggs to try out for the boy’s high school team. Since she was already playing “with all boys and men,” she decided, why not? She made Rhode Island history as the first girl to play on a boy’s varsity baseball team. Briggs was an immediate sensation, with people coming from all over the state to watch “the girl” play. She credits her fame to the late Providence Journal sportswriter Dick Reynolds, who she said gave  her “a lot of print.”

Moreover, Reynolds got her a second chance to try out for All-American Girls Professional Baseball League (AAGPBL) when she decided to skip a tryout in New Jersey so she could attend her high school graduation.

“You only graduate from high school once,” she said simply. 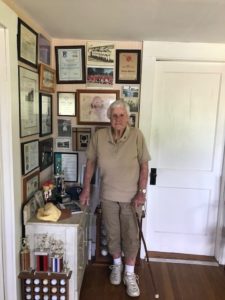 Wilma Briggs at her home in Wakefield.

So, on June 11, 1948, Wilma Briggs became the first of her family to graduate high school. Reynolds, meanwhile, put in a call to Max Carey, president of the AAGPBL and manager of the Fort Wayne Daisies, to allow her to try out in Indiana.

“I’d never seen so many balls flying in so many directions in my life,” Briggs said of the tryout. Coach Dick Bass was impressed, however, by her strong showing at the plate.

“If my fielding didn’t impress him, my batting sure did,” Briggs recalled.

Sure enough, she was invited to join the Fort Wayne Daisies, where she would play for the majority of her career. Within days of joining the team, Briggs was seeing playing time, even though she had known some rookies to spend the whole season on the bench. She attributed her rookie playing time to her ability to get her bat on the ball, regardless of the pitch.

Off the field, Briggs began to learn some of the more particular rules of the league. Players were required to wear skirts and stockings (not socks) whenever in public, with the thought that would help them to appear presentable. Briggs recollected how much players detested the socks rule.

“More players were fined for wearing socks than any other fine,” she recalled. Briggs herself didn’t mind the strict uniform code during games though.

“There were always shorts beneath the skirts so it didn’t make much of a difference,” she said.

Briggs said she learned a lot from coach Max Carey, who taught her “so many little things that nobody notices during the game.” During the two years Carey coached the Daisies, Briggs gained a deep understanding for her role batting second in the lineup. Throughout her career in the AAGPBL, Briggs became known as one of the league’s best hitters, leading the league in home runs in 1953 (9) and a fielder who could play virtually any position, from first base to outfield (in 1951 Briggs won the league-wide award for best defensive outfielder). She ended her career second on the AAGPBL’s all-time home run list, which is particularly impressive considering the league disbanded in 1954, when Briggs was only 23, with a full career still ahead of her.

Briggs eventually decided to go back to school and graduated with a teaching degree from the now-defunct Barrington College in 1969.

At Barrington, she still continued to dominate on the field, as captain of both the school’s softball and basketball team, winning her softball team’s MVP award at the end of the 1969 season. Although Briggs remained unmarried and never had children of her own, she became a school teacher in Wickford until her retirement in 1992 and coached youth softball leagues, having a profound effect on countless Rhode Island children, all the while attending AAGPBL reunions. She fondly reminisces about her career and the legacy she has left on women’s sports.

“We didn’t even know we were making American history,” she said.

For the majority of the twentieth century, most other Americans knew little of these pioneers or their legacy on women’s sports. After the release of the commercially successful film, A League of Their Own, the AAGPBL and its players finally received the recognition and appreciation they so deserved. Briggs found herself frequently sitting down for interviews over 40 years after her professional baseball career had ended.

In the time since the film’s release, Briggs has received numerous honors, from being elected to the AAGPBL’s first board of directors to having her career enshrined at the Baseball Hall of Fame in Cooperstown, New York. Locally, Briggs was the first woman inducted into the East Greenwich Athletic Hall of Fame and she inducted into the Rhode Island Heritage Hall of Fame, where 18 nieces and nephews came to help honor their aunt. 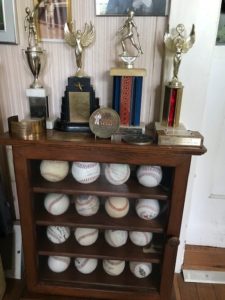 Just some of the memorabilia Wilma Briggs has at her home.

Yet, her proudest piece of memorabilia is not her Fungo bat, nor anything from her career in the AAGPBL. Rather, it is the first trophy she ever received. The trophy, which sits in the front room of her house in Wakefield, is a testament to her athletic abilities and sportsmanship during her four years at East Greenwich High School.

Although Briggs has traveled the nation and has garnered the highest honor any professional baseball player can with her spot in Cooperstown, Briggs still values her time in East Greenwich above it all, particularly her determination, dedication, and sportsmanship during her formative years.

As I chronicled the life and accomplishments of Wilma Briggs out in the hall during the first week of Parks & Rec camp, my young camper continuously found herself in Briggs. “I live on Middle Road,” she would say, or “I want to be a teacher when I’m older!”

Wilma Briggs is so much more than a Fort Wayne Daisy or a South Bend Blue Sox, but rather a role model for East Greenwich young people to follow our dreams and achieve greatness with humility and appreciation in tow.