EG Athletic Hall of Fame to Hold Ceremony in September 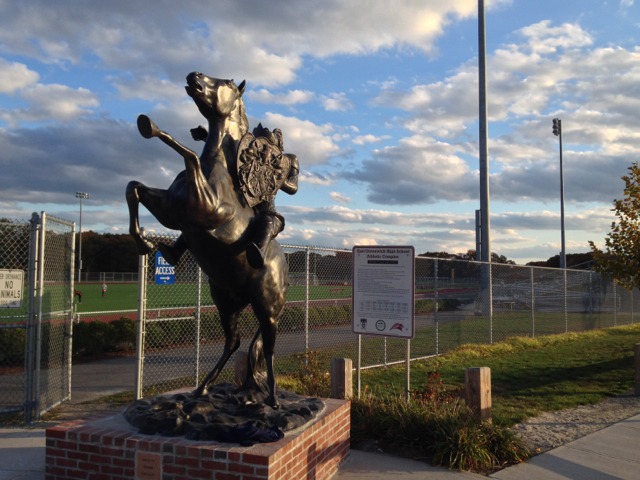 The coronavirus has been knocking out all types of events from regular classes to graduations to sporting events to business meetings to banquets.

With Rhode Island Gov. Gina Raimondo ramping up testing so the state can get back to business as usual, she is signaling that maybe, just maybe, we can restart our lives and, once again, do some of the things that give us joy and pleasure.

It is in this spirit that the East Greenwich Athletic Hall of Fame has announced that it will hold its annual Awards Banquet in September. Originally scheduled for April, it was one of the many events knocked out by Covid-19.

The exact date will be Sept. 19 at 2 p.m. at the East Greenwich Fireman’s Hall on Queen Street. Five former Avenger athletic standouts, one coach and one old-time star will be lauded and toasted at this year’s event.

The people being honored are: Roger Allard, a successful and popular EGHS wrestling coach; David Sayles, a three-sport success at EG, who later starred at New England College in hockey; Ann Eubanks, a four-sport luminary during her days in Avengerland, who took her skills to Stonehill; Katie Finn Newman, who stood out in field hockey and softball in high school and continued to do so at Fairfield University; Arthur “Pete” Huntington, who starred in football and track for The Crimson and went on to further accolades at Boston University and Brown on the gridiron; Andrew Henault, a three sporter in football, wrestling and baseball, who went on to wrestle at Springfield College.

Receiving the Old Timer Award will be Ray Johnson, a speedster back in the day for EGHS on the gridiron, who now makes his mark as a photographer on EG Then & Now.

“It is amazing when you look at it,” said EGAHOF Committeeman Guy Asadorian, “that EG, one of the smallest schools in the state has put out so many outstanding athletes. We hope the family, friends, teammates and classmates of this year’s class will come out to celebrate them September 19.”

Tickets for the event are $35 and can be had by contacting Committeeman Jeff Santos at [email protected], or at (401) 884-3513. Tickets should be going fast and the Fireman’s Hall has a capacity limit so make sure you get your order in to save a seat for this prestigious event.