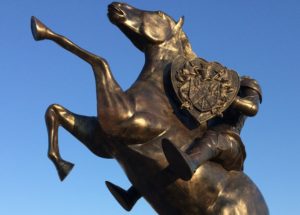 The East Greenwich Athletic Hall of Fame will honor its 2018 slate of inductees as well as present special awards and the two Ucci Award scholarship recipients at its annual banquet Saturday, May 5, at the Quonset “O” Club.

Michael Kamin, Class of 1991: A four-year varsity track and three-year basketball star, Kamin was a three-time All State shot put champion and javelin thrower. He holds school records in both events.

In basketball he was All State leading team to a State title and was a Street & Smith Honorable Mention All America. He helped EG to 1991 Class B State hoop title and was a Providence Journal Honor Roll Nominee.

At the University of Illinois he was a two-time letter winner in javelin and is one of the Illini’s top ten throwers of All-Time. In 1992 he was Top Male Student-Athlete and was All Academic Big Ten three times, also winning U of I’s prestigious George Huff Award.

In college Balcom played club basketball one year and club soccer one year but made her mark running varsity cross country and track for the Fordham Rams. She was named All Patriot League in 1992 and placed in the PL’s top 15 Indoor track times for the Mile and the 3000. Her running sparked Fordham’s Patriot League title in 1990 and Metropolitan crown in 1992.

Stephanie Balkcom Gloria continues her running to this day and took a first place in the Don Davis Memorial 5K. She has also been a high finisher in several other Road Races in the Ocean State.

Robert J. Corr, Class of 1976: A first team All Class B selection in football at EGHS. Also a member of the track team. Next, at Governor Dummer Academy he played football and lacrosse and was named 2nd team Boston Globe Independent Prep Team as running back.

At Muhlenberg College in Pennsylvania, Bob was a four-year starter in Lacrosse and a three-year starter in football. He came to EGHS as a Freshman football coach and also did JV and assistant varsity before taking over the reins in 2002. As Head Varsity Coach he turned out an undefeated regular season team in 2004, which lost in playoff semi-finals. In 2005 EG lost in semis again, but in 2006 Bob piloted the Division iii Super Bowl champions. 2007 saw them rush into the semi-finals again before losing.

Chris Della Grotta, Class of 1983: A four-year hockey standout for the Ice Avengers, he graduated in the top 10 of his class. Made the Phi Beta Kaplan Society and was first team All Division. Selected to RI All Star team, which won the 1983 New England Yankee Conference Tournament. He played in 127 games at EG and had 80 goals and 138 assists, giving him the All Time scoring record at 218 points. He was named MVP twice and his teams won Met B crowns three times.

Allen Pritchard, Class of 1978: A four-year starter in both football and baseball and a three-year starter in wrestling, Pritchard was All Conference as an Outfielder (JR) and as a pitcher (SR) and was co-MVP. In wrestling he came in fourth in state at 185 as a senior.

He was one of two people ever outside of Warwick to be asked to play for Warwick’s American Legion Shields Post #43. At Elon College he was best pitcher in ’80 and ’81 and was #2 in the NAIA in ERA. He also won NAIA All District and All Conference honors and had school honors in victories and ERA marks.

He was elected to the Elon College Sports Hall of Fame and chosen to throw out the first pitch when Elon celebrated 100 years of baseball in a game versus Brown. He was invited to the St. Louis Cardinals for a tryout and played for the Johnson City Cardinals minor league team.

Stephen DiIuro, Class of 1992: Wrestling, football and baseball at EGHS, while playing soccer for EGSA travel teams during that period. DiIuro was a Wrestling All Stater and the 145-pound champion, also making All League. He was the Class B Sectional Champion. The team’s captain he was chosen as a Providence Journal Bulletin Winter All Star.

In football he was second team All State, first team All League, the Thanksgiving Day MVP and his team’s MVP. Steve was also named the Dr. Uno Uustal Award winner and EGHS Most Outstanding Male Athlete Award winner. He also served as student council president for two years. He graduated from URI with a B.S. in Management Science and Information Systems.

Kristen Manson, Class of 1995: A field hockey, basketball and softball star at East G., Manson went on to star in field hockey at James Madison University and coach at Central Michigan and then back at JMU. In field hockey she was All Division twice and All State twice while leading her team to state titles. She made All Tournament  and was the defensive MVP in the state All Star game. She also served as the Avenger captain.

In basketball she made All Division twice and was also Honorable Mention All State.

At James Madison, Kristen grabbed All Conference honors and was a NCAA Regional All American second teamer. She was the Lady Dukes team captain, team MVP and played in the North-South Senior All Star Game. In her time at JMU they were CAA Champs, an NCAA Final Four team, and were ranked in the top ten.

As an Assistant Coach at Central Michigan, she helped the Lady Chips take the 2002 MAC Field Hockey Championship.

The EGAHOF will also be honoring three local residents with special awards – Kerri Withrow Valentine, who will receive the Special Recognition Award; and Fred “BeBe” MacDonald and Bruce Roberts, will be presented with Golden Avenger Awards.

The Special Recognition Award goes to an Individual who has given of themselves selflessly in supports of athletics in the Town of East Greenwich and whose efforts are integral in perpetuating the town’s athletic tradition.

The Golden Avenger Awards are given to individual, who grew up in the town, had success

in athletics and have given back to the EG community throughout their lives, and, whose efforts have laid the groundwork for the town’s athletic tradition.

Kerri Withrow Valentine was a four-year field hockey standout at EGHS and captained the team her senior year. She returned the next year as an Assistant Coach and was part of the program, which won four state and seven division titles.

In 2004 she became EGYFH president, a program that has grown and grown under her direction. The EGYFH runs spring clinics, leagues and summer camps. It sponsors a high school summer league and a fall program.

In 2017, Valentine was nominated for the NFHCA Junior Hockey Award.

He served in the Korean War and, while in the service, also played baseball for his base team.

A lifelong quahaugger, MacDonald is still bullraking at the age of 86. He managed the Shell Fishermen’s Co-Op, Eastern Seafood, started Independent Fishermen’s Co-Op and built 10 condos on his property off Forge Road. To give back to his community, “BeBe” started a scholarship program for the children of quahauggers.

Bruce Roberts played for East Greenwich High School in the 1960s. He jokes that he had an intimate relationship with future Rhode Island Governor Don Carcieri, as Roberts was the center and Carcieri the quarterback. Bruce also played for the excellent EG Townie teams of the early to mid ‘60s. Those teams won both the Rhode Island Semi-Pro Championship with an unbeaten season, and the next year took the Southeastern Massachusetts title with a 9-1 record.

After serving in the U.S. Marine Corps, Bruce coached lacrosse at schools out of state before moving back to East Greenwich and joining the LAX staff at East Greenwich High School, where he has been a valuable contributor to the success that Avenger teams have had on the lacrosse pitch.

Andrew Blessing, a three-sport athlete in football, basketball, baseball, plus a few others, and Jennifer Imbriglio, a four-sport athlete, have been chosen as the 2018 Ucci Award winners. They are both from East Greenwich High School.

Very active in the school, he was on the student council, Prom Committee and the Future Business Leaders of America. He helps out in the community by working with the EG Youth Basketball Association and is a camp counselor for Safety Town of East Greenwich, and is a standard bearer for the CVS Charity Golf Classic. He also served as a counselor for the East Greenwich Parks and Recreation and ran a pet-sitting business.

Andrew is a National Honor Society Member, a Rhode Island Scholar-Athlete Award winner, was second team All Division in football and made the All Academic team.

Blessing was a National Leadership Conference Qualifier for FBLA and helped EGHS to the freshman state title in cross country as a freshman. He was also named a Rhode Island Scholar Athlete in football.

Andrew is deciding between Bentley (for football), Holy Cross and Fordham (where he might walk on) and Boston College (for school only).

Imbriglio is equally accomplished. She played field hockey for four years, ran outdoor track for four and ice hockey for three with one year in indoor track.

She was on student council for four years, and the same with International Club, EG AfterProm, Airband and The Crimson Yearbook. To a lesser degree she was also involved with Avengers for Animals, Prom Committee, and the marching band.

Imbriglio has also been nominated for the coveted annual SLTP Student Leader of the Year Award 2016-17, is a national Honor Society member, earned an Honorable Mention for the Premio de Plata (National Spanish Exam), was an AP Scholar, won the George Eastman Young Leaders Award and the Rhode Island Scholar Athlete Award.

Jennifer will attend Quinnipiac University in the fall and will play either club field hockey or varsity ice hockey.

A note: The format for the Anthony “Tar Tar” Ucci Awards will change slightly for next year. A new application has been formulated and it will be distributed and announced at East Greenwich High School in early January. There will be a two-month period to apply and the applications will be submitted to Anthony Ucci, who will head a committee of Vincent and Joseph Ucci, David Ucci Sr. and Bruce Mastracchio, all nephews of East Greenwich’s true athletic legend. Winners receive a dinner, a plaque and a monetary scholarship award.