The East Greenwich High School Wall of Honor Class for April of 2019 has been named. Being honored in ceremonies next April are: Dr. Herbert Brennan, Barbara LaPlume, Tom Wort, Aaron Guckian and Leigh Carney.

Dr. Brennan practices in East Greenwich. He attended Providence College and the Chicago College of Osteopathic Medicine and was a top flight student before completing his training at Brown University. He was also a member of both the East Greenwich and North Kingstown fire departments. He serves on a multitude of medical and physicians boards in Rhode Island. 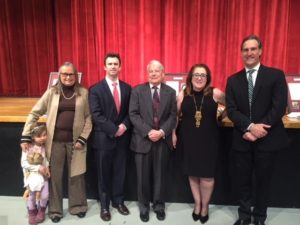 Barbara LaPlume graduated from Rhode Island School of Nursing and worked her way up to director of admissions. Besides her excellence in nursing, she also found time to volunteer with numerous boards and organizations here in Rhode Island.

Tom Wort was an All-Stater in football as a sophomore at EG High. Circumstances caused him to move away but he credits the East Greenwich schools and his coaches here as giving him the foundation he needed, which led to his success as a top notch D-1 player at Oklahoma and into the NFL.

Aaron Guckian has had a varied and interesting life. Though currently a sales coordinator for Washington Trust Company, he has been a business banking specialist, a special projects coordinator, was special assistant to the Governor of Rhode Island, was a teacher, and an opera singer.

Leigh Carney, currently the East Greenwich Town Clerk, has also led an interesting and varied life. She has been a model and beauty pageant contestant, coordinates both the EG Veterans Day and Memorial Day parades, is a third-degree black belt in karate, runs in mini-marathons and also spends a good deal of her time volunteering.

The 2019 Wall of Honor class will be honored at a ceremony in April. The exact day and time will be announced in January. For more information, contact Bob Houghtaling at 230-2246 or Bruce Mastracchio at 885-3160. The stickers will be on pizza boxes as reminders this Super Bowl Weekend The Super Bowl is an...