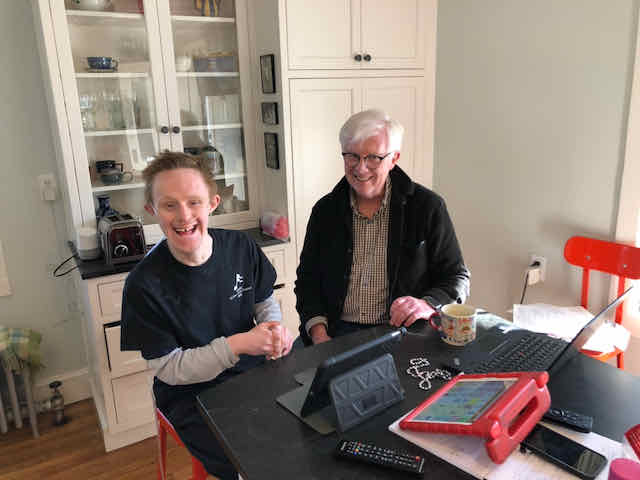 Above: James and Neal one year ago, at the start of pandemic living.

One year ago, I couldn’t wait for spring. Winter had been tough. As it happens, tough winters have come with the territory since our son James was born. Over the years, he’s spent one Thanksgiving, one Christmas, two New Year’s and a few Valentine’s Days in the hospital. James, who has Down syndrome, was born without an esophagus and with a floppy trachea, resulting in recurrent pneumonia. Now, at age 23, he has bronchiectasis (or as we just say, lousy lungs).

A year ago, he started getting sick in late fall and ended up in the hospital in mid-December. He came home, but on Christmas Eve he was feverish and three days later, he was back in the hospital. On New Year’s Eve, James’s oxygen saturation just kept getting worse and his chest was heaving with every breath. I knew what was coming. He needed to go on a ventilator. And so, at 1:30 a.m. the first day of 2020, the team crowded into his room and intubated him. I knew it was the right thing to do but I also knew it was no guarantee.

James was on the ventilator for a couple of weeks; he got feeding tube inserted during that time (his second – the first was put in the day after he was born and lasted for four years). He’d been aspirating food and liquid into his lungs. The specialists had recommended James get a feeding tube during his hospitalization in mid-December, but at that time it had been impossibly hard to consider. This is a person who loves food. Loves food. And he’d gone through three major surgeries and a boatload of procedures on his esophagus to give him the ability to eat without choking.

But James’s return to the ventilator (an old, if not fond, acquaintance) made the decision to accept a feeding tube a lot easier. Once he was discharged and back at home, there were some tense moments early on where he would try to take food out of the refrigerator. James is a loving, funny, peaceable person but he was angry about not being able to eat by mouth. And we couldn’t blame him. Because of the level of his developmental disability, he didn’t understand the connection between eating by mouth and illness. By some miraculous grace, however, James didn’t stay mad very long. He tried to eat – grabbing the yogurt container when we were out of the kitchen, eating that pancake we left by the stove – but the anger was gone. We got a child-lock for the fridge, then another one after he figured out the first one.

In early March 2020, James got sick again. On March 6, he was sick enough that, even with oxygen and various respiratory tools at home, he landed back at Rhode Island Hospital. With COVID-19 now in the state, the hospital was a different place. They weren’t going to let me stay with him as I usually do. They relented after a couple of nurses who’d come to know him earlier that winter said it would be ridiculous to have James there without a parent. I saw the mask shortage up close during that stay – nurses were only allowed to have one mask a week – one mask. Brown bags were taped to the wall in the hallway, each one bearing the name of a staffer. It was a mask repository, until the person returned for another shift.

James improved so quickly he was discharged the following Monday, March 9. We left the building just as officials there were setting up new protocols at the entrance to keep most people out – I couldn’t help feeling we were leaving just in time.

In the weeks that followed, suddenly everyone was talking about ventilators and respiratory distress and hospitals. It was as if the world had learned the language we’d learned through James these past couple decades. James was home (his program closed and outside caregivers banished) with his mom and dad. Our COVID-19 existence began. We knew the coronavirus would be awful for James, perhaps deadly, so it was easy to stay home. And quarantine worked for James – he was pretty healthy, with only a handful of illnesses and no trips to the hospital.

We found little COVID silver linings – a virtual music therapy session where we learned James knew his notes; virtual martial arts with the wonderfully patient Miss Chanel; James learned the YMCA song (!), and his dad expanded the nighttime rituals, singing whole concerts with him at bedtime. Then there were just the odd James things: how he liked to dress us those first first few months, bringing down shirts for us to wear, refusing in his quietly persistent (annoying?) way to let us say no. Never mind that he was bringing us HIS clothes, clothes for a person 5 feet tall and just shy of 100 pounds (hint: we’re considerably larger).

Summer got a little more exciting for James – he got to go to the Greenwich Club pool and to the beach, both popular destinations. We were grateful we could work easily from home; for me that wasn’t a change, but for Neal, it meant new routines he wasn’t sure he’d like. Yet, he and we adapted to this new life.

All the while, we just kept hoping the vaccines being created would be ready soon.

James’s life shrunk again once fall arrived. He handled it as he’s handled so much in his 23 years, with smiles and a matter-of-factness that I try hard to emulate.

When the vaccines arrived in December, we listened carefully for when James might be eligible. In mid-February, he got his first dose. He’s been fully vaccinated for a couple of weeks now. Neal and I both just got our second doses (his Pfizer, mine Moderna).

The world has reopened a bit. We are hoping James will be able to join a new program sometime this spring or summer. He’s done amazingly well with his virtual activities – including an awesome Special Olympics St. Patrick’s Day Dance the other night – but he misses being with others. We’ve learned that masks are an excellent idea to help keep James safe going forward, at least in the winter, since COVID-19 is only just one virus in a world full of them.

And it’s wonderful to think our other children, James’s sister and brother, can just come visit again, without having to quarantine for two weeks before and after.

I cried as I walked to the car after getting my second dose at the special clinic for people with disabilities and their caregivers Friday. Really, I’m a little awed by it all. And profoundly grateful. That spring I was so hungry for a year ago? We had to wait a year, but maybe it’s here now. 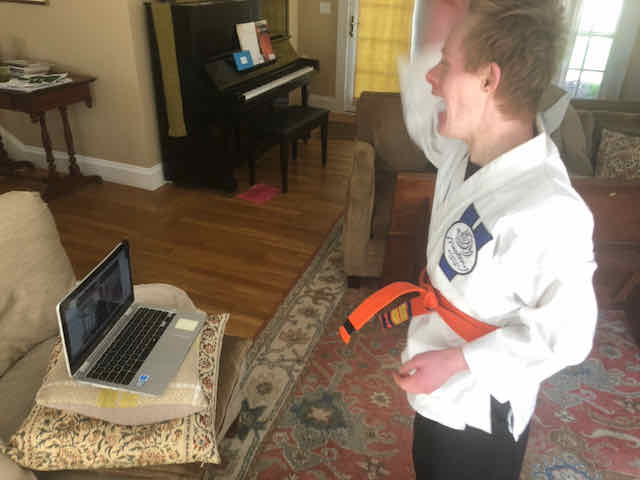 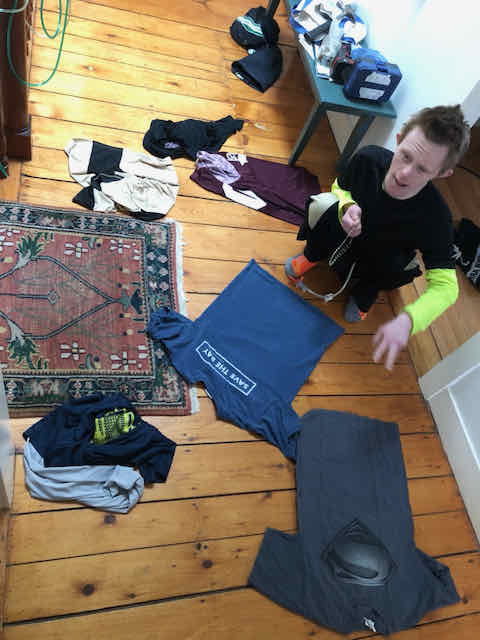 James deciding which shirt each of his parents should wear. 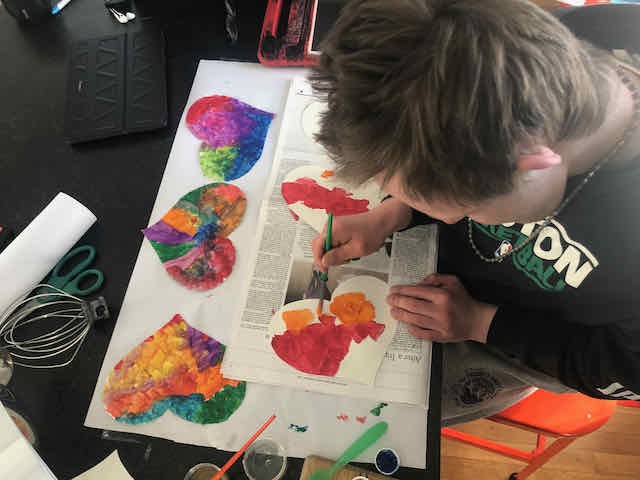