‘Do We Have Rights?’ Anti-School-Mask-Mandate Parents Gather 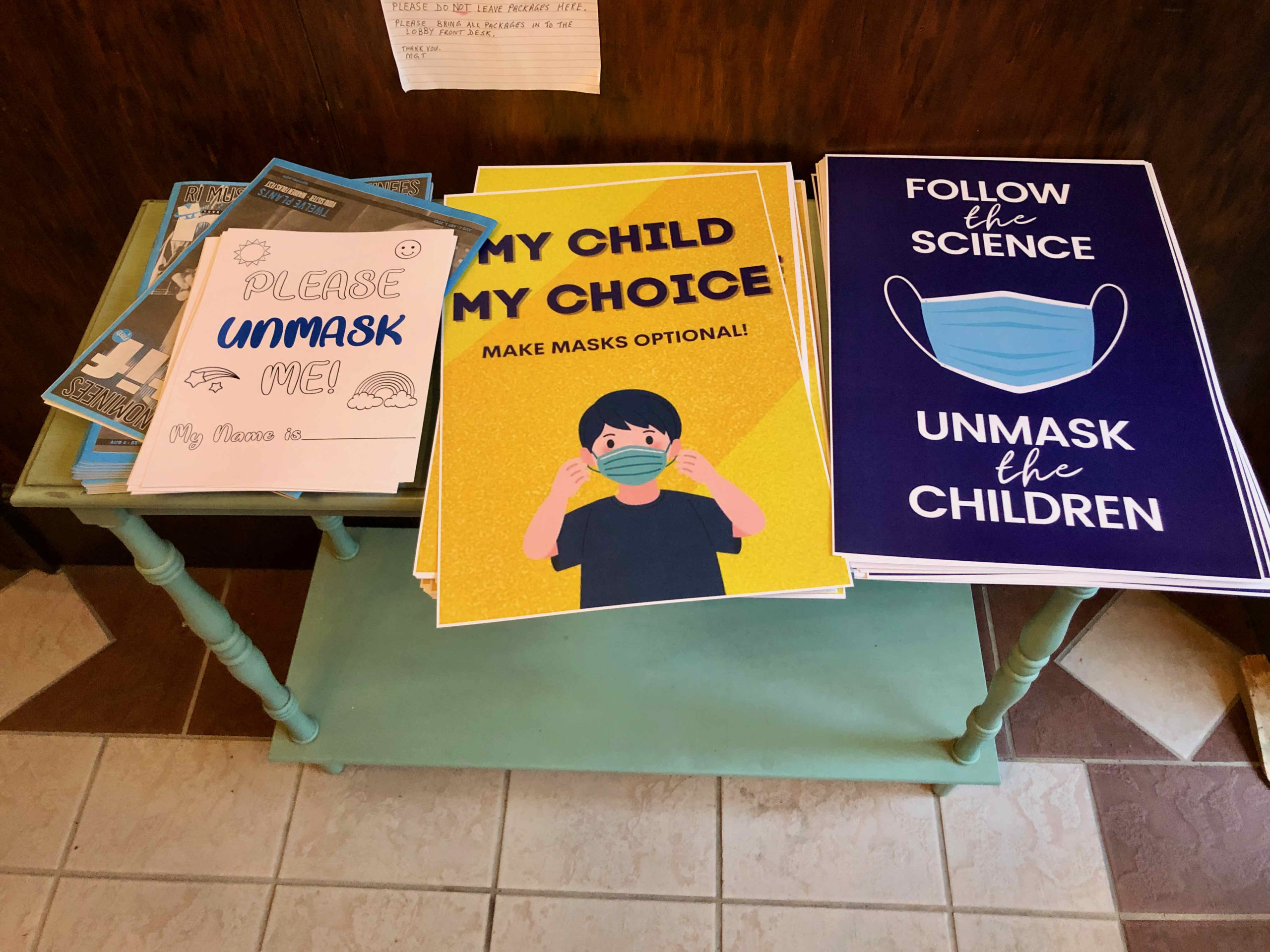 For Tracey Gritz, who has a child at Eldredge Elementary, the past school year was “very, very difficult.” That’s why she decided to attend the meeting Monday night at the Greenwich Hotel organized by parents who want school districts to allow choice when it comes to wearing masks come September.

Gritz’s child had a medical mask exemption but, she said, he was coerced into wearing one. Because of the exemption, he got extra “mask breaks” but that meant he missed out on some lessons. He had more anxiety and headaches and found it harder to breathe and concentrate, said Gritz, as well as fearing being yelled at.

Kim from Coventry (she declined to give her last name), was there because a friend invited her. “I’m just concerned about the continued use of masks in the schools,” she said. Masks are “certainly unhealthy” – she was worried about all the bacteria she said must build up in the masks after several hours –  and “definitely unnecessary” – because the rate of COVID-19 is low in Rhode Island now. Regarding the Delta variant, “I don’t think it warrants us taking such drastic measures when cases are so low,” she said.

Cases in Rhode Island are rising, with more than 250 new COVID cases Aug. 5, up from 13 cases July 5. That’s far from the 1,500+ daily cases seen in last December and January but the the rate of infection is “high” – 136 new cases for every 100,000 people. That’s because the Delta variant is nearly twice as contagious as the original variant. (Find the RIDOH data HERE.)

Around 80 to 90 people were in attendance Monday, including some children. In addition to East Greenwich residents, people were there from Warwick, Coventry, and North Kingstown. EG parent Lisa Pomeroy welcomed everyone and said one of the purposes of the event was to connect with people but also to understand what parents could do, including the mechanics of how to make a public statement at a School Committee meeting.

Last year, former Gov. Gina Raimondo issued a statewide mask mandate for K-12 schools (and just about every other indoor space), but this year Gov. Dan McKee is stopping short of that,  “strongly recommending” universal K-12 masking, but leaving the ultimate decision up to individual school districts. The EG School Committee will be discussing its COVID-19 policies at its meeting Tuesday (8/10).

Maddalena Cirignotta, from South Kingstown, and Cherie Waluk, from Portsmouth – who have become leaders in their communities regarding parent-choice on masking – also spoke. Cirignotta recommended that people attend their local School Committee meetings and speak, suggesting that personal anecdotes go over best. She encouraged speakers to make eye contact with the School Committee and to be polite but to come armed with data.

Waluk brought more fire to the meeting, prompting cheers a couple of times, in particular when she said, “Do we have rights or do we not? This starts with masks. It doesn’t end with masks.” Still, Waluk said, the current effort was focused on masks exclusively.

Turner mentioned he saw EG School Committee member Tim Munoz in the crowd and Munoz ended up speaking Monday as well. He told the maskless crowd he was wearing a mask because he’d been in a meeting with someone who ended up testing positive for COVID-19 last week. He’d recently tested negative but was a bit “spooked.”

In an interview after the meeting, Munoz said he encouraged those from EG in attendance to come to School Committee meetings and speak their mind. He said he emphasized that no decision had been made and probably wouldn’t be made at the meeting Tuesday since they have until the end of the month to send their recommendation to the state Department of Education. Munoz said he fielded questions from the attendees for around 20 minutes and that  things got a little heated when one man seated at the bar kept yelling at him while Munoz said he was trying to hear from an older woman who had been speaking. But, he said, he was glad he attended.

The School Committee will discuss a revised COVID-19 policy – including how to handle masks – at its meeting Tuesday (8/10). Find the agenda HERE.