Discovery of a National Treasure

A sad and desperate letter, written during the Revolutionary War by a Rhode Island African American soldier, reminds us that war is hell

Varnum Armory Museum Director Patrick Donovan with a visiting family who were excited to get their picture taken with this historically important letter.

Tired and tempted to just throw it all away, I stuck my hand one more time into a large moldy cardboard box filled with random receipts, notes, and other mid-20th century detritus. It had belonged to one of our founding members who had long since passed. Digging through this old box was part of a (still ongoing) gargantuan effort to properly repack everything in storage at the Varnum Armory Museum located at 6 Main St. here in East Greenwich. Anyway, I grabbed another fistful of paper from the box. But this time my fingers felt something…different….OLD paper? I carefully pulled it out. This was clearly 18th century paper and it appeared to be a letter. Torn in four pieces, the fragile document had been crudely glued to a more modern piece of white paper.  What I read blew my mind.

Onered Master & Mistress I take this opportunity to inform you of my citiation att this time & desire your ade = after I drove 3 waggons as far as Windham I hade waggoner tookaway my badge of driving & ordered me to gard ye waggons which I refused & turned back to colonel green att Covintree & ye wagoner sent back two men after me Ye Colonal did not blame me but told ye men and me to go on again & that I should take my waggon again but being over worried with this tramp I got but 3 miles further than where I left ye waggons in So. Windham att ye house of one Dan Murdock where I have been confined with my old fits But have good care taken of me But I have a desire to Return to you Not having any money Nor Clows fit to wair & all strangers to me makes it something difficult for me I have had a Doctor and a Surgans mate to me which advize me to go to xxx corps of invalids at Boston where I may be under half pay During Life Remaining in this poor State of Body But I ante able to go thether Neither do I incline to with out advice from you But I have a desire that Master or Mistress would go to Colonel Green & see if you cant git me Discharged from ye War, it being very Disagreabell to my mind as well as Destructive to my helth I suppose I could ride on a horse or att least in a Slay if you could obtain a Discharge for me So that I may Return to my Master and his family again baring[?] the will of god & your pleasure So No more att this time But I Remain your humble & dutiful Thomas ‘N’ His mark

December 31 1780 These lines I recv’d from ye Surgeon’s mate where as Thomas Nickols a soldier belonging to ye first Regiment in Rhode Island State hath been for some time attended with fits in this place & still likely to Remain unfit for military life.

Freed from enslavement in exchange for his service in Colonel Christopher Greene’s First Rhode Island Regiment, African American Thomas Nichols had written (by dictating to an unknown person) this letter to his former “master and mistress,” Benjamin and Phoebe Nichols of Warwick. They owned a farm near the town line with East Greenwich at the time. Thomas is asking for their help in getting a discharge from service since the war had been, as he said, “very disagreeable to [his] mind as well as destructive to [his] health.”  Thomas signs the letter with his mark, “N,” making it clear that he had dictated it to someone else. Perhaps the scribe was the surgeon’s mate, who is mentioned at the end of the letter as having received “these lines” and noting that Thomas is unfit for continued military service and will likely remain so into the future.  It’s not clear if “these lines” refer to the preceding or subsequent content (or both?). I think “these lines” refers to the statement starting with “whereas…”.

Sadly, Thomas would not be granted a discharge. Instead he was transferred on March 1, 1781, to the Corps of Invalids – at half pay – then located at Boston. The Invalid Corps was created as a means for sick or wounded soldiers to continue to serve (mostly as guards) if their condition was deemed not too severe. Although both a doctor and surgeon’s mate had suggested he go to the Invalid Corps, Thomas said he didn’t want to go without first getting advice from his former master. However, we do not know if Benjamin or Phoebe Nichols ever responded to his plea for help. What happened to Thomas after his transfer is also not known. What did he do in the Invalid Corps? Did he survive the war? Did he return home and live out his life as a free man? Did he marry and have a family? Are there direct descendants alive today? I’m still hoping to find answers to these questions and more.

We do know that Thomas became free from enslavement when he enlisted into the 1st Rhode Island Regiment on May 22, 1778, at Warwick. He went through training and drill in next door East Greenwich. After the devastation of the Philadelphia campaign and the long winter at Valley Forge, General James Mitchell Varnum of East Greenwich had presented to General Washington a plan to raise more troops in Rhode Island by granting freedom to enslaved people in exchange for their service. Washington did not oppose the plan. The R.I. General Assembly soon put it into law and included a provision to pay slaveholders for the loss of their “property.” The policy to allow “every able-bodied negro, mulatto, or Indian man slave” to serve turned out to be quite unpopular. And so, the policy was ended in June of that same year. With only this small window of opportunity, less than 200 African Americans ended up serving in the unit.

Just three months after enlisting, Thomas would experience his first, and probably last, combat at the Battle of Rhode Island on August 29. After a failed attempt to besiege Newport and force the evacuation of the Crown forces from Aquidneck Island, American forces began withdrawing to the north. The green, untested 1st Rhode Island Regiment played a role in helping to hold off attacks by British and Hessian forces as the main American force under General Sullivan’s command retreated.  The 1st RI had 3 men killed, 9 wounded, and 11 missing in action. Thomas Nichols was among the wounded. How he was wounded and how severely is unknown. This combat experience may very well be the explanation for the mentions of his “old fits.” Perhaps there was some sort of neurological damage caused by a Crown musket ball. And/or maybe the experience left him mentally affected. He did say specifically that “War [was] very disagreeable to [his] mind…”.

This letter, written two years after the Battle of Rhode Island, is emotionally charged. He pitifully says he has “no money nor clothes fit to wear.” And reading that everyone is a stranger to him leaves me with the impression he is feeling helpless, scared, and alone. You can’t help but feel sad for Thomas’s plight and his desperate wish to go home. How bad could things have been for him to wish he could “return to [his] Master”? Did Thomas know whether this meant returning to a state of enslavement? Was he suffering from PTSD?

Historical letters and documents can raise more questions than they answer sometimes. Regardless, this ragged old little piece of paper gives us an incredibly rare and unique view inside the life of a black soldier serving and fighting for the American cause in its War of Independence. Roughly 7,000 African Americans served that cause between 1775 and 1783.

It is worth noting that very little material culture and written records exist today from the Revolutionary War compared to more recent military conflicts. This lack of primary source material makes it much more difficult for us to have a full and accurate understanding of our shared birth and national development as Americans. As you might imagine, there is even less original source material related to the experiences of people of color and their important contributions during this period. So I think that makes this letter a national treasure.

This astoundingly rare artifact highlighting the horrors, misery, and drudgery of war has been conserved by a professional document conservator and properly framed for long term display. It is now on display in our 18th Century Room at the Varnum Armory Museum. 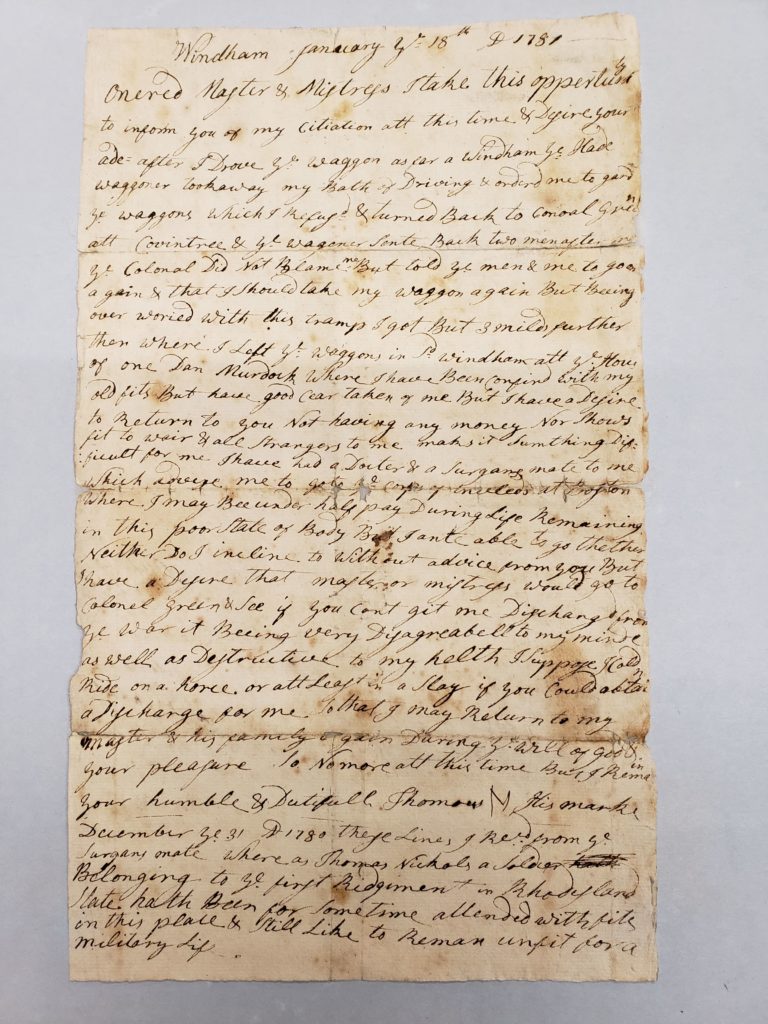 A scan of the 1781 dated letter dictated by Pvt. Thomas Nichols who desperately wanted to go home.