Dining – Outdoors! – Returns to EG at Handful of Restaurants 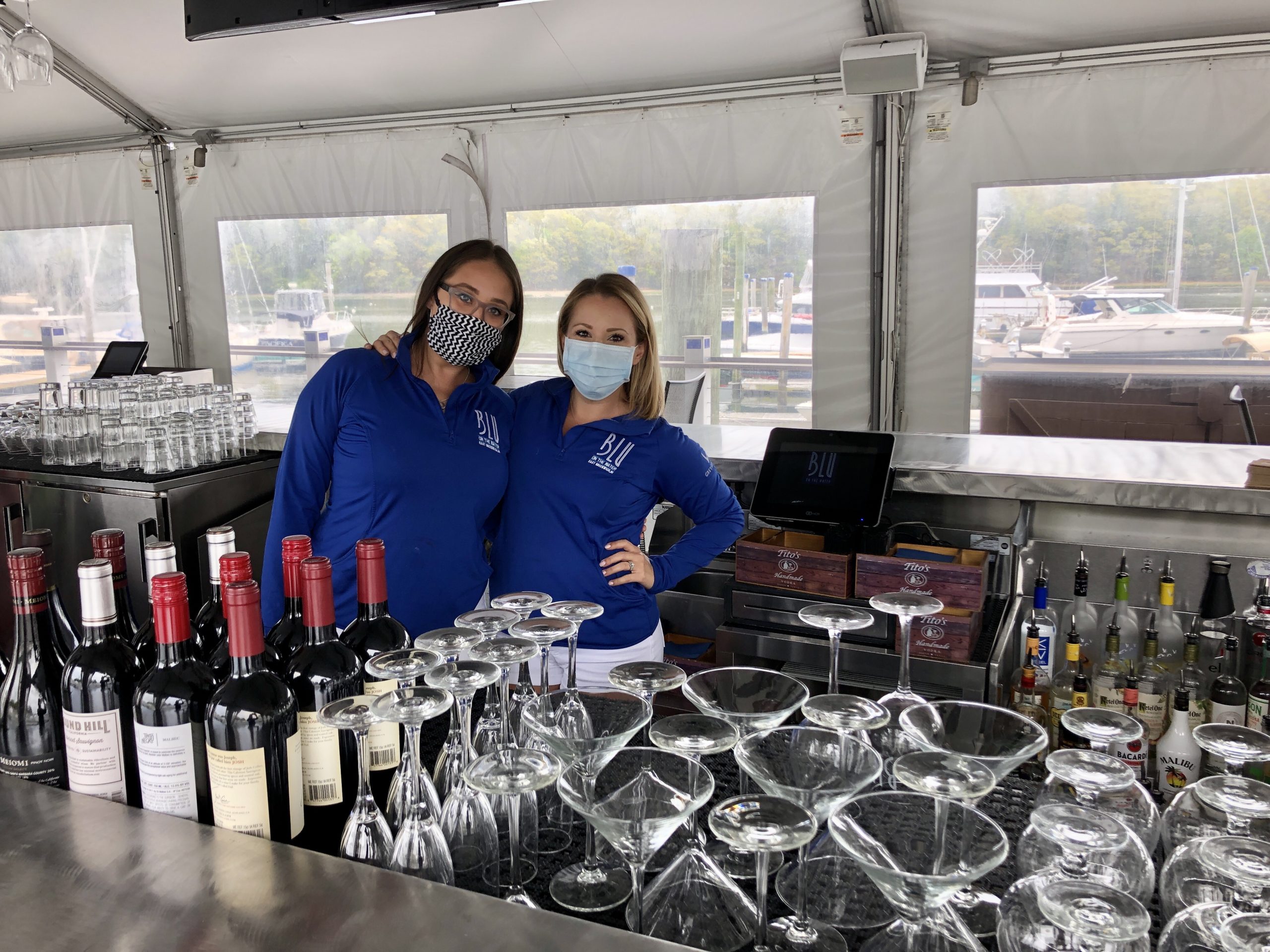 Two months after Gov. Gina Raimondo closed restaurants, diners and cafes to eat-in dining, a few local restaurants are once again welcoming customers to eat outdoors at their establishments.

Not surprisingly, the waterfront restaurants – already set up for serving outdoors – are the first to reopen. On Monday, May 18, the first day outdoor dining was allowed, Blu on the Water opened for lunch, with a plan to be open seven days a week for the rest of the season. Finn’s Harborside will follow on Wednesday, and Nautika opens Friday. All three will have 20 tables – the maximum allowed during the state’s Phase I reopening.

Among the state guidelines, customers must make reservations ahead of time, parties will be limited to five or fewer, tables must be 8 feet apart and everyone – customers and servers alike – are asked to wear face covers except when eating or drinking.

Huck’s Filling Station, just over the EG-Warwick line on Main Street, will reopen starting Thursday, with a plan to be open Thursdays through Sundays for lunch, brunch and dinner. Huck’s has a built-in advantage since, like the waterfront venues, it has an outdoor emphasis.

So far, only a couple of restaurants have applied for special outdoor dining permits the Town of East Greenwich is allowing during the COVID-19 crisis. Richard’s Pub and Ritrovo – both owned by the Mignanelli family – began welcoming diners Monday, Ritrovo on the covered porch and Richard’s on the side of the building (they a tent coming Wednesday for more protection from the elements).

Carol Finn stands in one of the outdoor dining areas Finn’s Harborside will use.

And Tavern on Main has applied to be able to seat people behind their building, using part of their parking lot. They already are allowed to have some tables on the sidewalk in front. On Monday, Venus Burgo and Frank Sparadeo, who live across the street from the restaurant, were among the first to take advantage.

“We looked out the window and saw the tables, checked the date and ran over!” said Sparadeo. “People are driving by and waving.”

“It feels fantastic,” said Burgo. They both had masks but had taken them off to their drinks arrived.

For some, even those with outdoor space, opening during Phase I doesn’t make sense.

“Takeout is sustainable right now,” said Siena co-owner Chris Tarro. Siena does seat people outside during the summer months but Tarra said they decided against it for now. “You have to prep up for it, you have to bring staff in for it, then if it’s windy, if it rains, then there are no customers,” he said.

Tarro said they would continue to do takeout and said both customers and staff have been “amazing” during the crisis.

“We’re not making money but the loss is manageable and we’re keeping our staff employed with benefits,” he said. By providing more than the usual takeout food, “we’ve allowed special moments to occur … it’s a real sit down meal.”

But Tarro said they were eager to start in-restaurant dining again. “We are focusing on how we can be the best, safest restaurant to bring people inside.”

If you know of a restaurant in East Greenwich or nearby Warwick that’s open for outdoor dining, let us know! And find a link to our EG takeout guide HERE.