Winsor Fry fought in Revolutionary War battles, including the Battle of Red Bank and the Battle of Yorktown. He withstood the terrible winter at Valley Forge. He was pardoned by Gen. George Washington. He was a former slave. He was from East Greenwich.

We don’t tend to think about slaves here in East Greenwich. But ask Bruce MacGunnigle, our resident historian. Or ask Winsor Fry’s descendents, five of whom have been inducted into the Daughters of the American Revolution. Slavery may have ended here decades before the Civil War, but slaves are a part of the history of East Greenwich.

Winsor Fry, who died 1823, had been forgotten until very recently, when his history as a patriot of the Revolutionary War was uncovered, and his grave, sitting just outside Glenwood Cemetery in a private backyard, was finally identified.

His family, in Massachusetts, Baltimore, and beyond, gathered in East Greenwich earlier this month to mark the gravesite designation of their ancestor as well as the 90th birthday of Fry descendent Barbara Boyd. The East Greenwich Historic Preservation Society hosted the event at their headquarters, the Old Jail on Water Street, including a ceremony that had been planned for the graveside but had to be brought indoors because of the rain.

The discovery of Winsor Fry’s gravesite was some serendipity: a combination of Bruce MacGunnigle’s research, Winsor’s ancestors’ interest, and a homeowner with knowledge that someone was buried on her property.

Winsor Fry had been the property of one Thomas Fry, according to a document uncovered by MacGunnigle. He had been willed to one of Thomas Fry’s children, Joseph, but sometime between the writing of the will in 1773 and Winsor’s enlistment in Continental Army in 1775, he must have been freed. Fry was still in the army in 1780, but his story took an improbable turn, as recounted by Barbara Boyd in the video clip below. He was caught stealing from the military commissary – “a quantity of beef, candles and rum” as well as some meal. He was sentenced to death, but an appeal to Gen. Washington through his commanding officer, Col. Christopher Greene, seems have to worked. Washington granted clemency. Fry fought with the army for three more years and, eventually, was granted a pension for his service.

As MacGunnigle states in his very engaging article about Fry (find it here: Winsor Fry / Rhode Island Roots), it’s not exactly clear why the town ended up bequeathing burial land for Fry and some family members, but the records show they did. That’s where Joyce Shaw enters the picture. When she and her husband bought their house on Hemlock Drive in 1970, there was a small cross in the backyard, not far from the boundary with Glenwood Cemetery (which sits on the southwest corner of Middle and Cedar streets). 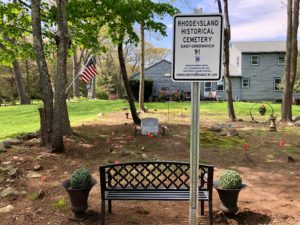 Boyd, her two sisters and two daughters have since the discovery of their connection to Winsor Fry, have been inducted into the Daughters of the American Revolution. MacGunnigle, who’s worked proved pivotal in that discovery, spoke of Winsor Fry at their induction in 2016.

*The grave is clearly visible from the top of Glenwood Cemetery, but is on private property.